Over the past six years, PG&E (NYSE:PCG) has been responsible for 1,500 fires in California, one of which was the Camp Fire, the deadliest fire in the state's history. Pacific Gas and Electric Company, which is a subsidiary of PG&E is, "one of the largest combined natural gas and electric energy companies in the United States," according to the company.

Pacific Gas and Electric is now being linked to the Kincade Fire, which burned 77,758 acres in Sonoma County in 13 days before being fully contained earlier this month. U.S. District Judge William Alsup ordered PG&E to answer questions regarding the Kincade Fire and blackouts throughout the state. The day after the Kincade Fire began, state regulators told PG&E that a jumper cable on one of its transmission towers had broken around the same time and in the same area as the Kincade Fire. But, what does all this damage mean for PG&E and its investors? 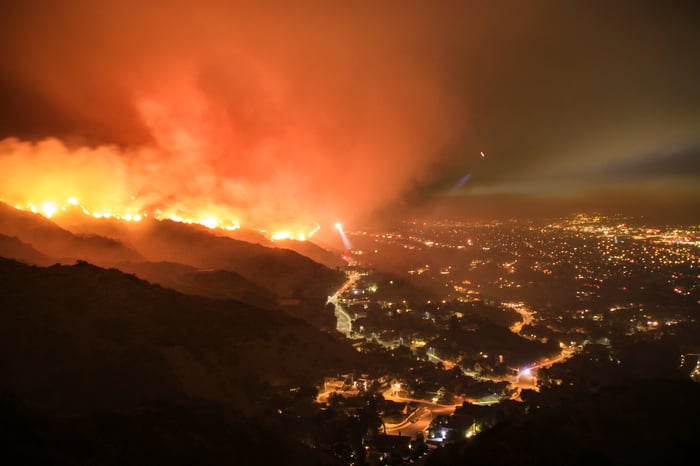 On Jan. 29, 2019, PG&E filed for Chapter 11 bankruptcy as it was tied to a string of devastating fires throughout Northern California in 2017 and 2018. PG&E faces an estimated $30 billion in liabilities related to these wildfires. The fires have caused property damage, power outages, and deaths. Now, PG&E is offering $13.5 billion to California wildfire victims as part of its restructuring plan.

California's Governor Gavin Newsom said, "My administration will continue working to ensure that Californians have access to safe, reliable and affordable service, that victims and employees are treated fairly, and that California continues to make forward progress on our climate change goals."

In a September press release, California Public Utilities Commission (CPUC) set the stage to evaluate the reorganization of PG&E under Chapter 11 bankruptcy. The CPUC opened a formal proceeding to consider ratemaking and a proposed reorganization plan for resolution of the case filed by PG&E.

Lawmakers in California gave PG&E until June 30, 2020 to end its bankruptcy or forfeit billions of dollars to a state fund to help pay for future wildfire claims. PG&E is also required to spend a minimum of $5 billion on safety improvements to gain access to the fund. In an effort to speed up the bankruptcy case, Newsom called upon PG&E's executives, creditors, shareholders, and wildfire victims to reach a resolution before next year's wildfire season between June and September.

Newsom hopes that PG&E stakeholders can create a bright future for the company by reaching a negotiated resolution. If an agreement is not quickly reached to begin the transformation process, the state of California will step in and take restructuring PG&E into its own hands.

State representatives and mayors around the state are backing Newsom's plan for a state takeover of the utility if agreements and resolutions are not met by the deadline. Rep. Ro Khanna accused PG&E of having a for-profit motive and caring more about high executive salaries and payouts over safety and infrastructure upgrades.

Climate change is a big factor in why utilities around the country are struggling. Extreme weather events, such as wildfires and high winds are putting U.S. utilities at an increasing risk of damage to their plants, and in turn, their stock prices. According to BlackRock (NYSE:BLK) research, utility companies that don't prepare for extreme weather events related to climate change will trade at a discount and affect long term investors.

Washington-based research giant, Center for Climate and Energy Solutions (C2ES) said climate change risk is often "too difficult to assess because of the long time frames involved, the lack of location-specific data and scientific uncertainty. It is often difficult to generate the type of black-and-white data needed to drive action."

In C2ES' annual survey, 40 companies addressed climate change and extreme weather to their financial filings and it was discussed in 47 sustainability reports.

Amid uncertainty, PG&E's shares have fluctuated wildly over the past few days, but still nowhere near where they were at before the fires ravished the state.

PG&E has a profit margin of -53.15, which could scare investors into selling their shares and stopping potential investors from starting a new position in the utility. PG&E has a forward P/E of 1.67 compared to NRG Energy's (NYSE:NRG) 9.57. PG&E's five-year PEG ratio is 0.29 while NRG Energy is at 0.34. While PG&E is certainly a cheaper buy than NRG, all the uncertainty surrounding the utility's future is an indication that investors looking to make the most out of their investment by getting out before shares hit another all-time low.