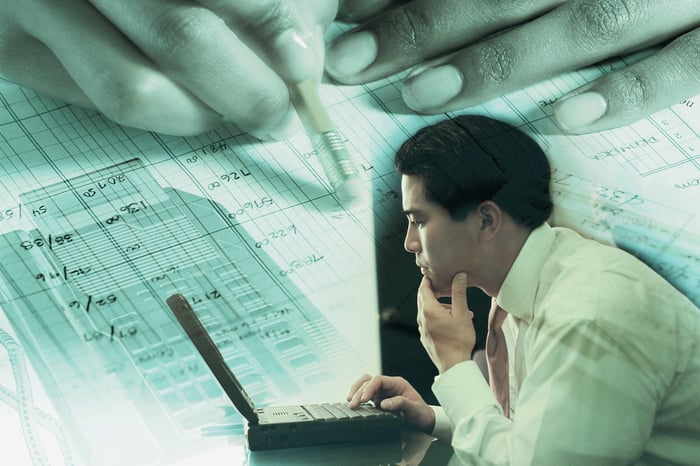 One way to measure whether a company is financially successful is to look at how much of a return it earns on the capital it invests in its business. The return on invested capital, or ROIC, compares the profit that a company generates to the amount it spends on assets that generate that profit. ROIC is typically expressed as a percentage, and the higher the return, the more lucrative a company is as an investment. Many analysts look at return on invested capital as functionally equivalent to return on capital, although some technicians draw a minor distinction that leads to slightly different results.

How to calculate return on invested capital

Figuring out a company's ROIC requires knowing several figures from its balance sheet. The simple equation for ROIC takes the company's net after-tax operating profit and divides it by its invested capital.

In order to simplify the calculation of ROIC, it's helpful to know some common conventions that accountants use. Net after-tax operating profit technically depends on the company's actual tax rate, but many people simply assume a 35% tax rate and thus take 65% of the company's operating profit as shown on its income statement.

Figuring out invested capital requires looking at several items on the balance sheet. Invested capital is typically defined as total assets minus excess cash beyond the amount of working capital necessary to keep the business running, reduced by current liabilities that don't incur interest, like accounts payable and wage payments incurred. Some accountants include both fixed assets and intangible assets in the calculation of total invested capital, while others focus more on fixed assets.

Different businesses will have varying returns on invested capital. As a result, investors can use ROIC to gauge the relative attractiveness of an industry overall, or they can use it to compare multiple companies within the same industry to find the most attractive candidates for investment.

More importantly, the return on invested capital only tells you half of the story about how well a company is performing. The other half involves knowing how much it costs the company to obtain the capital it uses to invest in its business. If the ROIC is higher than the cost of capital, then the business is healthy. An ROIC that's lower than the cost of capital reflects an unsustainable business model, even if the ROIC is fairly high in absolute terms.

Return on invested capital gives you useful information about how profitable a business is. As part of a broader look at a company, examining ROIC and how it compares to cost of capital can be vital to determining whether a company's stock is worth your investment money.