With nothing more than a passing glance, Signature Bank (SBNY 2.88%) looks to be cut from the same cloth as better-known names like Bank of America (BAC 1.10%) or Wells Fargo (WFC 0.94%). Checking, lending, and investing services are all in its repertoire.

If you visit one of its offices and ask to open an account, however, you'll immediately notice some big differences between it and other names in the business. Signature Bank is built from the ground up to serve privately owned businesses and their owners. Whereas publicly accessible tellers handle most of the customer transactions with most banks, Signature Bank assigns one point-of-contact person to each of its customers, who conducts business in a private office setting. 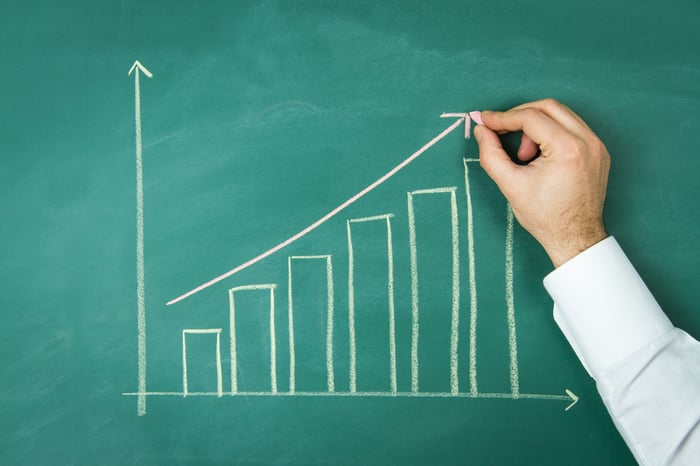 If its revenue and income growth are any indications, the approach has been hugely popular since the company's inception in 2001.

The kicker: Signature Bank even helps its clients handle cryptocurrencies like Bitcoin (BTC 1.59%).

To the layperson, Signature's place within the crypto space isn't entirely clear. That's because it offers more than one crypto-related service.

One of these services is facilitating crypto payments between its customers. Namely, the platform -- called Signet -- handles blockchain-based payments made in stablecoin cryptocurrency, or digital currency specifically designed to hold a stable value rather than dish out the sort of price volatility cryptos like the aforementioned Bitcoin does.

But that's not the extent of Signature Bank's cryptocurrency offerings. The company also caters to the unique needs of cryptocurrency exchanges themselves. CEO Joseph DePaolo commented earlier this year that his bank is the bank for several major crypto exchanges.

Perhaps the most distinguishing crypto-friendly accommodation Signature is willing to make, though, is a willingness to make conventional loans that use Bitcoin as collateral. While the bank itself is pickier about who qualifies for these loans, and DePaolo acknowledges they're issued with above-average interest rates, it's a step forward for cryptocurrencies nonetheless. There was a time not too long ago when no bank would even consider offering such a loan.

In light of the ever-growing acceptance of at least the idea of digital currencies, it comes as no surprise that this bank has done exceedingly well of late by almost any meaningful measure. However, this is not necessarily thanks to its cryptocurrency offerings -- most of its Bitcoin and stablecoin stuff drives little to no revenue (at least not yet). These blockchain-based services are just a means to an end, or more specifically, a means of attracting new customers to a traditional banking business that was already growing well anyway.

Regardless, the strategy is working. Interest income for the quarter ending in September came in at $555.7 million, up 15% versus the year-earlier figure of $481.5 million. That was down a bit from 2019's Q3 interest income of $484 million, although that figure grew firmly from the prior year's comp of $434.2 million.

The same trend applies to full-year results, on the heels of impressive deposit growth from $36.1 billion at the beginning of the three-year span to $95.6 billion by the end of it. The graphic below puts the impact of this growth in revenue and earnings in perspective. 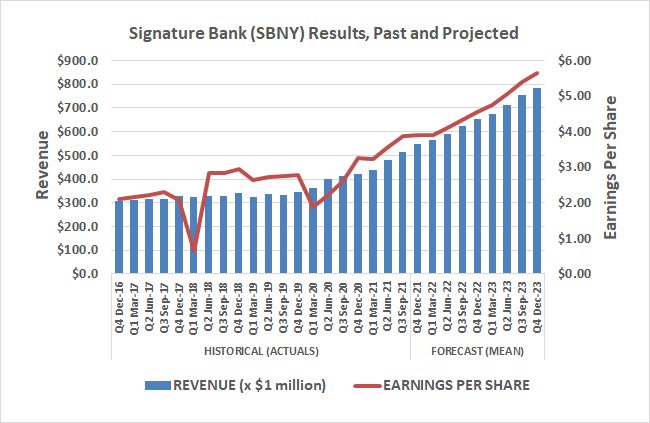 Note that as traditional banking continues to meld with blockchain-based alternatives, analysts are looking for more of the same sort of double-digit percentage growth pace going forward too. Signature Bank is leading that evolution as one of only two entities willing to cross a cryptocurrency line that bigger banks aren't quite ready to cross just yet.

Of course, it doesn't hurt that the company's clients are getting a little bit of the red-carpet treatment that's slowly evaporated from the banking landscape over the course of the past couple of decades.

Not your typical bank stock

It's not for everybody, mind you. Signature Bank is a typical growth stock in more ways than one, including its disinterest in paying the healthy dividends that most other banks typically dish out. The stock's current yield is a (very) modest 0.7%. If you need income, look elsewhere.

On the flip side, that yield isn't uncharacteristically low merely because the stock's valuation is uncharacteristically high. Shares are presently priced at 22.6 times this year's projected profits and only 19.5 times next year's estimated per-share earnings of $16.88. While that's rich by current bank stock standards, most banks aren't on track to report back-to-back years of revenue and earnings growth in excess of 20%. Such growth rates are commensurate with the sort of valuation this stock currently sports.

Whatever the case, while the stock's price is up more than 300% for the past 12 months, there's more upside potential ahead now that the unconventional bank has found an even more unconventional groove in the crypto space.