The bank has now generated record earnings for four straight quarters. Will the streak continue?

It should get easier to deploy excess cash

Signature is one of the few banks that cater to institutional cryptocurrency traders and crypto exchanges. Its Signet real-time payments platform allows customers to complete instant transactions with one another, which is beneficial to crypto traders because cryptocurrencies trade round the clock. The platform helps bring in lots of zero-cost and very cheap deposits that Signet can then deploy into loans and securities.

Signet has been so successful in bringing in deposits, it has been difficult for Signature to keep up with deployment. In Q3, the bank grew non-interest-bearing deposits by $5.7 billion, while total deposits grew roughly $10 billion in the quarter. In terms of deployment, Signature grew total loan balances by about $4 billion and then invested $2.2 billion into securities. 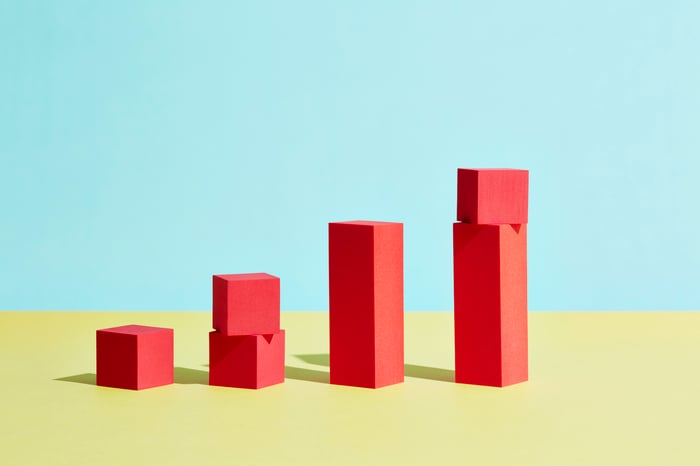 In total, the bank still has roughly $28.6 billion of cash collecting very little yield right now. On the bank's third-quarter earnings call, COO Eric Howell noted that the bank would like to see its cash balances in the $10 billion to $15 billion range. The good news is that with interest rates on longer-term Treasury yields and other securities rising, the bank will likely feel better about deploying more cash into securities. Howell said the bank deployed $1 billion of the $2.2 billion of total cash it deployed in Q3 on the last day of the quarter when rates had climbed significantly. The bank is also ramping up its lending activities, with total loans up nearly 8% in the quarter, driven in large part by Signature's venture and fund banking team. Signature is in the process of rolling out new mortgage warehousing and U.S. Small Business Administration lending teams, which should help drive total loan balances higher.

The other thing that should give a boost to Signature is the recent surge in the price of Bitcoin and other cryptocurrencies. Signet is powered by crypto traders, so the more volatility and trades there are, the more utilization the bank is likely to see on the platform. Howell said utilization on Signet fell from $149 billion in Q2 to $128 billion in Q3, but I suspect volume will jump back higher in the fourth quarter with the price of Bitcoin rising from around $48,000 on Oct. 1 to the $66,000 range on Oct. 20. Signet is really the engine that powers Signature's entire strategy. When there is more volume, that will likely translate into more deposits. And more activity could entice new clients onto Signet and new customers for the bank to cross-sell other products to.

At the very least, Signature Bank should be able to reap more revenue from deploying cash into higher-yielding securities, which hopefully it's already been taking advantage of in October. The rise in the price of Bitcoin should drive more activity and flow on Signet, while the continued ramp-up of the bank's venture banking team and the launch of its SBA and mortgage warehouse lending teams should help the bank better deploy all of its excess deposits. And of course, if the Federal Reserve raises its federal funds rate at some point in 2022, that would also be a huge boon for the bank. With all of these factors at play, I could see the bank generating record earnings for some time.