Please ensure Javascript is enabled for purposes of website accessibility
Log In Help Join The Motley Fool
Free Article Join Over 1 Million Premium Members And Get More In-Depth Stock Guidance and Research
By Rich Smith - Jan 16, 2022 at 7:53AM

Two internet satellites versus 1,800: This isn't even a contest.

Amazon (AMZN 3.66%) announced in November that -- at long last -- it's getting ready to roll out its Project Kuiper initiative to provide broadband internet service via satellite.

And yes, I said Amazon -- not SpaceX. 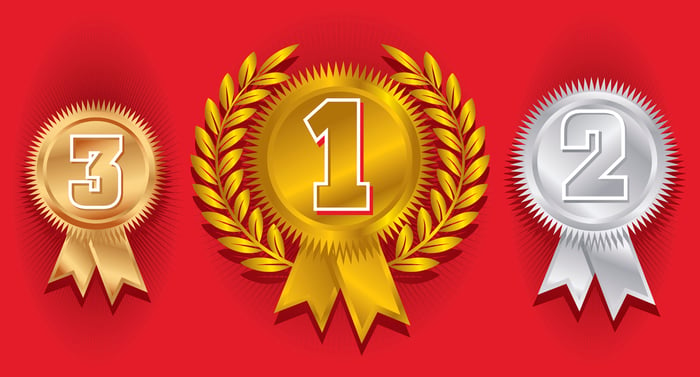 Thanks to the popularity of Starlink, satellite-provided broadband internet has become an idea most closely associated with SpaceX, not Amazon. In the six years since SpaceX announced plans to put a constellation of 12,000 Starlink satellites in orbit, and in the year and a half since it began opening up Starlink for beta service, Starlink has put about 1,800 operational satellites in orbit and expanded its footprint to 25 countries -- and 145,000 customers -- receiving satellite internet service. Starlink has progressed toward its goals so far that SpaceX has already begun talking about IPOing its subsidiary.

In contrast, Amazon currently has zero satellites in orbit and plans to launch just two this year. But just because it's far behind SpaceX in this race doesn't mean Amazon has abandoned its intention to compete.

In its most recent announcement, Amazon says it plans to deploy its first two internet satellites -- KuiperSat-1 and KuiperSat-2 -- in Q4 2022. Although equipped with "parabolic antennas, power and propulsion systems, and custom-designed modems," these first two satellites will not offer any internet service. Rather, Amazon says it will use them just to "test the communications and networking technology that will be used in our final satellite design, and help us validate launch operations and mission management procedures."

That accomplished, both satellites will be deorbited and allowed to burn up in Earth's atmosphere.

A curious route to space

But how does Amazon even propose to get KuiperSat-1 and 2 into orbit in the first place?

Funny you should ask. In addition to the airplanes, trucks, and delivery vans it uses to move packages around the globe, Amazon also shares a founder -- Jeff Bezos -- with the space company Blue Origin, which has proposed building a large, orbital-class rocket called the New Glenn that would seem ideal for putting Amazon's satellites into orbit. And yet Amazon made no mention of New Glenn in its recent announcement. Instead, Amazon says it will use RS1 rockets from start-up rocket-maker ABL Space Systems.

And yet Amazon is choosing not only to fly its satellites to space with ABL instead of Blue Origin but to establish "a long-term relationship together" with ABL. Very interesting.

Can Amazon ever catch up to SpaceX?

Call me a skeptic, but when I consider the lead SpaceX Starlink has over Project Kuiper and how little confidence Amazon seems to be placing in Blue Origin's ability to put its KuiperSats in orbit, I have to wonder if Project Kuiper is really nothing but a pipe dream.

Amazon's choice of ABL's rocket over Blue Origin's New Glenn is my first reason for skepticism. Blue Origin's troubles getting its BE-4 rocket engine (the one that will power New Glenn) ready for operation are well known at this point. And now Amazon's decision to use ABL's rocket rather than wait for one from Blue Origin suggests that BE-4 may be even farther behind schedule than is commonly understood.

If Amazon cannot depend upon Blue Origin's rockets to deploy Project Kuiper, that will create even more significant problems for Amazon. You see, in 2019, Amazon told the Federal Communications Commission that it will cost "more than $10 billion" to build Project Kuiper and orbit its planned 3,236 satellites. Similarly, SpaceX plans to spend "as much as $10 billion" to create Starlink -- and yet, $10 billion will buy SpaceX nearly four times as many satellites -- namely, 12,000.

Why is that? Well, when SpaceX sends Starlink satellites to orbit, they ride atop SpaceX rockets. Thus, one half of SpaceX's business subsidizes the other half. But because Blue Origin can't get its rockets ready for prime time (pun intended), Amazon must hire somebody else to launch its satellites at a presumably higher cost than if it could use New Glenn rockets to launch Project Kuiper.

This all seems to add up to an insurmountable business advantage SpaceX has over its rival -- one that will give Starlink's profit margins an edge over Project Kuiper's (if the latter ever gets operational) and one that may even make Project Kuiper so un-profitable as to doom the entire operation.

Sad to say, it looks like Amazon lost this space race before it even began.

5 Stocks You Can Buy and Hold Forever