Please ensure Javascript is enabled for purposes of website accessibility
Log In Help Join The Motley Fool
Free Article Join Over 1 Million Premium Members And Get More In-Depth Stock Guidance and Research
By Rich Smith - Apr 24, 2021 at 6:53AM

ABL Space aims to compete in the small rocket launch market -- but has never actually launched a rocket.

As one half of the "United Launch Alliance" team, Lockheed Martin (LMT 1.26%) (along with its partner Boeing) forms the backbone of the U.S. government's space program.

True, upstart SpaceX is increasingly growing into a real alternative to the Lockheed-Boeing alliance for many missions. But when the Air Force or NASA absolutely, positively has to get a satellite into orbit successfully, they know that they can still rely on ULA's record of 142 straight successful rocket launches to get them there.

Which is precisely why it's so surprising to learn that, earlier this month, Lockheed Martin announced that it's subcontracting some of its space launch work to an almost entirely unknown rocket company. 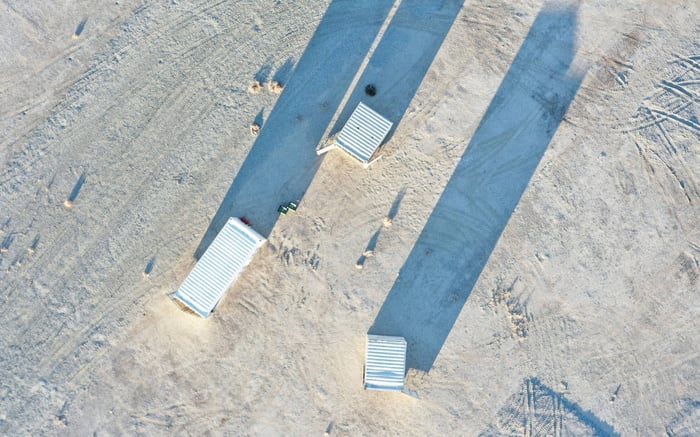 With ABL, this is what a spaceport could look like. Image source: ABL Space Systems.

ABL Space Systems is the name of this new arrival, and "high-cadence, no-fuss ... 100% American Made" rockets are its game.

As the company's website describes, ABL is developing a two-stage RS1 launch vehicle capable of lifting 1,350 kilograms of payload to Low Earth Orbit, and a GS0 deployable launch system to launch it. Essentially a spaceport-in-a-box, GS0 -- like the RS1 it launches -- can be delivered to almost any location with a big enough "concrete pad" to host it, moving on the back of tractor-trailer trucks, then setting up and launching off. To begin with, ABL plans to conduct its launches from established spaceports at Vandenberg Air Force Base and Cape Canaveral (of course), and also from Wallops Island in Virginia, Kodiak spaceport in Alaska, and Camden County, Georgia.

GS0 has not been used in any actual orbital launches yet, however, nor has RS1 ever yet visited space.

But you gotta have faith

Nevertheless, Lockheed announced this month that it has hired ABL to provide it with "up to" 26 RS1 rockets through 2025, and then "up to" an additional 32 launches through 2029. It's a sizable order -- worth up to $700 million at ABL's stated launch cost. Lockheed also dropped a strong hint that it is interested in forging a "strategic partnership" with ABL over the long term. But why is Lockheed throwing its weight behind an unproven design in the first place?

I have to figure that cost is one reason. Although the prices of large rocket launches by ULA have been falling -- in a notable pair of launch contracts awarded to ULA last month, the company charged barely $112 million each -- ABL is advertising its launches for a mere $12 million per mission. That translates to a mere $8,888 per kilogram to Low Earth Orbit, and represents a 36% cost savings on the per-kilogram cost of launching a base model Atlas V rocket at Lockheed-owned ULA.

So in addition to the advantages ABL is advertising in terms of launch flexibility, and in addition to giving Lockheed Martin an entirely new tool in its tool chest -- a rocket tailored to launch smaller payloads -- it also gives the company a new means of competing with SpaceX on price.

In July 2019, ABL announced that Lockheed Martin Ventures had made a "strategic investment" of unstated size in the small rocket company. (ABL itself says Lockheed is one of its 10 biggest backers.) At the time, if you recall, the U.S. Pentagon was pushing a concept dubbed alternately "responsive," "on demand," or "flexible" launch, supporting small rocket launchers who could promise to deliver small payloads to orbit on short notice, and from launch sites set up at short notice. Presumably, Lockheed's investment in ABL was a move to position the company to meet the Pentagon's needs in this regard.

To an extent, therefore, Lockheed's awarding of a big launch contract to ABL can be viewed as a way of preserving its own investment in the company, and preserving its ability to meet future Pentagon responsive launch needs. It's also an investment that could see a quick return in other markets, because in February 2021, Lockheed contracted ABL to run Lockheed's "first U.K. vertical satellite launch" in 2022, a mission dubbed "U.K. Pathfinder."

And now we know that launch will be the first of many.