Please ensure Javascript is enabled for purposes of website accessibility
Log In Help Join The Motley Fool
Free Article Join Over 1 Million Premium Members And Get More In-Depth Stock Guidance and Research
By Rich Smith - Feb 9, 2021 at 7:55AM

First America, then Canada. Now, SpaceX satellite internet service is in Britain, too.

SpaceX Starlink satellite internet is taking over the world -- literally -- and that's great news for investors hoping for an eventual Starlink IPO.

SpaceX announced Starlink "beta" service to the northern United States for $99 a month in October (and for 642,925 lucky souls, the U.S. government will help pick up the tab). In November, SpaceX began signing up customers in Canada. By the end of this year, SpaceX says that Starlink will reach "near global coverage of the populated world."

And to that end, with more than 1,000 operational satellites in orbit today, Starlink has just announced the latest country to receive service: The United Kingdom. 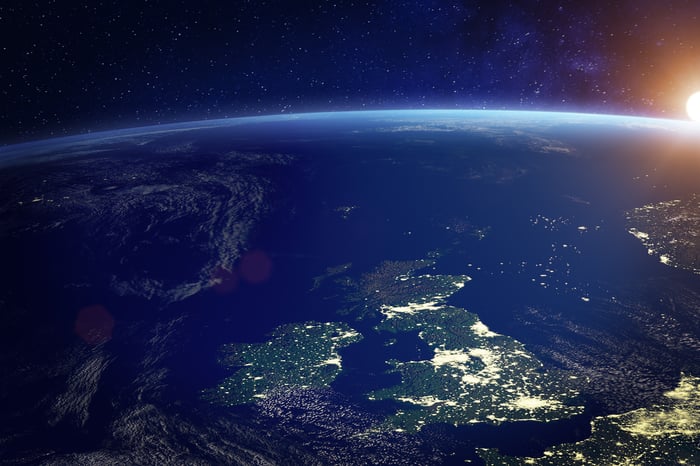 "London calling to the faraway towns" ... from space!

Last month, U.K. telecom regulator Ofcom confirmed that it has issued an "earth station network license" to SpaceX to begin offering Starlink satellite broadband internet service in the United Kingdom. Less than a week later, SpaceX confirmed that it has begun marketing the service to British customers.

Prices are similar to what SpaceX is charging in the U.S. and Canada, with one important quirk. Whereas in North America, the company charges about $499 for the "Starlink Kit" hardware (a receiving dish, modem, and router) needed to start service, and $99 per month for the service, in the U.K., Starlink service is reported to cost GBP 89 ($122) per month, with an upfront GBP 439 ($621).

That's about 23% more than SpaceX charges in the U.S. or Canada, a fact explained by the U.K. charging value-added tax on the service. (Of course, Starlink is subject to sales tax in most U.S. states -- we just don't include that in the product cost).

In exchange for the upfront cost and monthly service fee, U.K. customers can expect Starlink internet download speeds similar to what North American customers receive -- anywhere from about 50 Mb/s to 150 Mb/s on average initially (but with a long-term goal to increase the top speed to one gigabit per second -- 1,000 Mb/s).

Also as in North America, Starlink service will initially target "rural and remote areas where there is no easy access to fiber or cable," said SpaceX lead manufacturing engineer for Starlink Jessie Anderson -- and it's not hard to figure out why.

According to Speedtest.net data, the average fixed broadband (cable and fiber) speed in the U.K. is 81 Mb/s, but reports from Uswitch.com show that actual speeds vary widely -- from in excess of 600 Mb/s in Warrington in the west, to as slow as under one Mb/s in Lincolnshire in the east. Even with fixed-line broadband internet costing on average less than $50 per month, it's likely that consumers put-putting along at single-digit Mb/s speeds will jump at the chance to pay just twice as much to boost their speeds multiple times with Starlink.

And Starlink could have even broader popularity in the U.K. -- as opposed to a country like the U.S. or Canada. Consider that the average internet speed in the U.K. is just 81 Mb/s, while Starlink is offering speeds that average around 100 Mb/s (and more, as its satellite fleet grows). Per megabit, wired internet is probably still a bit cheaper than Starlink -- certainly cheaper than in the U.S. or Canada, where internet speeds average 156 Mb/s and 174 Mb/s, respectively. But for U.K. towns where the broadband is a bit slower than average, or a bit pricier, Starlink could give established ISPs a run for their money.

And beyond the U.K.? Where will SpaceX, and Starlink, look next to expand en route to Elon Musk's promised $30 billion in satellite internet revenue by 2025?

As already mentioned, Starlink is advertising "near global coverage of the populated world in 2021." Furthermore, late last year, Musk elaborated that European Union countries should start receiving Starlink service sometime in February or March 2021. In that regard, Greece and Germany are both believed to have approved use of Starlink within their borders already.

Further down the road, Australia is also reported to have approved Starlink. And SpaceX has registered Starlink to do business in Austria, Argentina, Brazil, France, Chile, Colombia, Ireland, Italy, Mexico, the Netherlands, New Zealand, the Philippines, South Africa, and Spain as well. The company has apparently not registered with India (the world's second most populous country) just yet, but in November, Musk predicted that Starlink will expand to India by mid-2021 -- so it's probably at least on the to-do list.

Starlink is expanding, and its momentum is building. The big question now is: When will Musk capitalize on the momentum and announce his Starlink IPO?

Is Lucid's Saudi Connection Good for Its Stock?