Welcome to 2016! With another year underway, now's a good time to look back at 2015 and see how -- at least on average -- Americans are doing. Here's a closer look at how the average (and median for some stats) American individual and household stack up in a handful of important categories, including debt, income, housing, age, and wealth.

And while it's fun to know how you compare to the average, it's less important to try and keep up with the Joneses than it is to make sure you're on the right track.

According to the U.S. Census Bureau, there are around 322.5 million Americans, with a median (meaning half of the population is older, while the other half is younger) age of 37 years, five months. The median male is 36, while the median female is just under 39.

Five years ago, the median American was 36 years, six months of age, nearly one full year younger. This trend is expected to continue, with many Generation Xers and millennials having fewer kids, and waiting later to do so.

The average American and work
There's no denying that the nation's unemployment trend has been one of steady improvement over the past six years: 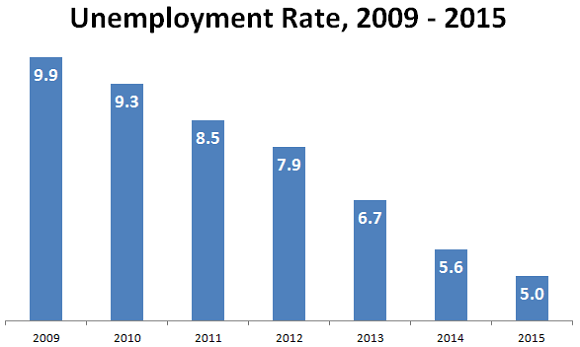 And while it's definitely good that the unemployment rate has fallen, there is additional context that must be considered: labor force participation. Since just before the recession, the percentage of potential workers actually participating in the labor force has been on the decline: 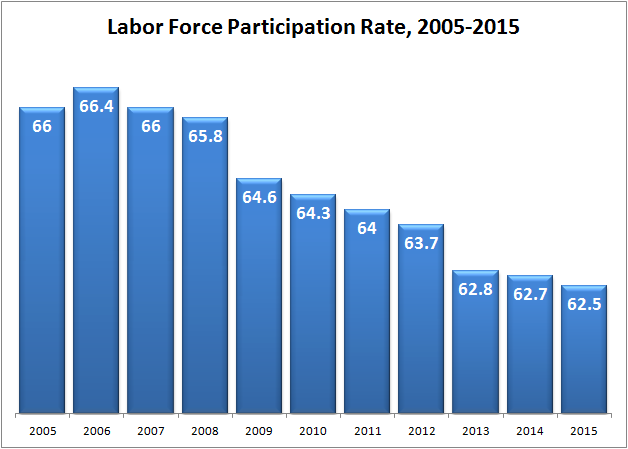 This has been driven by a confluence of events: The so-called "jobless recovery" just after the recession when the unemployment rate was slow to come down and many job seekers simply gave up and stopped looking for work and baby boomers reaching retirement age.

The average American and income
Median incomes have remained stagnant for years. Here's a look at the most current information available from the U.S. Census Bureau:

The table above reflects 2014, and was just released in Sept. 2015, so it will be months before we have detailed information on 2015. However, what we know so far indicates that the news could be good -- or at least better than the average American has gotten over the past handful of years.

The Bureau of Labor Statistics' monthly real earnings report shows that average hourly earnings increased in nine of the past 12 months reported, while inflation has remained relatively flat over the same period. In all, real average weekly earnings increased 1.7% over the 12 month period of Dec. 2014-Nov. 2015. It will be a few months before all the data has been assembled for 2015, but the average person and household may have made real gains in 2015.

The average American and debt
According to the Federal Reserve, Americans owe more than $3.5 trillion in consumer credit debt. The average credit card debt per U.S. household, according to a recent NerdWallet survey, is $5,747. When you exclude those who owe zero credit card debt, the average household that carries debt owes $15,355.

The Fed also reports that there is more than $13.7 trillion in outstanding mortgage debt held by U.S. institutions. On average, that works out to about $42,480 per American, but that includes every man, woman, and child. Divided by the total number of households -- around 125 million at year-end -- you get about $110,000 per household in mortgage debt.

The average American and retirement
The majority of Americans will count on Social Security for a relatively large portion of their retirement income. For those already in retirement, the Social Security Administration reports that 85% of those at or above retirement age receive a benefit, paying an average of $1,329 per month. New awards, meaning those just starting to receive benefits, are receiving $1,363 per month on average, according to the "Fast Facts & Figures 2015" report.

When it comes to retirement savings -- which the data above should make clear most Americans will need -- here's what fellow Fool Brian Stoffel reported in late 2015:

Average Retirement Savings by Age Create your own infographics

The chart above shows some averages, but it misses a more important number: What should the average person have? Brian addressed that with this follow-up chart:

Retirement Savings Reality vs. Ideal Create your own infographics

In other words, being at or near -- or even slightly above -- the average American in retirement savings would still leave you way behind where you should be.

Looking ahead
Frankly, these numbers may or may not mean anything to you. But what does matter is that you're on the right financial track to reach your short- and long-term goals. Way behind on paying off that debt or contributing to your retirement account? Take this as a wakeup call and put a plan together to get back on track.