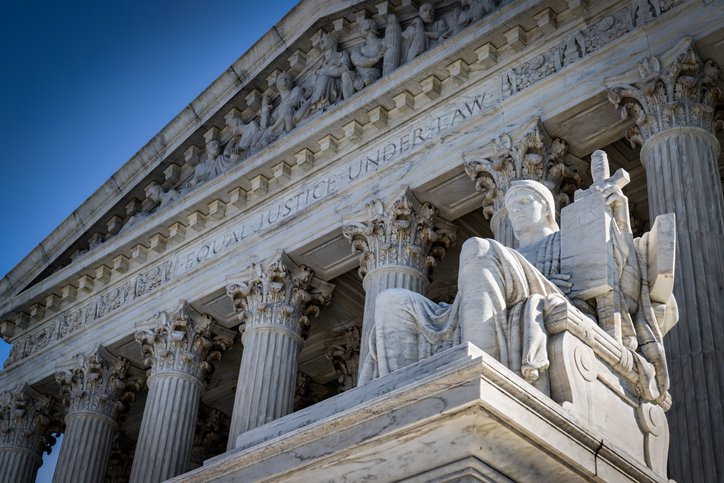 The death of an icon has all but eliminated the possibility of a second stimulus check.

Struggling Americans throughout the country have had their eyes on Washington, D.C. for months, waiting for lawmakers to finally provide financial help in the form of a fifth coronavirus relief bill.

Back when stimulus checks and unemployement aid were included in both the HEROES Act -- passed by the Democrat-controlled House -- and the HEALS Act -- proposed by the Republican-controlled Senate, there had been reasons to hope. Sadly that optimism has now waned as lawmakers have repeatedly failed to compromise.

Now, the death of Supreme Court Justice Ruth Bader Ginsburg means the chances of a deal are slimmer than ever. It doesn't look likely that lawmakers will come together to pass any type of coronavirus legislation before the November election.

Lawmakers have been divided for months on coronavirus relief. Republicans want to keep the price tag of any bill at around $1 trillion and Democrats hope to pass broader relief at a cost of more than $3 trillion. Multiple points of conflict, including how much relief to provide the unemployed, what aid to provide to states, and whether to bolster the struggling post office, have stalled any relief legislation progress.

And now, an even more bitter dispute in D.C. is almost assuredly going to take center stage, ending any ongoing discussions about coronavirus legislation. It concerns a lifetime appointment to the country's highest court, and the stakes are enormous.

Justice Ruth Bader Ginsburg, who passed at the age of 87 on Friday, had achieved revered status as a liberal icon. Her death opens up a vacancy on the Supreme Court, and Democrats are distraught at the idea that President Donald Trump could fill it. If he does, he'd put his stamp on the court by naming a third justice during his four-year term. In fact, Ginsburg herself reportedly dictated a death bed wish to her granddaughter that her seat not be filled until the next President was installed.

Democratic objections to President Trump naming a replacement for Ginsburg are bolstered by a similar situation in the last election. Senate Majority Leader Mitch McConnell blocked a vote on President Barack Obama's pick for the Supreme Court when Justice Antonin Scalia, a conservative icon, died eight months prior to the presidential election. Back then, Senator McConnell indicated that the vacancy created by Scalia's death should be filled by the person elected president in the upcoming November election.

Leaders on the left have now echoed McConnell's words, arguing the same standard should apply. There are fewer than 50 days left until the country determines who will hold the country's highest office for the next four years. However, Senator McConnell and the President have made clear their intention to move forward with a replacement nominee quickly. The President's choice to fill Ginsburg's seat is expected to receive a quick vote. McConnell has drawn a distinction between this vacancy and 2016, arguing the Presidency and Senate, which has the Constitutional authority to give advice and consent on judges, are now held by the same party.

When Mr. Trump last nominated Brett Kavanaugh to the Supreme Court in July of 2018, Washington erupted in partisan rancor. The controversy in D.C. is likely to be far worse this time. The reason for this is twofold: First, the perceived hypocrisy of replacing a justice so close to the election. And second, the President's new justice nominee would shift the court even further towards the right than his replacement of Justice Anthony Kennedy with Justice Kavanaugh did.

The fight over whether to move forward with confirmation is almost assuredly the final nail in the coffin on any attempts at bipartisanship in passing a second stimulus bill. And even if that were not the case, Senator McConnell has repeatedly stated that confirming judges is a major priority. The right has had a longstanding goal to secure a conservative majority on the country's highest court. Because of that, the focus in the limited remaining days before the election will be on moving President Trump's nominee forward.

Sadly, if you were hoping for a second stimulus check, or expanded unemployment benefits to help you make ends meet, you're likely out of luck. It is time to explore other options if you haven't already.

Refinancing your home, for example, could potentially reduce your monthly payments to provide more flexibility in your budget, as today's mortgage rates are at record lows. If you need help paying for purchases, a 0% APR credit card might allow you to buy the necessities without owing interest during the promotional period. This may buy you the time to get back on your feet. There are also other sources of state and federal aid available, which may be worth looking into since Washington D.C. is so unlikely to take action.