Keith Noonan and Sean O'Reilly
(None)

To help with this effort, we asked three of our Motley Fool investors which high-yield dividend stocks they think might be attractive to particularly aggressive investors. They suggested AstraZeneca (NYSE:AZN), Vodafone (NASDAQ:VOD), and Crescent Point Energy (TSX:CPG). Read on to find out why. 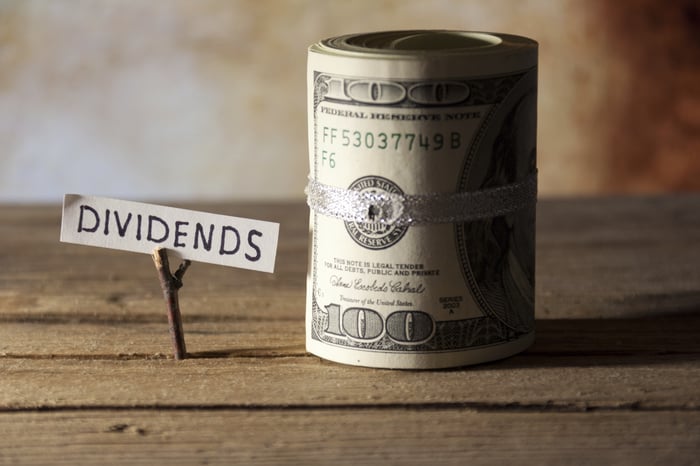 George Budwell (AstraZeneca): AstraZeneca's cancer immunotherapy Imfinzi was supposed to haul in cumulative sales in excess of $41 billion over the next five years and transform the drugmaker into a top growth stock in the process. After the drug's miss in a late-stage trial known as Mystic for its most valuable indication -- advanced lung cancer, Astra is now looking for alternative ways to overcome the loss of exclusivity for a slew of star products over the past few years.

Unfortunately, Astra doesn't have either a great cash position or free cash flows at the moment -- meaning that a dramatic shift in capital allocation may be coming soon. And that could spell trouble for the company's enormous annualized dividend yield that presently tops 8.5%, and is easily among the highest within its peer group.

Astra's saving grace -- and the fate of its dividend, though, could be its unusually broad clinical pipeline that sports multiple late-stage product candidates across a number of high-value markets like oncology and cardiovascular care. In fact, Astra's pipeline still has the chance of producing several blockbuster products in the coming years, whereby fulfilling management's promise of ushering in a new era of sustainable double-digit growth for the drugmaker.

That said, clinical trials rarely go according to plan -- a fact that is underscored by Imfinzi's whiff in lung cancer. As a result, this high-yield pharma stock probably isn't well-suited for risk-averse investors, or those on the hunt for reliable income-generating opportunities.

Keith Noonan (Vodafone): If you're looking for high-yield stocks in the telecom sector, AT&T and Verizon are obvious standouts, but, for those desiring international exposure, Vodafone also deserves consideration. The European company could be a worthwhile investment vehicle so long as you approach it with the understanding that its profile differs from America's two wireless giants in some key ways.

As the chart below shows, the company's payout history is somewhat erratic. 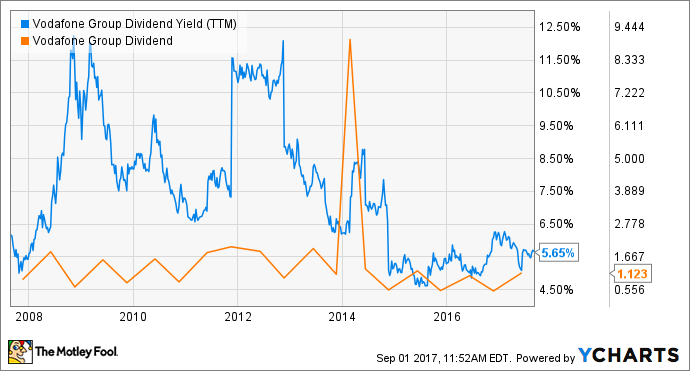 However, the company has distributed a dividend uninterrupted since 1989, and the stock has historically delivered a large yield despite its irregular payout growth.

Vodafone is a telecom that's emerging from a turnaround period -- a dynamic that points to a heightened risk-reward dynamic compared to Verizon and AT&T. The company expects sales to start climbing again after declines in recent years, and cash flow is increasing the completion of a big push to upgrade its wireless networks. Other cost cutting measures should also create earnings momentum and the company's ability to increase its payout, and the carrier looks to have some opportunities that could help grow its dividend.

After its recent merger with Idea Cellular, Vodafone is now the largest wireless provider in India -- the world's fastest growing smartphone market. That doesn't mean that capital appreciation is necessarily a safe bet, as the company still faces a challenging competitive environment in India and has been seeing soft performance in the U.K. and other key markets, but there are some promising growth avenues ahead.

Trading at roughly 28 times forward earnings, Vodafone doesn't fit the low-risk profile of an AT&T or a Verizon, but it could be worth it for the more aggressive investor who wants a different kind of high-yield play in the telecom space.

Sean O'Reilly (Crescent Point Energy): For aggressive investors that are unafraid of a little risk, I highly recommend giving Crescent Point Energy strong consideration. Down some 80% from its full year 2014 highs, the Calgary, Alberta-based oil and gas exploration and development company is beginning to go on the offense. Production in FY 2016 averaged over 167,000 barrels of oil equivalent per day, not bad for a company whose operations span from Saskatchewan to the Williston and Uinta Basins. Despite its poor stock price performance these past three years, the company sports some 538 million barrels of oil equivalent reserves, 90% of it crude oil and natural gas.

Taking in the current industrywide downturn, Crescent has put up some impressive operating results as of late. It has exceeded Wall Street expectations for the first half of 2017. Daily production is up some 5% year-over-year for the 6-month period ended June 30, 2017. Looking toward the future, the company has over a decade of reserves to develop -- and intends to focus on these assets. It spent approximately $6 billion acquiring assets from the four year period 2012-2016. Obviously, the downturn could not have come at a worse time, but now that the company has found its footing, it is now 'harvest time' for Crescent Point Energy. With shares at historic lows, and its stock trading at half of its tangible book value, Crescent Point is a fantastic pick for investors willing to step up to the plate.