So far this year, defense stocks -- as measured by the SPDR S&P Aerospace and Defense ETF -- have handily outperformed the broader market, rising more than 22%, compared with the overall S&P 500's 13.2% gain. But even defense stocks weren't immune to the recent market sell-off, fueled by concerns over the intensifying trade war with China.

In light of all this, we asked three of our Motley Fool contributors what defense stocks they think investors should keep an eye on this month, and they came back with Oshkosh (NYSE:OSK), Kratos Defense and Security Solutions (NASDAQ:KTOS), and Lockheed Martin (NYSE:LMT). Here's why they think these are worth keeping on your radar screen. 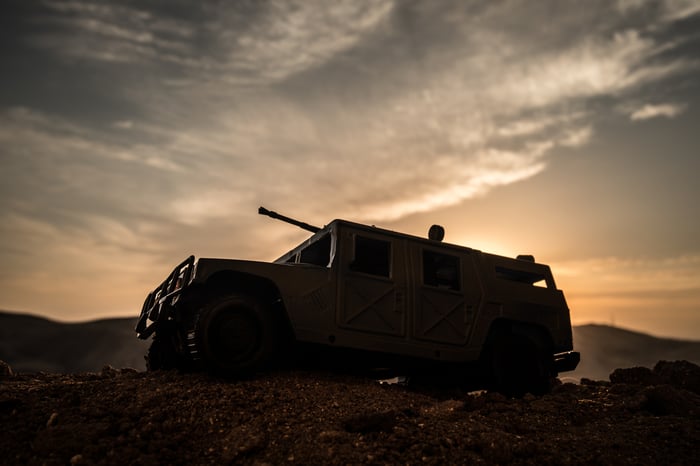 John Bromels (Oshkosh): Specialty truck manufacturer Oshkosh has a couple of high-profile contracts with the U.S. Department of Defense. The first is to provide mine-resistant all-terrain vehicles (M-ATVs), and the second is for joint light tactical vehicles (JLTVs), which are replacements for the Humvee.

In March, Oshkosh had something of a letdown from the Department of Defense: The Pentagon announced that it was "only" requesting $1.6 billion in fiscal 2020 to purchase 4,090 JLTVs from Oshkosh. That's an unexpected 17% decrease from fiscal 2019's $1.9 billion. The expectation had been that the number would stay roughly flat.

The good news for Oshkosh is that it's still making hay while the sun shines. In the second quarter of its fiscal 2019, which ran from January through March, Oshkosh's defense segment revenues was up 13.7% year over year to $486.7 million, primarily because of a continuing ramp-up of JLTV sales to the U.S. government.

The other good news is that Oshkosh's defense segment, while important to the company's bottom line, isn't its only source of income. Oshkosh manufactures all kinds of specialty trucks, including aerial work platforms, fire trucks, garbage trucks, and cement mixers. This diverse portfolio has helped Oshkosh become a consistent outperformer. That's why I'd keep it on your radar screen.

This military drones-maker is finally taking off

Last week, Kratos reported its first-quarter 2019 earnings, and by the time the week was over, Kratos stock was up 20%. Not only did Kratos crush earnings estimates, but the military drone-maker also showed 12% quarterly sales growth, after reporting less than 3% sales growth for all of 2018; reported its third-in-a-row positive quarterly GAAP profit, at $3.1 million; and generated $12 million in positive free cash flow to boot -- more cash profit than Kratos has thrown off in a single quarter since way back in December 2014 !

Barring some unforeseen setback, Kratos is now well on its way to reporting positive trailing-12-month free cash flow for the first time since 2013. And indeed, with CEO Eric DeMarco commenting that "every Kratos business unit exceeded its financial forecast in the first quarter," Kratos now looks like it could be cruising toward its first FCF-positive fiscal year in a very long while -- as much as $20 million, if its guidance  pans out as promised.

Granted, at a valuation of 100 times predicted FCF, I can't call Kratos a "cheap" stock, exactly. But it's certainly getting a whole lot more fun to watch -- and own.

Tyler Crowe (Lockheed Martin): As large and as lucrative as Lockheed Martin's F-35 stealth fighter program may be, one thing is clear: The Pentagon wants to see its costs go down, both on the sticker price for a new one and the lifetime operating costs. The need to cut costs lest it lose some business to some more affordable fighters was highlighted by Lockheed's most recent offer to the Pentagon that was 11% lower than the previous buying round in September.

The F-35 program is a monster contract for Lockheed and represents a huge portion of its revenue and backlog every quarter. It has a commanding lead in other weapons programs, such as hypersonics, which could be another major profit center own the road, but for the foreseeable future, its earnings will ebb and flow with the margins of the F-35.

It's a bridge too far to say that this most recent round of price cuts will destroy Lockheed's profitability, but lucrative programs like the F-35 are a large part of the reason Lockheed's stock trades at a premium valuation to most prime defense contractors. If margins and sales skip a beat as it adjusts to a lower F-35 price tag, Lockheed's stock may not command the premium it does today.

The question investors will want to know is whether Lockheed can maintain margins while offering new F-35s at lower prices as well as drastically cutting its lifetime operating costs. Ramping up production -- it delivered 26 aircraft in the most recent quarter, up from 14 year over year -- should generate efficiencies of scale. Also, sales of F-35 to customers outside the U.S. could still come with much higher sticker prices.