The Humvee replacement is a victim of shifting Army priorities.

A new military truck manufactured by Oshkosh ( OSK -1.85% ) is among the notable losers in the Pentagon's fiscal 2020 budget request as the Army rethinks its priorities and questions how many of the Humvee replacements it will need over the next half century.

The Pentagon is requesting $1.6 billion to buy 4,090 Oshkosh-made Joint Light Tactical Vehicles (JLTVs) for the Army and Marine Corps as part of a broader request for $14.6 billion in ground systems. The JLTV request is down from the $1.928 billion allocated for 5,900 vehicles in fiscal 2019 and below the $1.9 billion the military was expected to spend on the vehicles in fiscal 2020.

The Army had originally planned to spend at least $28 billion over the next 20 years to acquire more than 49,000 JLTVs, replacing about half of the service's Humvee fleet. Although the spending was to be spread out over decades, it is still significant for Oshkosh, which currently generates about $8 billion annually in revenue.

Check out the latest earnings call transcript for Oshkosh.

Army officials admit that the reallocation of funding is likely not a one-time move. The Pentagon is in the process of shifting its attention away from fighting insurgencies in the Middle East and toward investment to prepare for a potential major power conflict with Russia or China. The Army is at the heart of the shift, with the service cancelling or scaling back nearly 100 programs over the next five years in order to free up $30 billion for higher-priority buys. 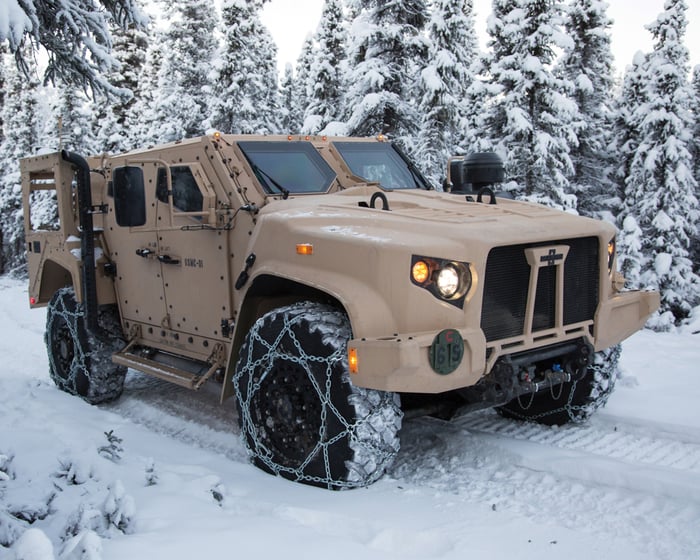 The JLTV was designed specifically to address the shortcomings last-generation Humvees were found to have while operating in the desert, including the legacy vehicle's vulnerability to improvised explosive devices, but they are not central to a major-power war. Army Under Secretary Ryan McCarthy, during a press briefing on the budget request, noted that the Army currently has more than 100,000 vehicles in its fleet, saying there are limits on how many more are needed.

"We're trying to hone in on the exact number of requirements of vehicles," McCarthy said. "That's why the buy will be truncated over time."

The budget request comes less than a month after the JLTV was the subject of a Pentagon report that deemed it "not operationally suitable" due to a range of issues including "reliability, maintainability, training, manuals, crew situational awareness, and safety."

The Pentagon's Director of Operational Test and Evaluation warned that the vehicle will likely require more maintenance than the Humvee, with a greater reliance on contractors to perform that maintenance due to its "poor manuals, and the challenges with troubleshooting the vehicle."

The vehicle is also at a greater risk of being detected on the battlefield because of its larger size and greater noise signature, the report found.

Many of the criticisms found in the report are teething errors common with sophisticated new platforms, and the Army has said the issues that were identified have already been addressed or are being addressed. Others, like the size and noise signature, are trade-offs needed to improve the vehicle's survivability compared to the Humvee. Oshkosh has said it does not expect the report to cause a delay in fielding the vehicle.

The funding pullback almost certainly has nothing to do with the criticism, but the report does make clear the limits to the JLTV's effectiveness. In a time of competing budget priorities, those details can make a difference.

Not a fatal hit

Oshkosh's August 2015 victory over Lockheed Martin ( LMT -1.47% ) and a General Dynamics ( GD 0.25% )/AM General pairing to produce the JLTV was a big win in part due to the sheer volume of orders expected for the versatile vehicle. Defense is expected to account for about one-quarter of Oshkosh's fiscal 2019 revenue. And although defense margins, at 9.75%, trail the company's access equipment and emergency vehicle segments, profitability is expected to improve as the JLTV moves into full-rate production.

The good news for Oshkosh is that the Pentagon is definitely going to buy a lot of JLTVs over the next two decades. The decision on exactly how many the Army and Marine Corps need is likely to fluctuate over time, but this program is not in danger of being eliminated. 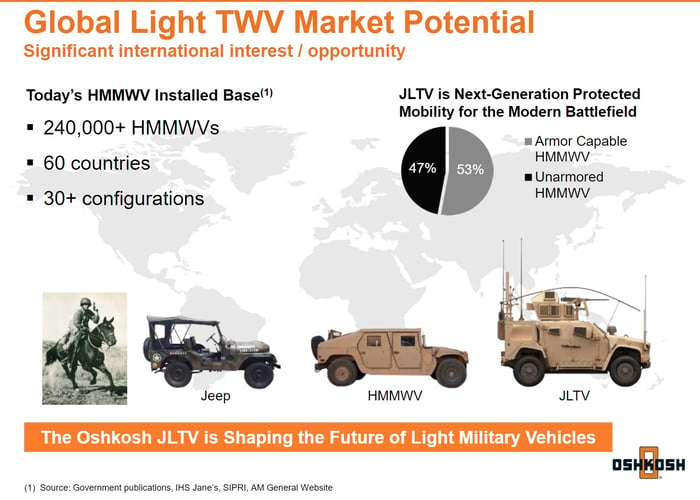 It's also worth noting that the Pentagon budget document is merely a proposal, and the actual allocation decisions will be made by Congress. The proposal is important because it reflects the current thinking of military leaders, but lawmakers historically have been very generous in allocating funds for ground vehicles beyond what is requested, and there is no reason to believe the JLTV will be any different.

It seems likely the final budget will include some sort of a compromise, with the Army not scaling back the total number of vehicles it intends to buy but perhaps spreading out the purchase over more years to free up cash for other priorities. Oshkosh also hopefully will be able to offset any U.S. cutbacks with foreign sales, with a potential addressable market of 240,000 Humvees currently in service in 60 countries.

Shares of Oshkosh have underperformed the S&P 500 by about 500 basis points over the past year, largely on fears of a global economic slowdown that could eat into demand for its commercial and construction vehicles. The company's shares today trade at about 10.7 times earnings, less than half of its multiple in January 2018. 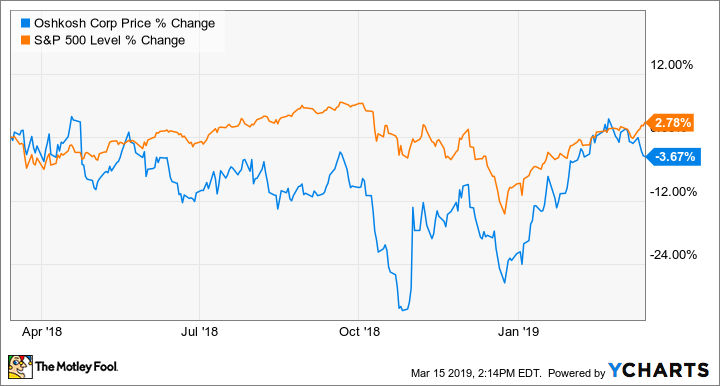 The company trades at a discount to pure-play defense contractors like Lockheed Martin (16.7 times earnings) and General Dynamics (15.2 times), which seems appropriate given its ties to the construction cycle. But its defense business provides revenue diversity and should help it weather an economic slowdown.

The JLTV cutback is disappointing, but it is not a fatal blow. Oshkosh shares remain an attractive option for a long-term investor looking for exposure to a diversified industrial.