Like the S&P 500, many of the best defense stocks had an impressive run in 2017, only to retreat in 2018. 2019 is also shaping up to be a good one for many top defense stocks... so far. There's no telling, of course, what the rest of the year might hold, but that isn't stopping us from trying to pick the best bets in defense.

We asked three of our Motley Fool contributors what defense stocks they're keeping an eye on this month. They came back with Harris (NYSE:LHX), Kratos Defense and Security Solutions (NASDAQ:KTOS), and Huntington Ingalls Industries (NYSE:HII). Here's why they think you should keep these stocks on your radar screen right now. 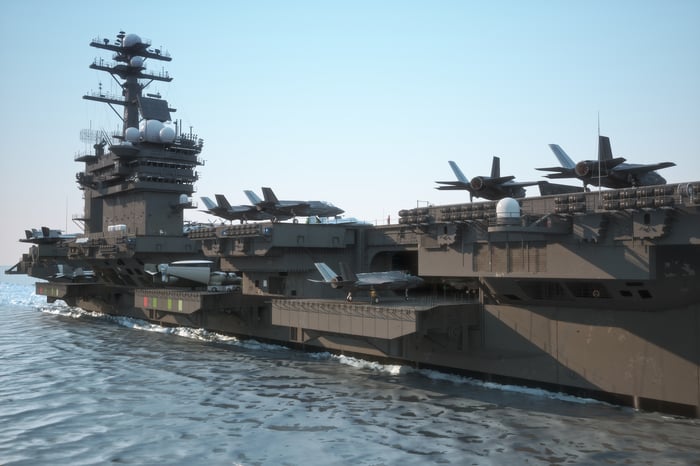 A little company that's about to get huge

John Bromels (Harris): The defense industry is full of big names you've probably heard of like Lockheed Martin and Boeing. But it's full of smaller companies, too, like Harris. Harris doesn't make big pieces of machinery like destroyers or jets. Instead, it provides tactical communications equipment and other electronic systems that are essential to keeping a military running. Harris' products include radars, aircraft antennae, Stingray cellphone trackers, and night-vision goggles, as well as supporting software.

These are high-growth areas, and Harris' share price has more than doubled over the last three years. It also pays a dividend that currently yields about 1.6%. But the reason it's about to get bigger isn't because of organic growth -- it's a merger.

Later this year, Harris plans to merge with L3 Technologies (NYSE:LLL), another defense contractor that operates in similar areas like scanners, unmanned vessels, and night-vision goggles. (In fact, Harris may have to sell its night-vision business to get the merger approved.) This move should result in operational synergies, but another big benefit is that the new L3 Harris Technologies will be a much bigger company that can offer more end-to-end solutions to its customers and pursue new opportunities on a larger scale.

However, the merger isn't slated to happen for a few months, which is why I'm only recommending putting Harris on your watch list for now. But the big changes coming to the company make it a top stock to watch in March.

Check out the latest earnings call transcripts for Kratos Defense and Security Solutions, Huntington Ingalls Industries, and other companies we cover.

Can Kratos complete its turnaround?

You may recall that last month I suggested investors keep an eye out for Kratos to report earnings at the end of February. Well, it did report, on Feb. 28, and the news was pretty big: Despite revenue declining slightly year over year, Kratos reported its second profitable quarter in a row, earning $0.04 per diluted share and exceeding Wall Street's earnings estimate. Kratos furthermore promised that this year, it will grow sales 20% and generate positive free cash flow of at least $10 million -- the company's first full year of positive cash profits since 2013.

Helping with this goal, Kratos ran down a list of 10 big "tactical drone" projects it is working on for various militaries in the U.S. and abroad, and predicted that at least one of its drones, the XQ-58A VALKYRIE, will begin test flights this very month, setting the stage to begin taking in orders to sell the drone later this year.

If the test flights come off as planned and are deemed successful, March could be a month of continued momentum for Kratos.

Will Huntington Ingalls' growth avenue get altered by the Pentagon?

Tyler Crowe (Huntington Ingalls): The case to invest in Huntington Ingalls was pretty simple once the Trump administration started. The Navy was about to get a lot bigger, and Huntington's Newport News shipyard was one of the few places to supply those new ships. Based on some of the Pentagon's plans, though, the company's growth backlog may not be as lucrative as initially thought.

Building new ships is always going to be good business, but it's even better business maintaining and upgrading existing ships. That's why the potential Pentagon decision to not upgrade and refuel the aircraft carrier USS Harry Truman is a big enough deal to get investor attention. The initial plan to refuel, maintain, and upgrade the ship in 2024 should have been a layup for the company. The Truman's initial build life was supposed to be 50 years, but the decision to forgo this maintenance period could remove a potential $6.5 billion revenue job from the company's future plans.

There is likely going to be a long debate on the Hill about the fiscal 2020 budget and beyond over the next few months, especially after the Trump administration's initial proposal for a 5% increase in defense spending. Some of that could go to the Truman's replacement, the two-carrier deal Huntington has proposed to the Pentagon to save on costs. So instead of a win-win with the two-carrier deal and the scheduled maintenance of the existing fleet, the company may end up with just one or the other.