Watch out for these potential dividend traps!

After a wave of oil and gas dividend cuts in March, the market may have thought the worst was over. But then the coronavirus pandemic prompted companies in diverse sectors, including auto manufacturing, retail, and movie theaters, to cut or suspend their dividends.

But there's no guarantee that the cuts are all behind us. We asked five Motley Fool contributors which companies they think are most at risk for a dividend cut right now. They came back with companies from across the market spectrum: energy, real estate, mining, and consumer goods. 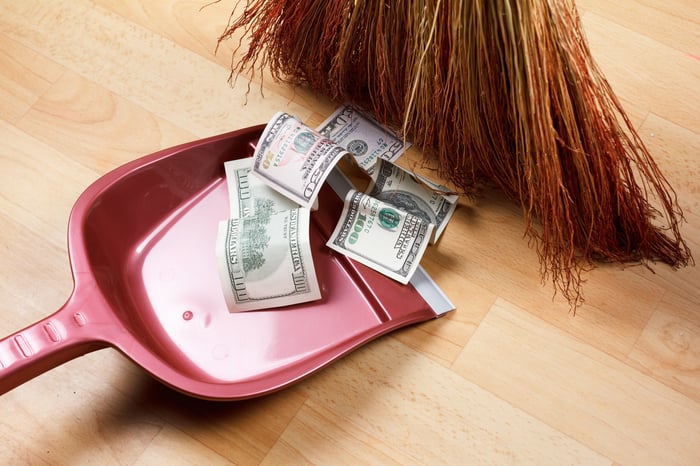 Not even REITs are safe

Travis Hoium (Simon Property Group): 2020 is not a great year to be in the mall ownership business. Retail shops and restaurants are going out of business at a dizzying rate, and that's on top of the months-long closure some places have had to deal with. As a real estate investment trust (REIT) that pays out earnings to shareholders, Simon Property Group may not have much earnings left in 2020, and dividends will probably be slashed and may dry up altogether.

We have limited data so far from Simon Property Group on the impact COVID-19 has had on its business. Net income for the first quarter of the year was $437.6 million, down from $548.5 million a year ago, but still a large profit. But February and March aren't when the impact was going to be felt.

Some companies have gone out of business or stopped paying rent, but there have been temporary fixes that may be masking the true impact on malls for the long term. Federal assistance was offered to some companies, and some of that could be used to pay rent. And there was hope that a V-shaped recovery would form when malls and other locations opened. I'm not confident that's going to happen, and I think we're in for many months of weak consumer spending.

Troubles with its top customer

The driving factor behind Oasis Midstream's sustainability concerns is its outsized reliance on one customer: Oasis Petroleum (OAS). Crashing crude prices earlier this year hit Oasis hard. Prices plunged to such depths that Oasis had to curtail about 25% of its production in April to preserve value. The company also slashed capital spending, which will affect its ability to replace the output declines of legacy wells in future quarters. The declining volumes will impact Oasis Midstream's cash flows since it gets paid fees for gathering and processing Oasis's production.

Of even greater concern is Oasis Petroleum's dwindling liquidity. The company's banks slashed the borrowing base on its credit facility from $1.3 billion to $600 million in response to lower oil prices. The company had $522 million drawn on that facility as of the end of April, leaving it with precious little liquidity. There's a heightened risk that Oasis Petroleum might file for bankruptcy protection in the coming months, which could affect the cash flow Oasis Midstream collects on its contracts.

Given those headwinds, Oasis Midstream warned on its first-quarter conference call that it would "continue to evaluate the distribution on an ongoing basis to make an appropriate decision based on each quarter's financial performance and our assessment of the future outlook." Thus, if market conditions or Oasis Petroleum's situation deteriorates, Oasis Midstream might have to slash its dividend.

Cash could be better used elsewhere

Tyler Crowe (Cleveland-Cliffs): Anything related to industrial manufacturing or construction is probably going to get hit hard over the next couple of quarters. Iron ore miner and now steelmaker Cleveland-Cliffs is no exception. Earlier this week, steelmaker United States Steel (X 1.73%) -- one of Cleveland-Cliffs' major iron ore customers -- announced that it expects second-quarter results to come in much worse than expected from lower demand.

Cleveland-Cliffs has been relatively transparent with investors and even put out a "financial stress test" in April. That test said that it had enough liquidity that it could continue to pay dividends to investors under what it considered a worst-case scenario. While it may have the ability to continue paying dividends, that doesn't necessarily mean it's the best path forward for the company.

Right now, the company is in the middle of investing in an iron ore upgrading facility and integrating its recent acquisition, AK Steel. At the time of the acquisition, AK Steel was struggling with an onerous debt load. Integrating this business and pushing its new facility across the finish line is going to take cash, and a significant decline in business is going to make cash harder to come by.

I can't say with certainty if management will elect to cut its payout. It mentioned suspending the dividend as a cash-saving device as part of that stress test, but it didn't think it would need to do so. That said, suspending the dividend to fund its capital spending and trim some of AK Steel's debt load sounds like a prudent move right now, and investors should be prepared for it to happen.

Jason Hall (Newell Brands): This consumer-goods company has struggled mightily over the past decade. An ill-advised acquisition added substantial debt and did not deliver the commensurate returns expected. As a result, the company limped into the COVID-19 pandemic still in the early stages of selling off unwanted assets and refocusing on the brands with the most value.

As a result, the company could be forced to cut its dividend, depending on how resilient its business results prove to be. The board held firm on the $0.23 per-share quarterly dividend after the first-quarter earnings call, but there's very real reason to be worried that the decision in the second half of the year could be to cut the payout.

The reason is simple: The company burned $35 million in cash in the first quarter, and it's not a stretch to imagine it will burn substantially more in the second quarter when the impact of COVID-19 retail closures will have affected many of its retail channels.

One clue that this is likely: The company issued $500 million in new debt in late May at a 4.875% interest rate, due in 2025. Chances are the company will use some or all of this debt to repay short-term credit facilities it may have been relying heavily on in April and May.

Yes, Newell has made improvements in the past couple of years, and it did have $476 million in cash at the end of March. But it sells discretionary consumer goods that are some of the first things people cut back on during economic uncertainty. In the current environment, I think there's above-average risk that Newell's dividend doesn't survive 2020 at its present payout.

John Bromels (NuStar Energy): Energy pipeline and storage MLP NuStar Energy has a lousy track record when it comes to its distribution -- the MLP version of a dividend. The company's last distribution increase was in 2011, almost a decade ago.

Things got worse for NuStar in 2018 when the company slashed its quarterly distribution by 45.2%, to $0.60 per unit. During the oil price downturn of 2014-2017, NuStar had been racking up debt, and by 2018, its balance sheet was carrying more than $3.7 billion in debt. Cutting the distribution, according to NuStar's management, would allow it to strengthen its balance sheet by reducing its debt load.

Well, it paid down some debt, anyway. Today, it has just $3.4 billion on its balance sheet. Not much change given the size of the cut.

Despite its good intentions, NuStar found itself in the exact same position earlier this year: Oil prices had collapsed, the company's balance sheet was loaded with debt, and its projected cash flow was going to be barely enough to cover its payout. The solution: Cut the distribution again, this time by 33%, to $0.40 a unit. CEO Brad Barron claims this move will help the company "preserve cash and strengthen our balance sheet."

However, with its distribution yield of nearly 10%, an eye-popping debt load of 6.9 times earnings before interest, taxation, depreciation, and amortization (EBITDA) and a projected net loss brewing for 2020, you have to wonder how long the company can avoid falling into this same situation all over again.