When investors look at master limited partnerships (MLPs), it's usually because of their high yields. And energy infrastructure MLP NuStar Energy (NYSE:NS) is currently sitting on a mouth-watering yield of more than 8.5%. That's much higher than the yield of fellow pipeline and terminal operator Enterprise Products Partners (NYSE:EPD), which is only yielding about 6%.

But yield isn't everything. Investors also need to consider the underlying fundamentals of the business, quality of management, and what the partnership's plans are for the future. Let's dig a little deeper into these two MLPs to see which one is the better buy. 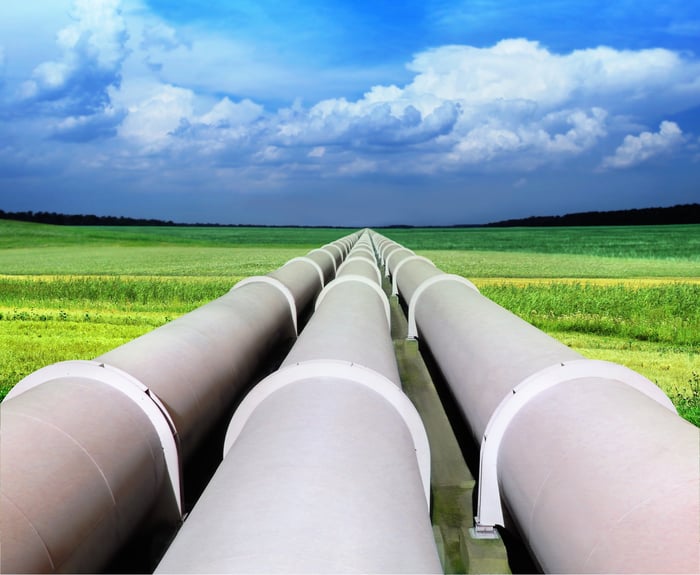 Things haven't been that pretty for NuStar in recent years. All the way back in 2011, the partnership stopped making annual distribution increases. Then, last year, it slashed its payout by 45.2%. That caused investors to flee the partnership, sending shares down about 42%.

While the distribution cut wasn't good for investors, it did allow the partnership to hit the reset button. NuStar's management was able to use the money saved plus the proceeds from an asset sale to pay off some of its high debt load, which had soared to more than $3.7 billion. Today, that debt stands at about $3.3 billion. Looking at that number in terms of the company's debt to equity ratio, it was trimmed from 2.0 to 1.1. The company also managed to up its distribution coverage ratio to 1.47 times in Q1 2019, meaning it has ample cash with which to pay its distribution.

That's good progress on NuStar's part, but the company still has a lot of work ahead of it. Despite its progress in paying down debt, NuStar's credit rating of BB/Ba2 is still in junk territory. But in order to pursue growth, it's embarking on a number of potentially high-margin expansion projects. That could put the company between a rock and a hard place if it needs to access the equity markets again. But for the time being, NuStar looks like it has quite a bit of potential upside, assuming -- and it's a big assumption -- everything goes according to plan.

On the other hand, things at Enterprise Products Partners are running smoothly...as they have been for quite some time.

Not only has the well-managed Enterprise gone 20 years without cutting its distribution, it has actually increased it every quarter for the last 59 quarters -- almost 15 straight years! In 2017, though, management made the strategic decision to slow its payout growth in order to invest more of its cash flow back into the business. That strategy has been paying off as the company has experienced explosive growth, so much so that it's even been able to start buying back shares.

That growth was on display in the company's most recently completed quarter, Q1 2019. Distributable cash flow increased by 18% over the prior-year quarter, while net income was up 39.8%. The partnership brought $1.9 billion in new assets online during the quarter, and it has another $3.5 billion of assets under construction that it expects to bring into service before 2020. It's done all this while keeping its debt levels under control, with a debt to equity ratio of just 0.4 and an investment-grade credit rating of Baa1/BBB+.

While NuStar has made admirable progress in turning itself around and has a higher yield than Enterprise Products Partners, there's really no contest between them: Enterprise looks like the winner, hands down. Its management team has a lengthy track record of outperformance and distribution increases, while NuStar's management needs to earn that kind of trust from investors after a big distribution cut. Meanwhile, Enterprise is on much firmer financial footing with a much lower debt load.

That's not to say that NuStar is necessarily going to be a dud: If management can execute well, continue to reduce its debt load, and bring enough high-margin projects online, the MLP (and its investors) could have a bright future. But it's not as sure of a thing as Enterprise Products Partners. Enterprise is clearly the better buy.