Please ensure Javascript is enabled for purposes of website accessibility
Log In Help Join The Motley Fool
Free Article Join Over 1 Million Premium Members And Get More In-Depth Stock Guidance and Research
By Tyler Crowe – May 2, 2019 at 7:46PM

The oil and gas pipeline giant keeps putting new assets to work, and it's showing up in the financial statements in a big way.

For investors that have become rather accustomed to Enterprise Products Partners' (EPD 2.56%) consistent growth over the years, the company's most recent string of results has been particularly impressive. Thanks to management's decision to allocate more cash flow to grow the business back in 2017, the company's growth has been spectacular -- so much so that it even started to buy back some shares, as it said it would on its prior quarterly report.

Let's take a look at Enterprise Products Partners' most recent earnings results to see what investors can expect for the rest of the year and beyond. 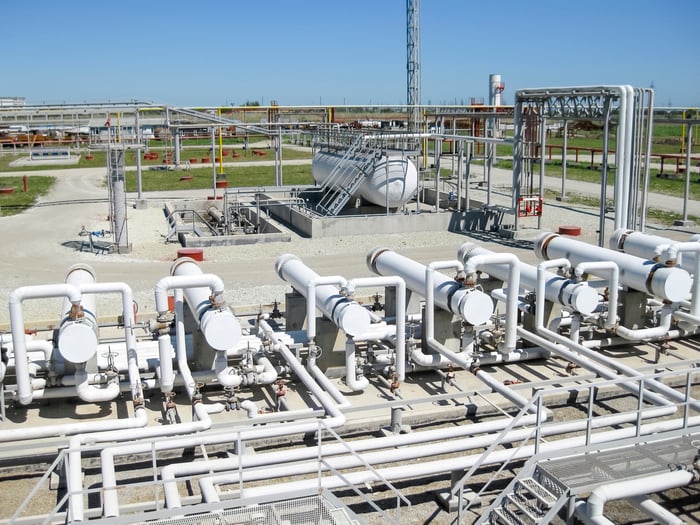 For the second quarter in a row, Enterprise reported record results both operationally and financially. That shouldn't be too surprising, though, because the company continues to put new assets into service rather routinely, and most of those assets are running at high utilization rates. While some of those gains are one-time paper gains related to revaluing its inventories and contracts, these kinds of fair value accounting gains all tend to even out over time. 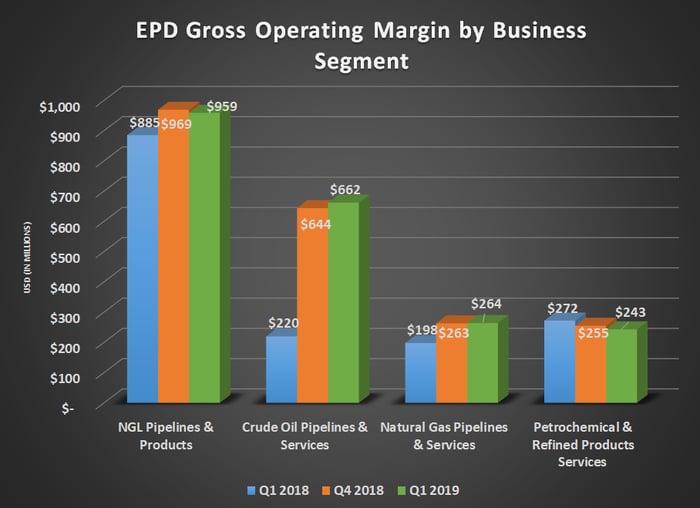 With crude oil production growing at incredible rates across the U.S., especially in the Permian Basin, some investors are wondering how much longer it can last. According to Enterprise CEO Jim Teague, there is still a lot of room to run not just in 2019 but overall.

Overall business fundamentals remain strong for the partnership's integrated midstream system. We continue to benefit from production increases in the Permian and Haynesville shale regions, while demand for U.S. crude oil, NGLs and refined products remains strong in both domestic and international markets. Our crude oil marine terminals reported record volumes of nearly 900,000 barrels per day in the first quarter of 2019 despite the temporary closure of the Houston Ship Channel. With Permian crude oil volumes forecasted to increase by approximately 700,000 barrels per day in 2019, we believe substantially all of this increase in volumes will be destined for international markets. In addition, we expect approximately 300,000 barrels per day of new ethane demand from ethylene facilities on the U.S. Gulf Coast forecasted to begin operations during the remainder of 2019.

You can read a full transcript of Enterprise Products Partners' conference call here.

These statements are just a part of a larger prediction that Enterprise Products outlined in its most recent analyst day production. By its estimates, the U.S. will be exporting more crude oil and condensate than Saudi Arabia by 2025, and it wants to be a major player in this game, with several crude oil export terminals either under construction or on the drawing board as we speak. 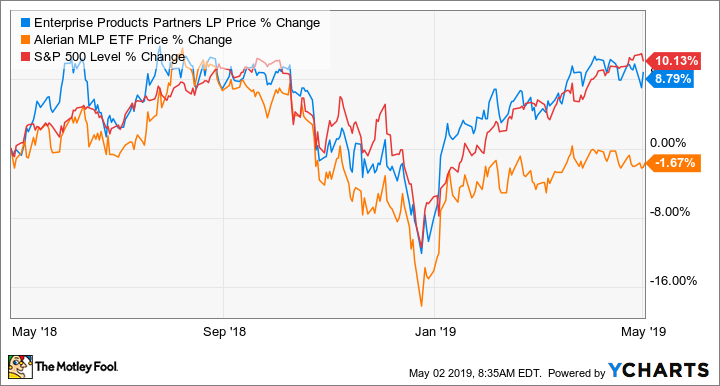 One of the things that Enterprise Products Partners' management prides itself upon is its ability to deliver results to investors. Over the past few years, it has done just that by growing its bottom line and investing heavily in the rapid expansion of America's oil and gas industry. Thanks to management's decision to slow its payout growth, it's now on pace to retain more than $2.5 billion in cash after making distributions to shareholders. Deploying that much cash on investments instead of relying on debt or issuing shares has helped reduce its debt-to-EBITDA ratio and makes its current payout levels appear ready to handle a drastic industry downturn should one come any time soon.

For the rest of the year, investors should probably expect more of the same. Distributable cash growth in the high-single- to double-digit range, improving leverage metrics, and modest payout growth. The slow payout growth may be a little frustrating considering how fast the business is growing, but it appears that management still has a lot of growth projects on the docket.