Please ensure Javascript is enabled for purposes of website accessibility
Log In Help Join The Motley Fool
Free Article Join Over 1 Million Premium Members And Get More In-Depth Stock Guidance and Research
By Jeremy Bowman – Jun 17, 2020 at 8:55AM

Retail sales recovered strongly from April, but not everyone was a winner.

May retail sales numbers were much better than expected, sending stocks higher on Tuesday.

Overall retail sales rose 17.7% from April according to the Census Bureau, but were down 6.1% from a year ago, showing that while the economy is recovering, there is still work left to do. That was more than double the 8.4% growth that economists had expected, however.

The monthly retail sales report is closely watched even in a normal economy, as it offers a detailed look at consumer spending. But during the pandemic the monthly numbers have become especially important, as normal shopping habits have been turned upside by stay-at-home orders, social distancing, and general fears of the virus.

With the latest snapshot of the U.S. economy hot off the press, let's take a look at the winners and losers last month. 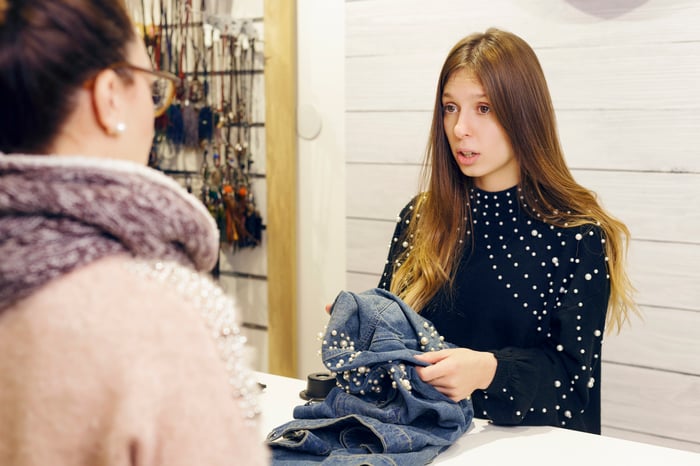 Car sales saw a surprising recovery, as sales were down just 3.9% year-over-year in the month, improving from a drop of 33% in April. Though recessions are generally correlated with declines in car sales, the recovery shows Americans eager to resume car-buying, which may be aided by social-distancing needs as commuters have been avoiding public transit.

One of the clearest signs that daily life has still not returned to normal is that gasoline sales were down 30% in the month. Though that's partly because of lower gas prices, it also indicates that Americans are driving less frequently than they were a year ago because of the pandemic as many continue to work from home.

Though investors are clearly encouraged by the results, which were the fastest month-over-month growth numbers on record, they may have been artificially boosted by stimulus payments that went out in April. The May numbers may fit with other evidence of a "V-shaped recovery," but we'll have to see if consumer spending levels can continue to make a strong recovery, as fears of a second wave of infections are rising in some states and government assistance will soon begin to fade away.