With a strategy of acquiring smaller players, this telecom aims to become the region's most prominent name in its industry.

Liberty Latin America (LILA 0.14%) (LILAK), a cable, phone, and internet provider serving more than 20 countries in Latin America and the Caribbean, including Chile, Panama, Puerto Rico, and Costa Rica, has built itself through a patchwork of acquisitions over the years, most notably its $7.4 billion purchase of Cable & Wireless Communications in 2016.

In line with its long-term strategy of "rolling up" assets in the region, the company has two more acquisitions that will expand its footprint. Specifically, the company is expanding into wireless in Puerto Rico and Costa Rica, where it already offers cable internet services. Liberty Latin America already offers mobile phone services in conjunction with cable internet in several markets including Panama, Jamaica, and Chile. Therefore, the move to add mobile in Puerto Rico and Costa Rica is a continued push into offering more services in its covered regions.

It is acquiring AT&T's Puerto Rico and Virgin Island assets

Liberty Latin America already has a sizable business in Puerto Rico, where it has provided access to TV and internet services for years. Missing from that package has been wireless phone service -- until now.

Late last year, the company announced a deal to acquire AT&T's Puerto Rican and U.S. Virgin Island wireless business in an all-cash $1.95 billion transaction. It's a solid strategic fit for the buyer. Once the deal closes -- which is expected to happen this year -- Liberty will be able to offer customers a triple-play bundle (TV, phone, and internet), and those have proven to be effective tools for up-selling customers onto more services and keeping them from changing providers.

The acquisition will also expand the portion of revenue and earnings the company derives from Puerto Rico, which has historically been a stable market to operate in relative to other Latin American countries. The island is expected to contribute more than $1.2 billion in revenue to Liberty's coffers annually, and the additional infrastructure on the island will provide some cost synergies, boosting profitability. 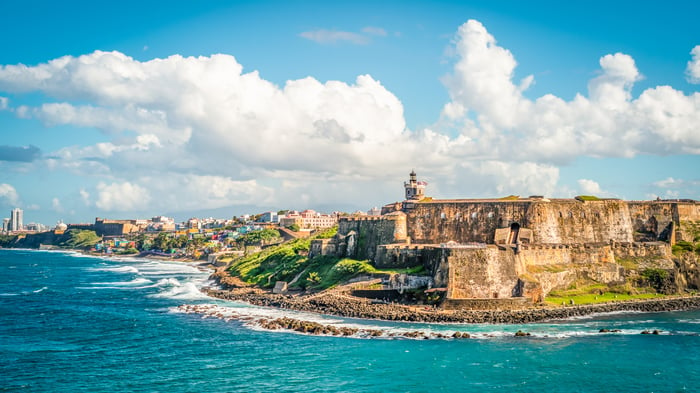 The more recent acquition news comes from Costa Rica, where -- again -- Liberty Latin America has had a strong position in the internet and TV segments, but has lacked a wireless offering. On July 30, the company announced it would acquire Telefonica's wireless business in the country -- where it has been the second-largest player -- for $500 million.

This deal will serve a similar strategic purpose as the AT&T deal, and will enable Liberty Latin America to offer more services to its Costa Rican customers. This should enable cross-selling of additional telecom services and drive cost synergies due to shared infrastructure and lower overhead costs.

Telefonica has for years consistently grown the revenue from its Costa Rica business at single-digit percentage rates while growing earnings at double-digit percentage rates. Liberty Latin America views that financial profile as attractive, and also anticipates that it will be able to add value by investing in enhanced services such as faster internet speeds and greater bandwidth. The deal will bring it 2.3 million mobile subscribers and provide Liberty Latin America with an LTE wireless network that covers 90% of the country.

The deal will solidify Liberty Latin America's position as a telecommunications powerhouse in Costa Rica. It's expected to close in the first half of 2021. The company did not provide detail on how much revenue it expects to be added from the acquisition, but given the $500 million purchase price, it is fair to say the company expects it will be meaningful for the Costa Rican geographic segment.

These two transactions further demonstrate that Liberty Latin America is intent on continuing to execute its roll-up growth strategy in which the company relies on acquiring smaller competitors to expand geographically or acquire their customers. Roll-ups -- like Liberty Latin America -- often use debt to maximize the financial benefits of the acquisition. In this case, both target companies (AT&T Puerto Rica & Telefonica Costa Rica) are relatively small compared to the buyer, which should make them easy to digest. But together, the transactions represent a significant expansion of subscriber base and capabilities.

Liberty Latin America Chairman John Malone has a reputation for pursuing similar roll-up strategies in other markets. His most successful roll-up was accomplished with Tele-Communications Inc. (TCI), where Malone served as chief executive officer. From 1973 to 1989, TCI acquired more than 480 companies, and became a top U.S. cable provider. Malone sold TCI to AT&T in the late 1990s. Malone has continued to invest in a whole host of internet, media, and telecom companies.

Many investors are hoping Malone can repeat his successes with Liberty Latin America. The acquisition strategy he's employing is certainly reminiscent of what he did with other entities, but only time will tell if the strategy works as well in Latin America's telecom markets.

Why Global Warming Is This Cable Company's Biggest Risk Factor