It might seem odd that a nebulous risk such as climate change would be top of mind for shareholders in a cable company, but that's the case at Liberty Latin America (NASDAQ:LILA) (NASDAQ:LILAK) these days. Liberty Latin America serves customers with pay-TV and broadband internet in 18 countries across Latin America and the Caribbean. Increasingly frequent and powerful hurricanes and tropical storms have caused damage that has set back earnings growth and required companies to invest more in durable infrastructure.

By far, the biggest setback for the company caused by a natural disaster was the damage caused in Puerto Rico in 2017 by Hurricane Maria. The Category 5 hurricane caused not only severe damage but also a humanitarian crisis -- destroying roads, flooding homes, and wiping out access to power and safe drinking water on much of the island for months (and in some cases over a year). 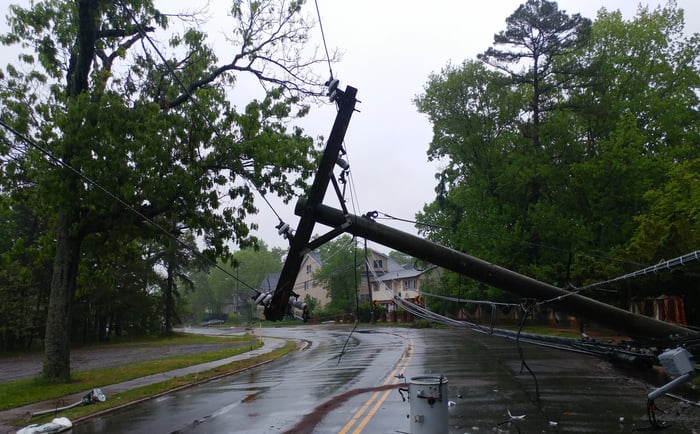 Puerto Rico is one of Liberty Latin America's largest geographic segments; in 2016, the company booked $421 million in sales on the island. Obviously, widespread power outages resulted in service outages for the cable operator, which in turn led to a sharp decline in business. Revenue fell 24% in 2017 -- from $421 million to $320 million -- and only improved by 4% in 2018. Financial metrics are still recovering.

Fortunately, the company's insurance paid out disaster claims totaling $121 million in 2018. This total included funds for damages related to hurricanes Irma (2017) and Matthew (2016). It took almost a full year for Liberty Latin America to repair the damage to its Puerto Rican cable assets, but the company noted that it completed the fixes by the third quarter of 2018 at a total cost of $142 million.

Although most of the infrastructure has been restored, the Puerto Rican market may never be the same. Many Puerto Ricans are permanently displaced, having left the island after their homes were destroyed, and Puerto Rico's economy is much smaller today compared to three years ago.

Unfortunately, 2017's Category 5 hurricane was not a one-time event. In 2019, the Caribbean also experienced an active hurricane season, and for Liberty Latin America, the largest impact came from Hurricane Dorian, another Category 5 storm that affected its operations in the Bahamas in September this year.

The company is still tallying the total damage done from that storm. The good news is that it appears to be far less than that caused by Hurricane Maria. Liberty Latin America estimates that the storm negatively affected its 2019 earnings by $5 million to $8 million, and that it will need to expend around $25 million to repair the damage. The repairs will likely take several quarters to complete.

Mitigating the risk of climate change

Neither Liberty Latin America nor any other company can control the prevalence or severity of natural disasters. However, there are a couple of things it can do to mitigate the impact of future hurricanes.

First, Liberty Latin America can build better infrastructure that is more resistant to high wind speeds and flooding. For example, burying broadband cables deeper underground, and reinforcing those pipes with stronger materials, can reduce the impact from above-ground conditions. While the company can't go back to lay its network differently, it can take some precautions as it rebuilds the infrastructure that was damaged by the storms.

Second, it can buy more comprehensive insurance coverage, or set aside more cash as self-insurance that can be used during times of crisis. Given the locations of Liberty Latin America's assets, disruption caused by tropical storms should be considered a cost of doing business.

Finally, now that the company has been affected by natural disasters in multiple markets, it can improve its response plans and procedures to ensure as smooth a restoration period as possible.

Unfortunately, none of these solutions will prevent future disruptions caused by hurricanes or other natural disasters. Investments in more secure infrastructure and better insurance policies are also quite expensive. Investors in Liberty Latin America's stock should be aware of these risks because they've been a recurring theme in recent years.