Which of these two top car companies will outperform the other?

You'd think comparing two car companies would be easy. Not when those car companies are legacy automaker Ford (F 1.29%) and hot electric car company Tesla (TSLA). Yes, both of them manufacture automobiles, but that's pretty much where the similarities end.

Tesla's stock has been on a tear in 2020, while Ford's has languished. Does that mean Ford is a better buy, or Tesla? Let's find out. 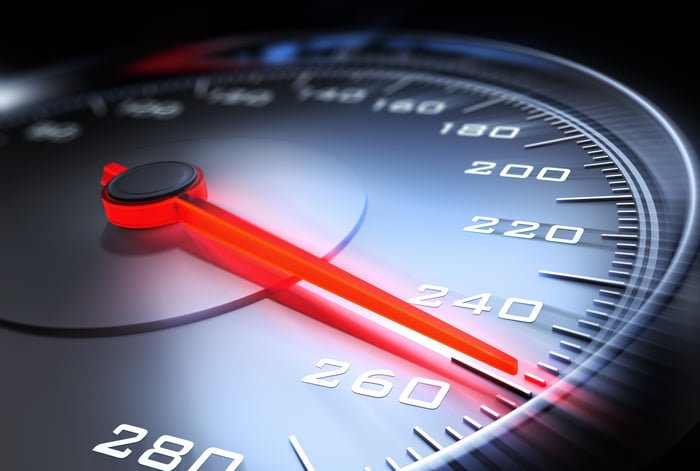 No matter what timeframe you look at -- the past one, three, five, or ten years -- Tesla's stock performance has crushed Ford's. For example, here's the last five years: 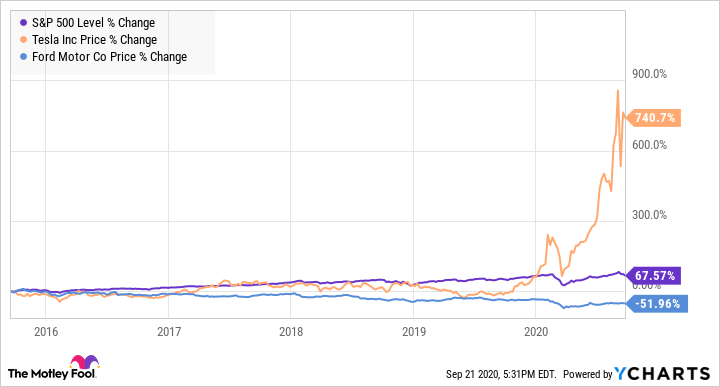 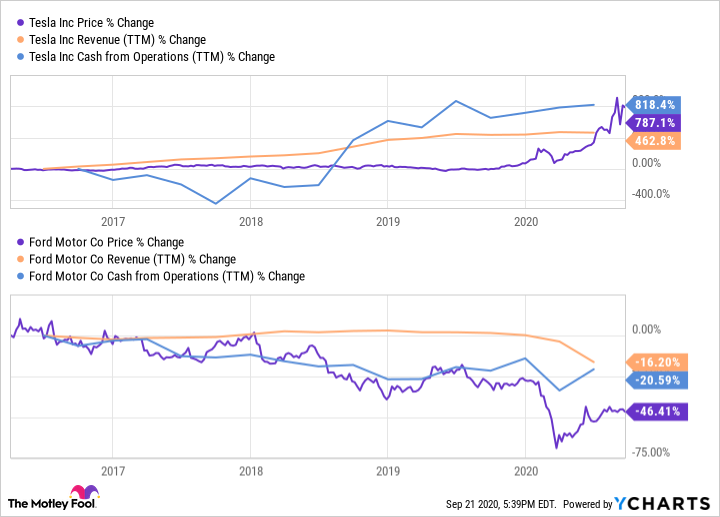 As a smaller company, Tesla had (and has) more room to grow than the well-established Ford. Consider their vehicle production: Ford's 2.4 million vehicles sold in 2019 absolutely dwarf Tesla's 367,500 deliveries that year.

Tesla, however, has largely had the U.S. electric vehicle market to itself, at least in terms of battery-electric sedans (Model S, Model 3) and crossover SUVs (Model X, Model Y). The story has been similar in other major markets like China and Europe. That's set to change, with a number of automakers -- some well-established and some new -- promising electric vehicle models galore in the next two years. Ford, for example, has sold out its preorders for a battery-electric crossover SUV, the Mustang Mach E, and just broke ground on an electric F-150 pickup plant.

So, while Tesla's sales are likely to continue to grow, competition in the EV market may put that growth on a slower trajectory than in recent years. Meanwhile, Ford's sales are almost certain to recover from its 2020 dip during the pandemic. Will that be enough to buoy its long-underperforming share price?

From a value perspective, Ford is clearly superior to Tesla, even when the latter company's potential for growth is factored in. Here's how the two (along with rival Toyota) compare when measured on three common valuation metrics: 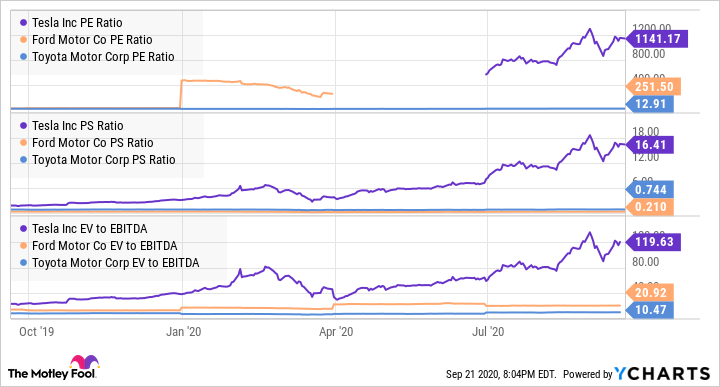 Tesla's valuation is astronomical by all three measures -- even more so when you note that Ford's P/E ratio has skyrocketed in 2020 as a result of its pandemic-related underperformance; it was just 22.6 at the end of 2019.

Tesla's sales simply don't justify its current status as the largest car company in the world by market cap: At $409.1 billion, it's more than twice the size of second-place Toyota and about 15 times the size of Ford. Yet, remember, it sold only about 15% the number of vehicles Ford did in 2019, at margins that were not much higher than its peers'.

From a value standpoint, Ford is clearly the superior company.

In choosing between Tesla and Ford, investors need to choose between a fast-growing company with an astronomical valuation, and a longtime underperformer with a more reasonable valuation. Which should investors pick? It depends on whether each company can capitalize on its current growth initiatives.

Ford has been retooling its vehicle lineup, and will soon roll out an updated version of its F-150 pickup -- the company's biggest cash cow -- as well as its Bronco SUV line and the aforementioned electric F-150 and Mustang Mach E. Ramping up will take time, so investors shouldn't expect a rapid turnaround here. However, if these new models catch on, their superior margins should at least help Ford's stock recover from its current lows. A tepid market response to the new designs, on the other hand, would likely keep Ford's share price depressed.

Tesla, meanwhile, is rolling out its Model Y crossover SUV, rapidly expanding its manufacturing capacity with new "Gigafactories" in Berlin and Austin. It's also developing the futuristic Cybertruck and battery-powered Semi. If Tesla can grow sales of these new models -- and its current Model 3 -- enough, especially in overseas markets, and maintain decent profit margins on its more affordable Models 3 and Y, it could continue its growth streak, and investors would likely bid its already overvalued shares even higher. On the other hand, if increased competition or market malaise puts a dent in its sales, or if it can't squeeze high enough margins out of its lower-priced models, the market will likely punish the stock.

Right now, with Tesla's stock at incredible highs and Ford's at incredible lows, Ford looks like the better buy. The legacy automaker has growth potential with its new vehicle lineup and a valuation that's much more reasonable than Tesla's.

However, a lot depends on what happens with each company moving forward. The automotive landscape -- particularly among EVs -- will change a lot over the next few years. Either company (or both) could soar or sink in response.