Please ensure Javascript is enabled for purposes of website accessibility
Log In Help Join The Motley Fool
Free Article Join Over 1 Million Premium Members And Get More In-Depth Stock Guidance and Research
By John Bromels – Jul 8, 2020 at 7:45AM

Elon Musk's iconic electric-vehicle maker is breaking all the rules. Is that good or bad?

One of the most mysterious stocks on the market these days is Tesla (TSLA -4.59%).

It's not mysterious because the company is tough to understand; its business of manufacturing and selling cars is pretty straightforward. It's mysterious more because the company's financials are so hard to evaluate. At any given moment, Elon Musk's electric vehicle juggernaut can seem to be simultaneously crushing expectations, missing deadlines, losing money, and gaining market share.

Let's see if we can sort through all the contradictions and figure out whether Tesla's stock is a buy right now. 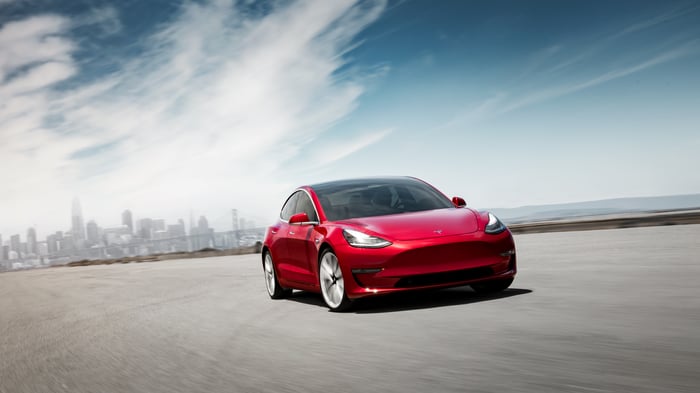 The first thing you'd probably do if you were trying to evaluate a "normal" car company's financials is to look at its valuation metrics -- like price-to-earnings ratio -- and compare them to their historic levels, as well as to those of other car companies.

With Tesla, though, there's a problem: The company hasn't posted an annual profit in 10 years, and only began generating positive free cash flow in the third quarter of 2019. That means figures like P/E ratio can't be computed, and metrics like price-to-free-cash-flow ratio can't be compared historically.

For those metrics we can measure, like price-to-sales or enterprise-value-to-EBITDA, Tesla's numbers are in their own version of Ludicrous Mode: 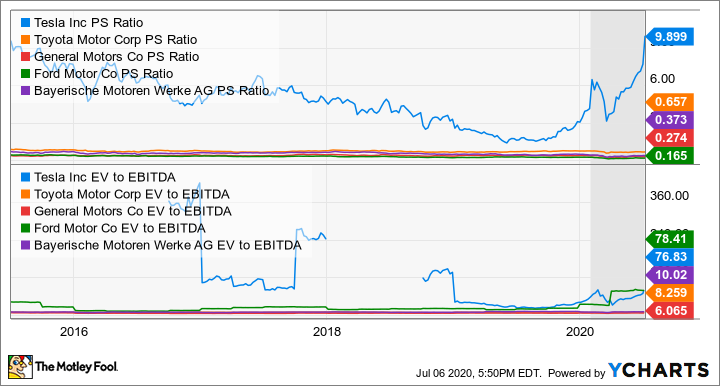 Tesla's price-to-sales ratio (the blue line in the upper chart above) is more than 15 times Toyota's (TM -1.27%), and more than 36 times General Motors' ratio. Meanwhile, Ford's EV-to-EBITDA ratio (the green line in the lower chart above) is currently higher than Tesla's -- thanks to the collapse of Ford's EBITDA in Q1 2020 -- but Tesla's (blue line) is more than seven times BMW's. Yet Tesla has much lower revenue and cash flow than all four of these other companies.

By the numbers, Tesla looks ridiculously overpriced, and nothing even resembling a buy.

Some Tesla bulls argue that because it's a fast-growing, disruptive company, measuring it against mature car companies like Toyota or GM is unfair.

But even though Tesla is now the most valuable car company in the world, with a market cap of $258.4 billion, No. 2 Toyota, with a $175.7 billion market cap, brings in more than 10 times Tesla's revenue, cash flow, and gross profits:

Tesla is targeting a 25% gross margin on its automotive sales. That's high for an automaker, but if Tesla can consistently generate a 25% gross margin, it will be making about a $10,000-$15,000 gross profit on each Model 3 or Model Y it sells. By contrast, Toyota's average gross profit in its last fiscal year was about $5,000 per vehicle. So, for Tesla to earn a valuation similar to Toyota's, it should be able to sell at least one-third the number of vehicles Toyota sells in a year, which would be roughly 3.4 million, or about 10 times the number Tesla actually sold last year.

To ramp up production to 10 times current levels, Tesla would need to open additional factories beyond its flagship Fremont, California, factory, its newly opened Shanghai factory, and a planned European factory in Germany. That will take years, if not decades. Toyota already has dozens of manufacturing plants around the world, including 14 in the U.S. alone.

Moreover, Toyota offers more than a dozen different models, including the cheap subcompact Yaris, the full-size Highlander SUV, and the Tacoma pickup truck, to appeal to all types of buyers. Tesla currently offers four models: two crossover SUVs and two sedans. In short, Tesla's got moxie, but it's no Toyota.

Certainly, Tesla could grow to the point at which it justifies its current valuation -- eventually. But I'm not sure it's worth the wait. And there's no telling where the share price will be once we hit that point. Tesla's stock is already so divorced from its fundamentals that it's impossible to tell. I suspect it may continue to climb in the short term, especially if it joins the S&P 500.

If you think that Musk and company have hit on a winning formula to grow sales tenfold in 10 years or so, you may want to take a gamble and buy-in to this trendy stock, even at today's premium price. Most investors, though, will probably want to look elsewhere for value.