Please ensure Javascript is enabled for purposes of website accessibility
Log In Help Join The Motley Fool
Free Article Join Over 1 Million Premium Members And Get More In-Depth Stock Guidance and Research
By James Brumley – Oct 9, 2020 at 9:07AM

Recent numbers from Reelgood point to a slow, incremental migration away from paid subscription services.

It's not an existential crisis for the streaming giant -- at least not yet.

Don't ignore the subtle hint buried in that data.

TV commercials are tolerable after all

Relatively is an important distinction here, to be fair. Still stuck at home thanks to coronavirus concerns, most consumers are spending much more time in front of the TV than they normally might have before COVID-19 took hold. A OnePoll survey commissioned by Fox's (FOX 0.68%) (FOXA 0.68%) ad-supported streaming service Tubi found that by April, the average person was consuming about eight hours' worth of streaming content per day. The figure's been reeled in a bit in the meantime, but Nielsen says streaming time remains well above pre-COVID levels. 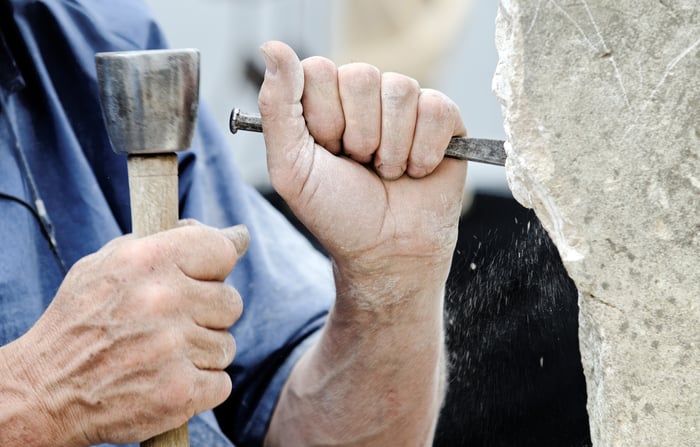 Netflix still isn't capturing its proportional share of that added viewing, though. The company's share of Reelgood's total streams during the third quarter of this year fell to 25%, down from Q2's 32%. Walt Disney (DIS -0.01%) missed much of this increased interest as well, with Hulu's proportion of Reelgood's total streams slipping from 19% to 15% during the third quarter. Impressively, the relatively new subscription-based HBO Max from AT&T (T 0.16%) and Prime from Amazon prompted increases in streams that pulled people away from Netflix and Hulu.

Perhaps the showstopper of Reelgood's report, however, is the data that casts a questionable light on all the for-pay streaming services. That is, the entire paid-subscription video market's streams fell from 52.3% of all stream starts in Q2 to only 47.5% of Q3's streams. Ad-supported streams, conversely, grew from 25% of Reelgood's streams in Q2 to 30.8% during the third quarter.

Simply put, consumers are watching a lot of free TV despite the ads and despite less choice among their ad-supported options.

Keep the data in perspective. Total viewing time may have still increased per Netflix user; whether or not they watched more or less Netflix content, that subscriber is still paying the same monthly fee.

Nevertheless, it's another anecdotal piece of evidence that Netflix's hold on the streaming media market isn't as strong as it once was.

It's not too difficult to understand why. A Deloitte study done after the coronavirus contagion made landfall in the United States found that cost was the key reason consumers canceled a streaming video on demand (SVOD) service. The Deloitte report further clarified that value rather than price alone weighed on such decisions. Before free alternatives were available, Netflix offered enough value at its going rate. With ad-supported alternatives like Pluto from ViacomCBS (NASDAQ: VIA) (PARA 1.27%) or Comcast's (CMCSA 0.34%) Peacock now available, the previously supported price of a Netflix subscription is tougher to justify.

In this same value-minded vein, ad-supported video on demand (AVOD) services generally do a better job of updating their libraries with new content than rival streaming video on demand players like Netflix or Walt Disney's Hulu do. According to a recent report from Ampere Analysis, only about 5% of an SVOD's library is new in any given month, while 11% of the typical AVOD's library is updated monthly. The free-to-watch library from Roku (ROKU -0.76%) and the aforementioned Pluto earned particularly high marks in this regard. Netflix scored near the bottom, replacing less than 3% of its library every month.

Netflix shareholders will be quick to point out with about 36,000 hours' worth of watchable content available on Netflix at any given time, even significant monthly swap-outs are a mathematically small percentage of its total amount of content. AT&T's HBO Max only boasts about 10,000 hours of programming, while Comcast's Peacock offers in the ballpark of 13,000 hours of entertainment for free users and up to 20,000 for paying subscribers.

No single consumer can watch anywhere near those amounts of streaming television, leading them all back to the newest and biggest overarching matter -- finding the most relevant content to them at a price that's palatable.

One quarterly headwind isn't a death blow for Netflix or Hulu. These are unusual times, and most consumers aren't yet regular users of AVOD options. Comcast's ad-supported Xumo recently reported it was serving 24 million monthly viewers -- a small fraction of Netflix's 193 million paying subscribers. Tubi's headcount was 33 million as of August. Pluto's only got 26.5 million people on board, according to ViacomCBS's most recent quarterly report.

Look at their growth trajectories. Tubi's viewership grew 65% year over year a quarter ago. Xumo's base has more than doubled since the end of 2019. Pluto's viewers were up more than 60% as of the end of June. Each still has tens of millions of Netflix customers to tempt in the foreseeable future. Some will surely defect.

In this light, not only do Reelgood's Q3 numbers make sense; Netflix and Hulu's portion of total streams could continue to fall as consumers continue to find ad-supported alternatives.