Glu Mobile (NASDAQ:GLUU) and Sierra Wireless (NASDAQ:SWIR) have delivered impressive -- if somewhat volatile -- gains since the market crash in late February and early March, and these two growth companies are likely to sustain their momentum thanks to a solid set of catalysts working in their favor.

Let's take a look at some of the reasons why these two stocks have what it takes to break higher. 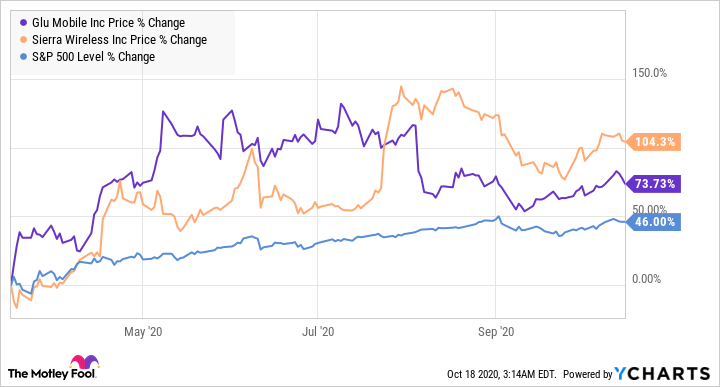 Glu Mobile is stepping on the gas

Glu Mobile's stock price rally came to a halt in August after the company's second-quarter earnings report fell short of Wall Street estimates. But savvy investors shouldn't worry much about this single quarter of results, and they should also not ignore that as there were several positive takeaways in the report as well.

For instance, Glu Mobile's user base is increasing at an attractive pace, and those users are spending more money when they play its games. It had 3.8 million daily active users at the end of the quarter, up nearly 19% from the prior-year period. What's more, average bookings per daily active user also increased more than 51% year-over-year to $0.53.

This encouraged the company to raise its annual bookings guidance from $507.5 million to $543 million. Glu Mobile had $423 million in bookings in 2019, and generated revenue of $411 million. The updated bookings figure indicates that it is on track to record solid top-line growth this year given the rate at which it converts its bookings into actual revenue.

Glu Mobile's impressive growth so far this year isn't surprising. Lockdown measures put in place to contain the novel coronavirus earlier this year have led to an increase in the number of people playing mobile games. Newzoo estimates that mobile gaming revenue could jump 13.3% in 2020 to $77.2 billion. What's more, mobile is expected to remain the fastest-growing gaming segment through 2023, paving the way for Glu Mobile to sustain its high rate of growth.

More importantly, Glu Mobile is capitalizing on the growing demand for mobile gaming with a wide portfolio of games and a strong pipeline for 2021 that it believes could help it "grow at or higher than the Western mobile market," according to management comments during the earnings call. That's why investors looking to take advantage of the mobile gaming industry should take a closer look at Glu Mobile, as it trades at less than 18 times forward earnings and looks capable of delivering attractive top- and bottom-line growth.

Sierra Wireless looks all set to make a comeback

Once a hot Internet of Things (IoT) play, Sierra Wireless appeared to have has lost its way over the past couple of years. But the chipmaker has shown signs of life in the past few months as it's pivoted toward a service-centric model to take advantage of fast-growing IoT niches such as managed solutions, connectivity services, and industrial cloud-to-edge connectivity.

Sierra's focus on these markets is expected to create a high-margin, recurring stream of revenue that should lead to better bottom-line performance. According to analyst estimates compiled by Yahoo! Finance, Sierra Wireless' loss could widen to $0.95 per share in fiscal 2020 from $0.01 per share last year. A sharp turnaround is expected next year, however, with Sierra narrowing the loss per share to $0.07.

And Sierra Wireless is also expanding beyond IoT into another fast-growing market: 5G (fifth-generation) wireless networks. The company recently released 5G embedded modules that support different spectrum bands, such as mmWave, Sub-6 GHz, and LTE (long-term evolution), in a single platform. The market for such chips is expected to grow at a terrific pace.

The advantage for Sierra Wireless is that the company's 5G products are gaining traction among potential customers. CEO Kent Thexton pointed out over the second-quarter earnings conference call that: "We have 15 design wins to date with some key customers, and the market interest looks good." He also added that the company will continue to build a 5G product pipeline in the coming months, including "several high-end 5G gateways and routers for industrial and enterprise applications."

Sierra management believes that the rollout of 5G networks will start having a positive impact on its revenue in 2021, assuming its new modules supporting the next-generation network are out by the end of the year. As such, investors looking for a 5G stock trading at a low share price of around $10 should keep a close eye on Sierra Wireless, as it has the potential to win big from this market.