Please ensure Javascript is enabled for purposes of website accessibility
Log In Help Join The Motley Fool
Free Article Join Over 1 Million Premium Members And Get More In-Depth Stock Guidance and Research
By John Ballard - Sep 3, 2020 at 7:36AM

Shares took a nosedive following the second-quarter report, but a closer look shows a mobile game business on the rise.

Glu Mobile's (GLUU) top three franchises delivered record bookings in the second quarter, but that didn't prevent the shares from tumbling over the last month. Earnings per share came in below analysts' forecasts, but the high engagement levels across Glu's top games put it on track to end the year with plenty of cash to reinvest in the business for long-term growth.

Here's why Wall Street's focus on the earnings miss is a good buying opportunity for investors with a long-term focus. 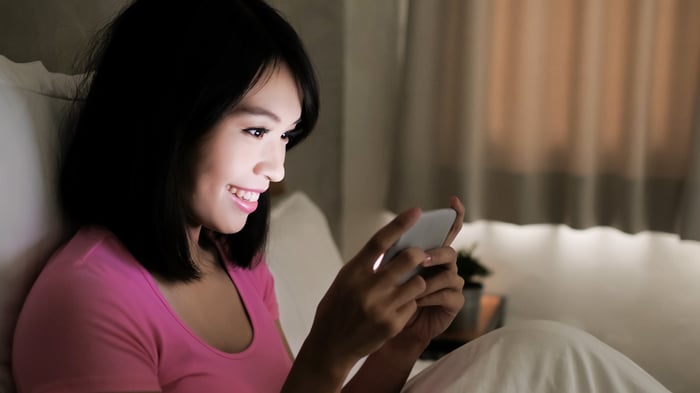 Glu's top three growth games, Design Home, Covet Fashion, and Tap Sports Baseball, drove a 40% year-over-year increase in revenue and 79% growth for bookings. The performance was credited to an increase in organic installs, investment in user acquisition, and more players spending money on in-app content, as a result of the shelter-in-place dynamics.

The company also benefited from the successful launch of Disney Sorcerer's Arena, which contributed $22 million in bookings, and an acceleration in growth from Kim Kardashian: Hollywood. The latter has been a popular celebrity lifestyle game since launching in 2014, so it's impressive that the franchise grew bookings by 320% year over year despite its age.

Glu Mobile might have missed Wall Street's estimates, but the company delivered results that exceeded management's expectations. Management raised full-year guidance for bookings, now looking at a range of $538 million to $548 million, representing growth of 28% at the midpoint over 2019.

Most importantly, management expects to generate approximately $40 million in free cash flow for the year, which would be a significant improvement over $30 million generated in 2019. Glu Mobile expects to end the year with approximately $325 million in cash and no debt on the balance sheet, and that opens the door for investment opportunities to grow the business from here.

While management noted that bookings growth in the third and fourth quarter is likely to moderate as the economy reopens, there are a few catalysts to watch that could fuel the stock long term.

First, Glu is enjoying a favorable environment for user acquisition with cost per install declining amid the pandemic. Management believes this is an ideal time to invest to expand the user base, which stood at 3.8 million daily active users, representing an increase of 17% year over year in the second quarter.

The second catalyst to watch is continued growth within Design Home, as CEO Nick Earl noted in his 2019 shareholder letter.  "As successful as Design Home has been, we expect the franchise to continue to grow," he said. "We intend to build infrastructure to bring the game to other platforms such as web browser and are looking at e-commerce opportunities as well as expanding our growth in Europe."

The e-commerce initiative is currently in beta and showing encouraging early results. If that promise holds, management plans to launch a U.S. e-commerce store within the game in the fourth quarter.

Third, Glu is looking to put its cash to work with acquisitions. This has been a key part of Zynga's outperformance in recent years. Glu Mobile is starting to reach the cash levels on its balance sheet where it can acquire larger studios to deliver meaningful returns to investors.

"The Glu team has a proven track record of identifying exceptional studios and games," Earl stated during the second-quarter call. "Our three growth games, along with Diner DASH and Kim, were all developed out of our acquisitions."

It's noteworthy that Glu Mobile's 40% growth in revenue was roughly in line with Zynga's 47% growth in the most recent quarter, and bookings growth of 79% was double that of its larger rival.

As is often the case, it appears Wall Street got too wrapped up in the quarter-to-quarter beats and misses, losing sight of the longer-term trends affecting the business. 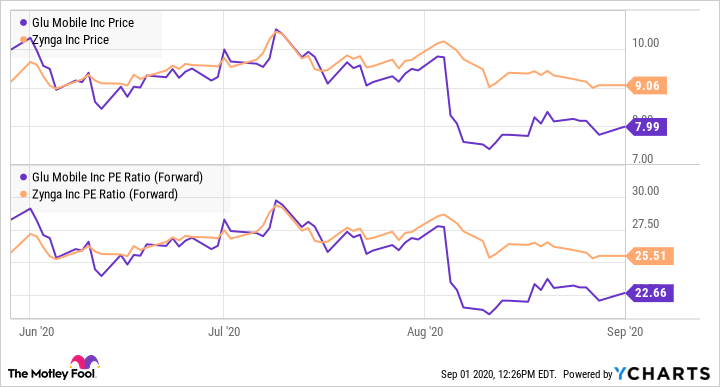 The recent dip is a buying opportunity. Glu Mobile is seeing strong growth from new and old releases, and there is another potential winner with Deer Hunter World. That newest title was delayed, allowing the development team more time to work on the game, but it is expected to release in 2021.

Glu Mobile trades at a forward price-to-earnings (P/E) ratio of 22.4, lower than its peer and low enough for investors to take advantage of Glu Mobile's strong outlook as it continues to outgrow the video game industry.