Please ensure Javascript is enabled for purposes of website accessibility
Log In Help Join The Motley Fool
Free Article Join Over 1 Million Premium Members And Get More In-Depth Stock Guidance and Research
By Harsh Chauhan – Aug 22, 2020 at 9:15AM

This mobile gaming company's stock has plunged of late, but there's more than meets the eye.

Investors were quick to press the exit button, and Glu stock plunged big time, which wasn't surprising as it had become expensive of late. But there were several positive takeaways from the company's quarterly results that shouldn't be ignored as they point to Glu being able to get back on track once again. 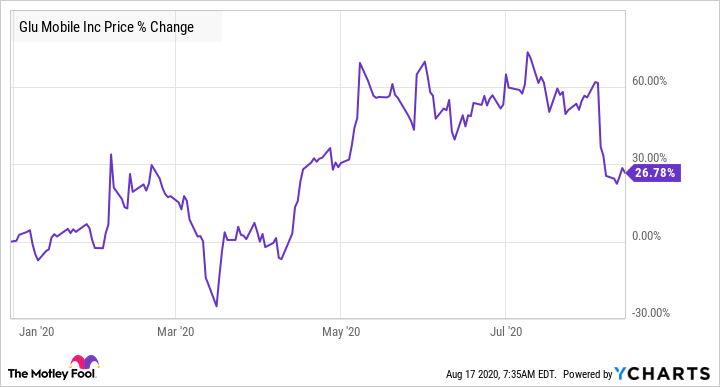 Glu's results weren't all that bad

Glu Mobile's revenue increased 40% year over year to $133.3 million in the quarter, falling short of the consensus estimate of $165.3 million. The company swung to a loss of $8.6 million from a profit of $2.5 million in the prior-year period. Its net loss of $0.05 per share fell woefully short of analysts' expectations for a profit of $0.08 per share.

Glu's loss can be attributed to the company's increased spending on user acquisition (UA), operating expenses, and commissions.

For instance, the company spent $57 million on UA and marketing during the quarter, which was nearly double the prior-year period's outlay of $30.1 million. Other operating expenses (excluding UA and marketing) increased 28% annually to $35.9 million. Platform commissions (which Glu pays to platforms such as Apple's and Google's app stores for hosting its games) increased by nearly 86% from the prior-year period, to $49.6 million.

The ramp-up in these expenses led to impressive growth in Glu's bookings during the quarter. Bookings is an important metric for the company as it is indicative of future revenue. An increase in this metric means that Glu's users have committed to spend more money, perhaps through a one-time purchase or through subscriptions. Bookings are recognized are revenue when the actual spending takes place.

The company exited the quarter with $182 million in bookings, a year-over-year increase of nearly 79%. Glu was originally expecting bookings between $162.5 million and $167.5 million during the quarter and it managed to exceed the higher end of that range significantly thanks to the launch of two new games: Diner DASH Adventures and Disney Sorcerer's Arena.

All this indicates that Glu went all out to woo more users during the quarter by spending more money on its games. The company's daily active users increased from 3.2 million a year ago to 3.8 million last quarter. More importantly, Glu witnessed a remarkable improvement in monetization as well. Its average bookings per daily active user jumped to $0.53 during the quarter from $0.35 a year ago.

Glu Mobile has consistently converted high portions of its bookings into actual revenue, with only a small percentage of users not spending the committed amount. Thus, the increased bookings guidance indicates that Glu's top line is on track for impressive growth once again.

Investors, however, may be disappointed by the fact that the company's actual revenue growth last quarter was only half of its bookings growth of 79%. But one should not forget that the company had originally expected 49% annual bookings growth (to a range of $150 million to $155 million). It increased its bookings guidance as Disney Sorcerer's Arena and Tap Sports Baseball 2020 (launched at the end of the first quarter) performed ahead of expectations.

So, it is likely that users committed to spending more money on these titles through the course of the quarter, and that led to a jump in bookings beyond original expectations. Glu management said on the latest earnings conference call that "increased bookings will be recognized over six months on average" when users are expected to spend the money that they have committed for virtual items.

Investors need to look at the bigger picture and not be discouraged by the speed bump Glu hit last quarter. The company delivered impressive revenue growth and expects things to improve in upcoming quarters, which is why investors holding on to this growth stock shouldn't panic just yet. It looks capable of regaining its mojo.