Like dividend stocks? These diverse winning REITs -- focused on marijuana to renewable energy to data centers -- are yielding up to 5.1%.

We're going to look at the seven best-performing real estate investment trust (REIT) stocks of 2020 through Dec. 17. Winners tend to keep winning in the stock market. That's largely because companies behind winning stocks often have a sustainable competitive advantage and a top management team that executes well. So this list is worth perusing if you're looking for a REIT stock to buy now.

REITs tend to pay attractive dividends. That's because in exchange for the special tax treatment they receive, they must distribute at least 90% of their taxable income each year as dividends to shareholders. Keep in mind that generally higher-yielding REITs are more volatile and risky than their lower-yielding counterparts. 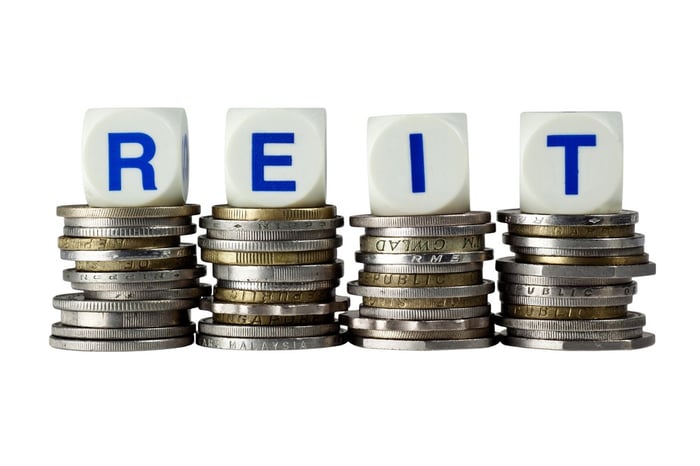 The 7 top-performing REIT stocks of 2020

To be included on the list, stocks had to have a market cap of at least $2 billion at the time of this writing (meaning they had to be at least mid-cap stocks). This criterion was included to screen out very small companies, which tend to be riskier investments. They also had to be publicly traded since at least the start of 2020.

Data sources: Yahoo! Finance and YCharts. EPS = earnings per share. *The company suspended the dividend on its common stock earlier this year. **Wall Street's consensus estimates. Over the long term, EPS growth tends to provide a decent indication of funds from operations (FFO) per share growth. FFO is a key metric for REITs, as it drives dividend changes. Data as of Dec. 17, 2020.

Four of the best-performing REIT stocks of 2020 (to 12/17) made my list of the six top performers in 2019: Innovative Industrial Properties, Hannon Armstrong, Safehold, and Equinix, which ranked Nos. 5, 4, 1, and 6 last year, respectively. The common denominator: All four fall into the specialized REIT category, rather than more traditional (and crowded) ones such as retail, residential, industrial, and healthcare.

Six of the seven winning 2020 REITs operate in niches. The exception is Taubman Centers (No. 5), a mall-focused retail REIT. But the only reason it made the cut is because its stock price rocketed in February following news of a pending acquisition by rival Simon Property Group. (The deal has recently been renegotiated, with the acquisition price cut by about 20% due to fallout from the COVID-19 pandemic.)

The No. 1 performer, Innovative Industrial Properties (or IIP), is the only publicly traded cannabis-focused REIT. It buys properties in U.S. states where medical marijuana is legal and primarily rents them to companies that grow or process cannabis. It continues to rapidly grow, with year-over-year revenue nearly tripling in the third quarter. The company was founded in 2016 and went public later that year.

Hannon Armstrong (No. 2) invests in climate change solutions, including renewable energy. It was founded in 1981 and went public in 2013.

Taking the bronze medal is Safehold, the first publicly traded company to buy, own, and capitalize ground net leases (GNLs). That is, it owns the land underlying commercial real estate projects. It was founded in 2016 and went public a year later.

Uniti (No. 4) is "focused on the acquisition and construction of mission-critical communications infrastructure such as fiber, wireless towers, and ground leases," according to its website.

Timber REIT PotlachDeltic rounds out the list of winners. It owns more than 1.8 million acres of timberland in six U.S. states and touts that it's one of the top 10 manufacturers of lumber in the country. It also operates a residential and commercial real estate development business.

I'll give myself a "B." In my article on 2019's REIT winners, I pointed conservative investors to Equinix -- and it's outperformed the S&P 500 by 38% in 2020, as of this writing. And I called risk-tolerant investors' attention to IIP, which has demolished the market. Investors who bought equal amounts of both of these stocks would be sitting on a 92% return so far in 2020 -- more than five times the broader market's return.

Why only a B? Because I expressed caution about Hannon Armstrong: "I'd be cautious about Hannon Armstrong given that its earnings growth is projected to average a paltry 4% annually over the next five years. That said, Wall Street's estimates are just that: estimates." Indeed, the stock's strong performance is likely in part due to the company easily beating analysts' profit expectations in the first three quarters of 2020.

Are any of these REITs worth buying in 2021?

Once again, I'm going for IIP and Equinix as the best REIT bets for risk-tolerant and conservative investors, respectively. Equinix's size provides stability and brings economies of scale. IIP looks even more attractive after the November election results expanded its market size. Ballot measures to legalize marijuana for medical use passed in Mississippi and South Dakota. (In addition, South Dakota and three other states gave the green light to legalize recreational marijuana.)

Hannon Armstrong still looks mighty pricey given its projected growth. That said, its recent string of earnings beats suggest that analysts might be underestimating its growth potential. For investors with a long-term focus, it could prove attractive. It's involved in a growing market and the U.S. political climate should be more favorable for it once Joe Biden becomes president. This will hold more true if the Democrats take control of the U.S. Senate by winning the two Georgia seats in the January runoff elections.

I'd pass on Taubman, Uniti, and PotlachDeltic. As to Taubman: Brick-and-mortar retail, particularly the mall space, is in a secular decline due to the rising popularity of online shopping. As to Uniti: Not only is its projected long-term earnings growth uninspiring, its earnings have fallen far short of Wall Street's expectations in at least the past four consecutive quarters. As to PotlachDeltic: This stock is largely a play on U.S. new construction, which means it promises to be volatile.

In short and generally speaking, investors should bet on winners and skip the bottom-fishing when it comes to REITs, in my opinion.

Is Innovative Industrial Properties the Dividend Growth Stock for You?