Rivian has taken the market by storm, but there are other good EV stocks too.

Rivian Automotive's (RIVN 7.54%) initial public offering (IPO) threw lighter fluid on the already scorching-hot electric vehicle (EV) industry. But zoom out, and Rivian is just the latest of several electric car stocks that are making a name for themselves on Wall Street.

There's no denying that putting all your eggs in just the Rivian basket leaves a lot of room for upside. But there's also a lot of advantages in picking multiple companies so that if one or two don't go well, you're not knocked out. Here's the case for Rivian alone, as well as for a basket of EV stocks. 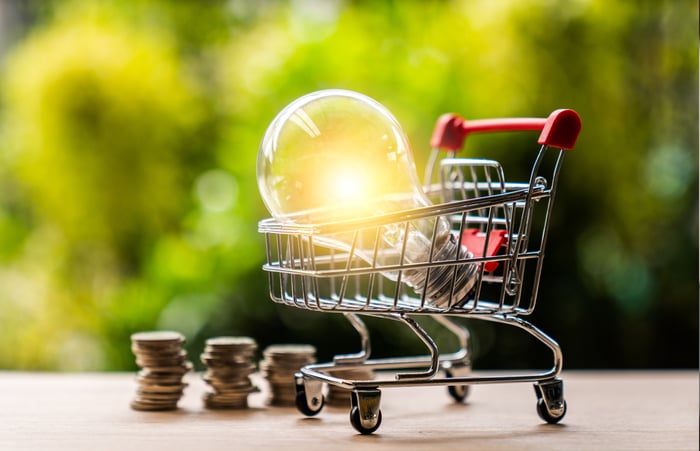 Sometimes there's nothing wrong with rolling the dice

Howard Smith (Rivian): Real investing isn't gambling. It isn't rolling the dice and hoping to score. Real investing means putting in the time to research, learn, and let a thesis play out. And planning for a long time frame to let it do so. The most successful investors don't jump in and out of the latest hot ideas. But there's also room for speculative plays in a portfolio. Maybe even just to squelch that gambling urge.

Now a company has gone public with the opportunity to become that winning gamble for investors. Sure, Rivian is way overvalued by traditional metrics. And with an initial pop from its IPO price of $78 per share, it doesn't seem like a good time to buy in. But that pop has faded some, and an argument can be made that investment money intended for the speculative EV sector could be put to good use with Rivian shares.

The basket approach that my colleague Daniel supports makes a ton of sense. It lowers the risk and offers more opportunities to have a stake in a winner in a burgeoning sector. But Rivian is an intriguing play that has some unique advantages for investors. It didn't go public when it was just an idea on paper. The company has produced electric delivery vans for Amazon -- one of its largest investors -- that are already being road-tested. It has other big investors from the automotive industry that can provide both support and direction as it grows.

Rivian also plans to use its EV platform for a pickup truck and an SUV model in addition to the commercial fleet vans. For now, Amazon has ordered 100,000 of those vans as it executes its plan to achieve net-zero carbon emissions by 2040. The plan is to have 10,000 of the Rivian vehicles in service in 2022, with all 100,000 by 2030.

Rivian won't grow into its current valuation with Amazon as its only customer. The R1T and R1S truck and SUV will also have to be successful with consumers. But speculative investments, by definition, are done with money you're willing and able to lose without consequence. Now that retail investors are able to join Amazon and other big names in the auto industry with an investment in Rivian, it may be the one to put into that speculative portion of your portfolio.

Give yourself more chances to win big

Daniel Foelber (A basket of eight stocks): Howard makes a good case for Rivian. But going all-in on one unproven and arguably expensive name isn't a viable option for most investors, even risk-tolerant ones.

A better option could be to invest in the EV industry through a basket of five to 10 different names -- and Rivian can even be one of them.

Investors now have access to a swath of automakers, tech companies, and infrastructure companies that they can buy. The industry is undoubtedly growing, but the main reason it may "look" suddenly more mature than just a few years ago is that many of these companies have been able to access funding and go public.

Companies like Lucid Group (LCID -0.51%) and ChargePoint (CHPT 3.76%) have been stories in the making for over a decade. Their growth is accelerating, but that's largely due to years and years of development and access to billions of dollars in capital.

Like Rivian, Lucid is an up-and-coming EV maker. But what sets it apart from Rivian is its industry-leading technology -- namely an incredibly efficient battery pack that has allowed Lucid to have the highest range offering in the market. Chinese EV maker Nio (NIO 0.42%) is also an exciting automaker that is a technological leader in its own right.

A couple more names that could be worth adding to the basket are General Motors (GM 8.35%) and Ford (F 4.81%). Both legacy automakers recognize the need to diversify their revenue streams by including EVs. GM was an early EV adopter and continues to challenge the lower-end EV price range. Ford is making big moves in the electric truck market through the F-150 Lightning, and the SUV market with the Mustang Mach-E.

Finally, a tech play like QuantumScape (QS 5.98%) could be a nice cherry on top of a basket of good companies. The stock price has come down a lot, but the battery company is making strides in its manufacturing process.

Add it all up and that gives you five automakers, a pick-and-shovel play in ChargePoint, and a battery-tech play in QuantumScape. Tesla (TSLA 3.94%) would be a good eighth company not just because it's the industry leader, but because its high-margin energy business and existing charging infrastructure rounds out the basket nicely.

A growing industry that's still in the early innings

Rivian is the newest member of a cohort of exciting EV automakers. When looking 10 or 20 years into the future, it's easy to see how the car and mobility industry could become a lot different. That includes a complete shake-up of which companies hold the majority market share. Some legacy automakers like Ford and GM are well-positioned to succeed, while others may be slow to change and see some of their market share gobbled up by today's newcomers. Whether you like Rivian or a basket of EV stocks, both contributors think the EV industry is a great place to invest for the long term.

Why Rivian and Lucid Stocks Dropped, but Canoo Soared Today
395%