Rivian is in the spotlight, but there are other EV companies with just as much upside.

Rivian Automotive (RIVN -4.69%) has taken the stock market by storm as investors flock to electric vehicle (EV) companies in search of growth. Yet as hot as Rivian is, it's important to remember that there are other, more proven EV companies making a name for themselves in this exciting industry. 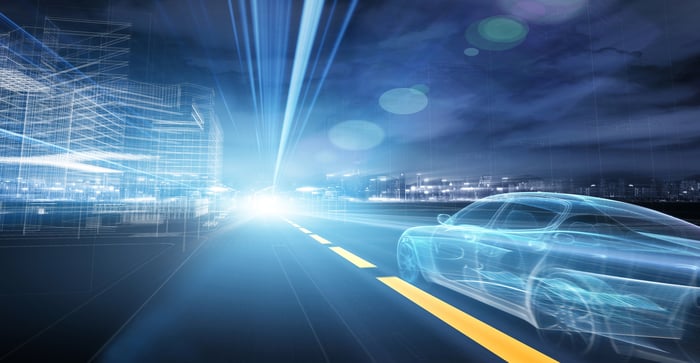 Lucid is quickly turning into a market leader

Daniel Foelber (Lucid Group): Lucid reported its first quarter as a public company on Monday. While its paltry $232,000 revenue number may look bad, the real story is the company's reservations, global expansion, ongoing deliveries, rave reviews, and a defined path toward even greater success.

Reservations are now up to 17,000 compared to 9,000 in May. When asked about marketing, the company remained committed to its direct-to-consumer strategy centered around showrooms and online sales, not the traditional franchise and dealership model. The idea is to allocate capital toward manufacturing, innovation, and design and let the brand do the talking. So far, the strategy is working well. Lucid now has 16 North American studios and service centers, including one in Vancouver. In July, Lucid set a goal to open 20 showrooms and service centers by 2021 year-end.

Lucid continues to progress on its target to deliver 520 custom-designed Lucid Air Dream Edition vehicles before beginning production of the Grand Touring, the second most expensive of the four intended Air sedan trims.

Lucid has fetched its fair share of glowing reviews from multiple publications. On Nov. 15, it announced that Motor Trend had awarded it the 2022 car of the year award, which isn't too surprising considering Motor Trend's Jonny Lieberman test drove the Lucid Air Dream Edition Range in September and gave it a favorable review. To get the award, Lucid had to beat 24 other vehicles in the six categories of efficiency, value, advancement in design, engineering excellence, safety, and performance.

Expectations are high for Lucid in 2022, but it is confident it can produce and deliver 20,000 Lucid Airs, expand its production capacity, and advance toward rolling out its electric SUV, the Lucid Gravity.

As competition in the EV space intensifies, Lucid's technological edge should prove a long-term advantage. The company designs and develops its battery pack, motor, inverter, and entire electric powertrain in-house. It has also reiterated its intention to keep a watchful eye over its design and production process, even as it expands into Saudi Arabia and China. In sum, Lucid is doing just about everything it said it was going to do on time. Making good on promises is critical for an up-and-coming company that doesn't expect to be profitable for a few more years.

Howard Smith (Nio): Lucid isn't the only popular EV maker with a new luxury sedan. To be precise, Nio's ET7 will become available in a few months, but there seems to be as much anticipation for it as there was for the Lucid Air launch. The one big difference, of course, is that Nio has been selling its electric SUVs since the spring of 2018, and has now delivered almost 150,000 vehicles in total. Lucid just delivered its first car less than three weeks ago.

Lucid's CEO and chief technology officer (CTO) Peter Rawlinson believes his company will succeed thanks to its technological advantages. But Nio is an EV technology leader in its own right. The ET7 will be available with an upgraded 150 kWh battery pack that the company says will provide a range of over 600 miles. That exceeds the U.S.-leading EPA rating of 520 miles for Lucid's long-range sedan. Nio also offers its customers the use of battery swap stations where the company says it takes only three minutes to swap a fully charged battery. This service eliminates the need to wait for a charge is also being rolled out in Norway, Nio's first export market.

Nio is already selling its SUVs in Norway, and it plans to expand into Europe through Germany next year. It's also possible that Nio will eventually bring its business to the U.S., which Barron's reported earlier this year. Wherever its business grows, Nio is already expanding to prepare for it. The company recently renewed the agreement with its manufacturing partner and is expanding its production facility to more than double capacity as part of that agreement which extends into May 2024.

Nio shares aren't cheap by traditional valuation metrics. But its $66 billion market cap isn't as expensive as Lucid at $90 billion, and Nio is getting closer to profitability. Lucid may be off to a great start, but it has a much further road to profitability and operational success. That makes Nio the better buy today.

The EV industry is just getting started

Despite conflicting opinions on whether Lucid or Nio is the better buy, there's no denying that electric car companies present an excellent cohort that's bursting with potential. State and federal climate objectives, as well as many corporate goals to achieve carbon neutrality pair well with a consumer base that is increasingly looking toward eco-friendly options.

In investing, being roughly right is usually good enough. Considering both Lucid and Nio in a basket of multiple EV stocks could be the best option for investors looking to limit the downside exposure associated with allocating too much capital to a single individual stock.