Tesla has the gold, but a tight race is heating up for the American EV industry's silver medalist.

The race for electric vehicle (EV) stardom is intensifying. New players are hitting the scene with impressive technology that rivals that of legacy automakers and even the undisputed EV kingpin, Tesla (TSLA 0.91%).

Rivian Automotive (RIVN -4.69%) had its initial public offering (IPO) last week and is capturing the spotlight for its truck and delivery van products. It's already the second most valuable U.S. automaker. Close behind is Lucid Group (LCID -3.73%), which has seen its stock price more than double over the last month.

Here, we'll weigh the pros and cons of each electric vehicle company to evaluate which is the better buy now. 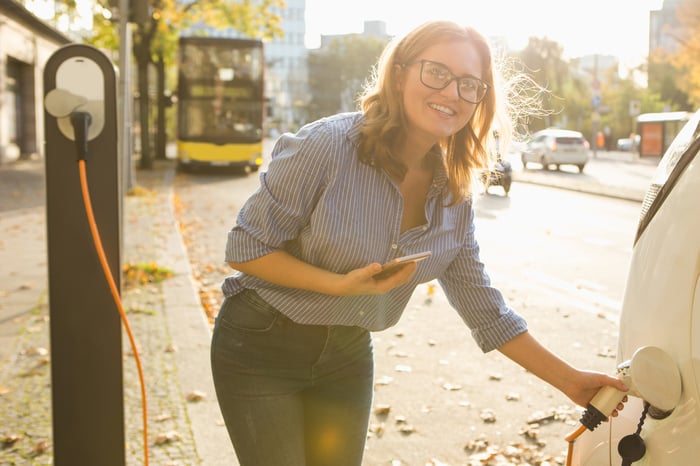 Surround yourself with the knowledge to succeed

Howard Smith (Rivian): A great manager doesn't need to be the smartest person in the room. They just need to create a team who are the best at what they do. That seems to be part of the approach Rivian took as it built itself into an EV manufacturer. The company didn't just raise billions in capital prior to its IPO last week, it took on some talented partners in some of those investors. That includes Amazon (AMZN -8.43%), Ford (F -7.61%), and privately held Cox Automotive.

Lucid may have an experienced automotive leader in Peter Rawlinson, but Rivian's R.J. Scaringe seems to know what he doesn't know. In a letter to prospective investors and customers, Scaringe acknowledged his lack of automotive experience saying, "The challenge is as big as it comes but we're fortunate to get to help solve it with such passionate team members and partners."

And those partners aren't just there for support, they are bringing business and operational services. Though subject to change, Amazon currently has 100,000 EVs on order from Rivian for its fleet of commercial delivery vans. And Cox Automotive plans to provide logistics and service support for Rivian vehicles. Cox also recently acquired a leading service provider for recycling and repurposing EV batteries.

Comparing Rivian to Lucid right now isn't about current valuation, it's about future potential. Neither have any meaningful revenue right now. But Rivian is setting itself up with a more diverse offering including a pickup truck and utility vehicle on its R1 platform, in addition to the Amazon delivery vehicles. It raised an additional $12 billion from its IPO, and as of the end of October, the company said it had approximately 55,400 pickup (R1T) and SUV (R1S) preorders in the U.S. and Canada. Those can be canceled, but there's obvious initial interest even beyond Amazon. Lucid is focusing on luxury sedans, at least for now. Both companies may be successful over the long term, but right now Rivian knows it has a reliable customer and several helpful partners, too.

Lucid has a reputation for delivering on its promises

Daniel Foelber (Lucid Motors): Lucid Motors and Rivan aren't really competitors, as Lucid is targeting the luxury sedan market and Rivian is in the business of selling recreation and lifestyle trucks and delivery vans. But investors interested in Rivian can learn a lot from Lucid's first year as a public company.

Before completing its merger with Churchill Capital IV, a special purpose acquisition company (SPAC), on July 23, Lucid had yet to raise the cash it needed to fund its 2022 operations. What followed was a long list of events that compounded to give Lucid a reputation for delivering on its promises.

Lucid set the goal to begin mass production and delivery of its Lucid Air Dream Edition luxury sedan in the second half of 2021. It also made the goal to achieve top ratings from the Environmental Protection Agency (EPA) in both horsepower and a range above 500 miles. Lucid achieved its goals. And in the company's Q3 earnings call from Monday (which was its first as a public company) all signs pointed to more promises being met.

A key detail from the conference call was management's commentary on the mix of Lucid Airs that have been reserved. A big question mark for months now was whether the majority of reservations were lower-priced Lucid Air Pure cars, which the company is unlikely to produce until the end of 2022. The issue is that if a lot of reservations weren't Lucid's higher-end trims, then the company would risk having a backlog of cars it can't yet make, and an inventory of higher-end cars it can't sell. This is because Lucid is scaling production in descending order of price to capture higher margins and lower production volumes from its expensive trims before transitioning to lower margins and higher volumes from the less-expensive trims.

Specifically, Lucid commented that its 13,000 reservations presented potential revenues of $1.3 billion, or roughly $100,000 per vehicle, representing the midpoint of the four trims. This healthy mix means that Lucid shouldn't have an issue with demand in 2022.

What I like about Lucid is that the story is playing out as planned. The company has the cash, the skilled management, and a clear path toward success. Communication is key, and Lucid has given investors specific goals to follow, knowing full well that if it fails to deliver or is delayed, then there may be a negative reaction.

While we may differ on which EV company deserves to take the silver behind Tesla, we both agree that Rivian and Lucid have incredible growth prospects and paradigm-disrupting potential. However, both Rivian and Lucid are expensive stocks and are likely to face volatility as each company works toward mass production and one day becoming profitable.

For the reasons discussed, Rivian and Lucid are very different companies who are likely to appeal to different kinds of investors. If investors are unsure about  which one to buy, it's perfectly fine to wait to see how things develop with time. It's also OK to choose a basket of EV stocks, such as Rivian, Lucid, and others to diversify risk and capture the upside of different EV markets.

4 Stocks to Avoid in February