The best women chief executive officers (CEOs) have shown their skill at reshaping work cultures, promoting sustainability, implementing turnarounds, and adding profits to the bottom line -- all while blazing trails and breaking barriers.

Women CEOs may be small in number, but they are mighty in influence. Here's a look at 10 women leaders who are proving that gender is not a barrier to success. 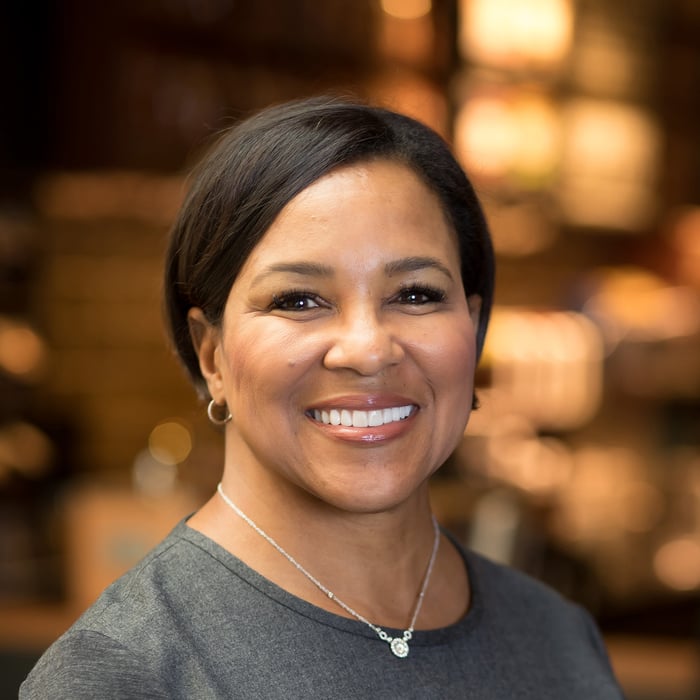 When Walgreens announced in January 2021 that Rosalind Brewer would take over as CEO, the company's share price jumped 8% in after-hours trading. Brewer formerly served as COO, a group president, and a board member for Starbucks (NASDAQ:SBUX).

When Brewer took the helm of Walgreens in March 2021, she became the only Black woman CEO of an S&P 500 and Fortune 500 company. Before Brewer, only two other Black women -- Ursula Burns, former CEO of Xerox (NASDAQ:XRX), and Mary Winston, former interim CEO of Bed Bath & Beyond (NASDAQ:BBBY) -- had served as CEOs of S&P 500 companies.

This wasn't the only time Brewer had broken demographic barriers. Before her tenure at Starbucks, she was the president and CEO of Sam's Club. That made her the first woman and first Black woman to run a division of Walmart (NYSE:WMT).

Brewer has served on the boards of directors of Amazon (NASDAQ:AMZN), Lockheed Martin (NYSE:LMT), and Molson Coors (NYSE:TAP). She also chairs the board of trustees at Spelman College.

Brewer is ranked sixth on Fortune's 2021 list of most powerful women in business .

Mary Barra has held the CEO post at General Motors since 2014 and has chaired the company's board since 2016.

Barra began her career at GM in 1980 while she was still in college. Over the next several decades, she climbed GM's corporate ladder, collecting an MBA from Stanford along the way.

Barra is spearheading GM's transition to electric vehicles and driverless cars. In 2016, GM launched the Chevrolet Bolt, the industry's first all-electric vehicle priced at less than $40,000. In the same year, she oversaw the acquisition of Cruise, a self-driving, all-electric shared car service. One year later, GM acquired Strobe, a company that makes the laser sensors used in driverless vehicles.

In 2021, Barra announced GM's plans to phase out internal combustion engines and manufacture only electric cars by 2035. She's also promised that GM will be carbon-neutral at all facilities globally by 2040.

Barra also serves on the boards of Disney (NYSE:DIS), Duke University, and the Detroit Economic Club.

In 2021, Fortune ranked Barra fifth on its list of most powerful women in business. 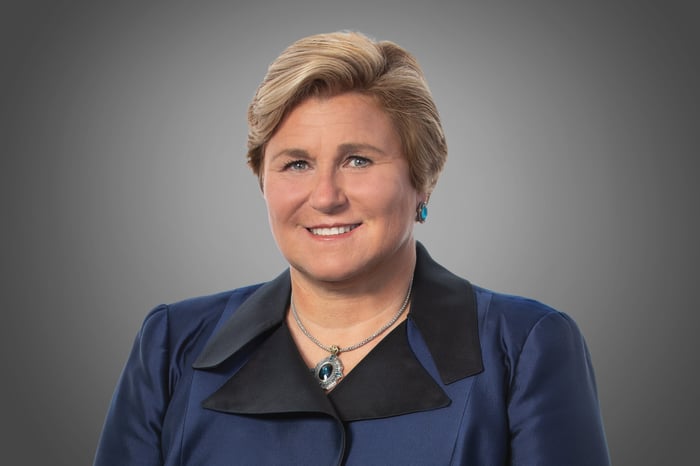 Gail Koziara Boudreaux is president and CEO of healthcare company Anthem. Boudreaux came into the top role at Anthem in 2017 after establishing herself as a proven leader in the healthcare space. She's held executive leadership roles at UnitedHealth Group (NYSE:UNH), UnitedHealthcare, and GKB Global Health (NYSE:GSK) since 2008.

Boudreaux also serves on Target's (NYSE:TGT) board of directors.

In 2021, Fortune ranked Boudreaux the seventh most powerful woman in business.

Duckett is the third Black woman to serve as a full-time CEO of a Fortune 500 company after Brewer of Walgreens and Winston of Bed Bath & Beyond.

Before her CEO appointment at TIAA in 2021, Duckett was already recognized as a highly skilled Black executive in financial services. Her previous roles included CEO of Chase Consumer Banking and CEO of Chase Auto Finance.

Throughout her career, Duckett has led efforts to broaden financial and career opportunities for Blacks and women. She has held key leadership roles for JPMorgan Chase's (NYSE:JPM) Advancing Black Pathways Program, The Fellowship Initiative, and its Women on the Move program.

She also founded the Otis and Rosie Brown Foundation, named after her parents. The foundation recognizes people and organizations that find simple ways to enrich families and their communities.

In 2021, Duckett was Fortune's 10th most powerful woman in business.

Under Catz's leadership, Oracle has grown through an aggressive acquisition strategy. She helped to close more than 130 transactions, including the $10.3 billion takeover of PeopleSoft in 2005, when Catz was Oracle's president.

More recently, Catz has led Oracle in its shift from legacy hardware businesses to faster-growing cloud computing and infrastructure offerings.

Before working at General Dynamics, Novakovic worked in the government sector for the secretary of defense, Office of Management and Budget, and the Central Intelligence Agency.

General Dynamics' stock price has more than doubled under Novakovic's leadership. That growth was boosted in 2018 when Novakovic led the company in the strategic acquisition of IT firm CSRA for $9.8 billion.

In 2021, Equilar reported that Novakovic's compensation of $18 million made her the 34th-highest paid CEO of any gender among the largest U.S. companies by revenue. She is 20th on Fortune's list of most powerful women in business. 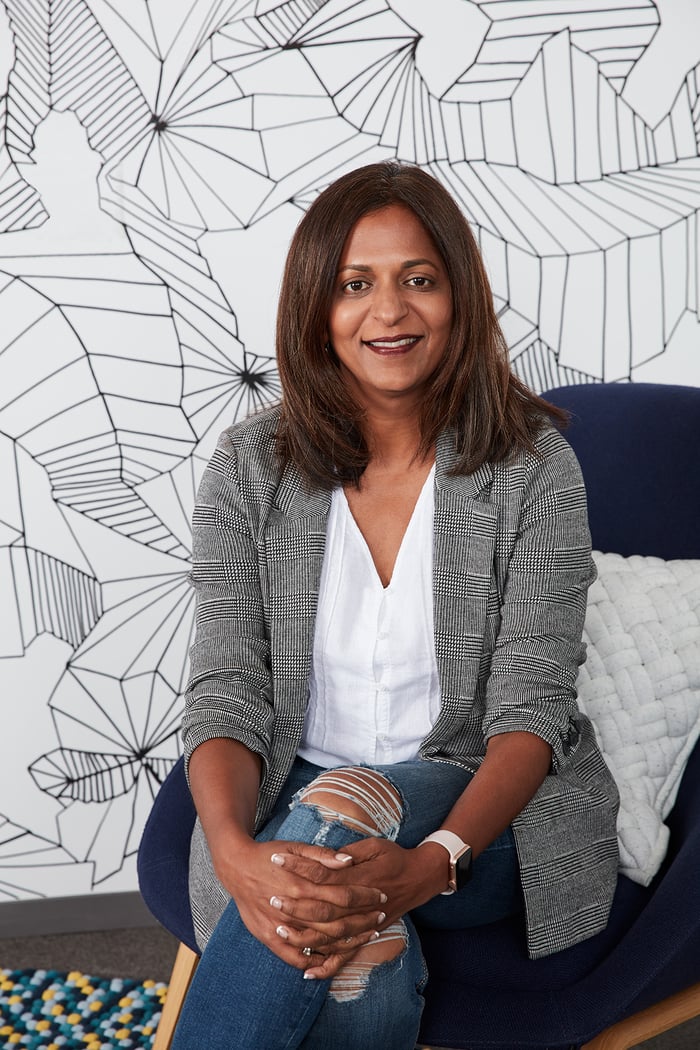 When clothing retailer Gap announced in March 2020 that Sonia Syngal would step in as CEO, the company's share price jumped in after-hours trading. And for good reason: Between 2016 and 2020, Syngal guided Gap's Old Navy business to a $1 billion increase in sales.

Syngal first joined Gap in 2004 and held several leadership roles within the organization. Before taking charge at Old Navy, she managed Gap's global supply chain and streamlined the product-to-market process for all Gap brands. She was also the managing director of Gap's European operations and a senior vice president of the company's international division.

Fortune ranked Syngal the 35th most powerful woman in business in 2021.

Lynsi Snyder became the president and CEO of In-N-Out Burger in 2010 when she was 27 years old. As the sole living heir to the burger empire, she quickly became one of the wealthiest and most famous woman CEOs. She has since proved her place among the country's most respected and effective business leaders.

Under Snyder's direction, the burger chain expanded into Texas and Colorado, increasing from 215 locations to more than 370. She intentionally kept the expansion pace slow to preserve the authenticity of the In-N-Out experience. It's estimated that Snyder has increased the company's value from $500 million in 2010 to more than $3 billion today.

In 2019, Glassdoor named Snyder the highest-rated woman CEO, the top-rated restaurant CEO, and the third-best CEO across all categories. In 2021, she retained her 99% approval rating and was ranked 20th-best CEO in North America and parts of Europe. 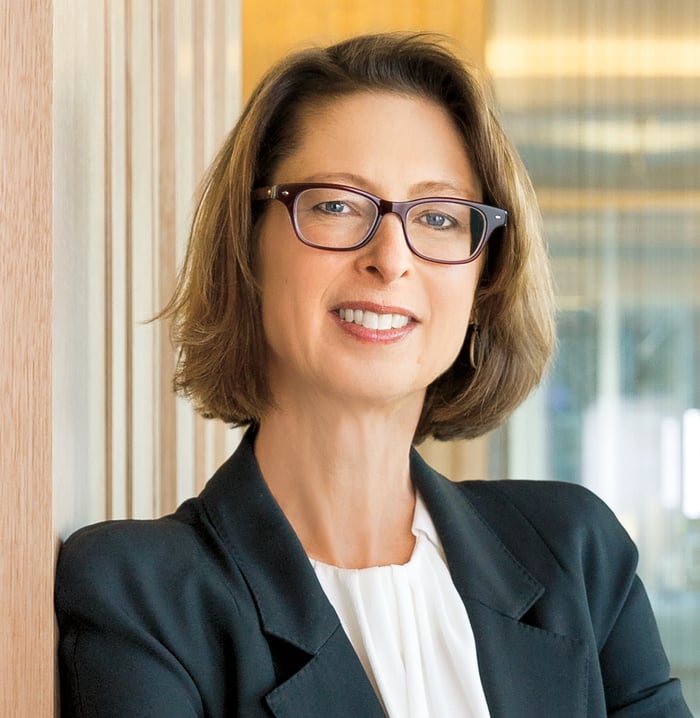 Abigail Johnson is chairwoman of the board and CEO of the privately owned brokerage firm Fidelity Investments. She is sixth on Forbes' list of the world's most powerful women -- beating out Oprah, Queen Elizabeth II, and Beyonce.

Johnson assumed the helm at Fidelity in 2014, replacing her father, Ned Johnson III. She added chairwoman to her title in 2016.

Johnson had been marching toward the C-suite at her family's company for years. She worked part-time at Fidelity in college, joining the ranks full-time in 1988 as an analyst after receiving an MBA from Harvard. In 2001, Johnson became president of the Asset Management division, where she managed mutual funds. She would later play key roles in Fidelity's growth and capital appreciation groups, as well as the retail, workplace, and institutional businesses.

With Johnson in charge, Fidelity has launched an institutional trading platform for cryptocurrencies and the industry's first zero-expense-ratio mutual funds for individual investors. Fidelity has also maintained its position as a leading provider of individual retirement accounts (IRAs) and 401(k)s for U.S. companies.

Martine Rothblatt, Ph.D, J.D., is the chairwoman and CEO of United Therapeutics. She started the company to develop treatments to save her daughter's life. Rothblatt is also a co-founder of Sirius XM Radio (NASDAQ:SIRI) and has served as CEO of Sirius and CEO of satellite communications company GeoStar.

Rothblatt has taken United Therapeutics from an idea to a $8.6 billion business. The company develops therapies for pulmonary arterial hypertension and pediatric neuroblastoma. United Therapeutics is also developing a manufacturing process for personalized human lungs using 3D printing and the patient's own cells.