Why the big day? A combination of factors, including Wall Street analyst upgrades, optimism that Congress could reach a deal on stimulus, and high hopes as earnings season gets under way -- not to mention a couple of big events coming up for Apple and Amazon. Shares of auto giant Ford (F 0.36%) joined Apple in pacing the S&P, following an analyst upgrade. 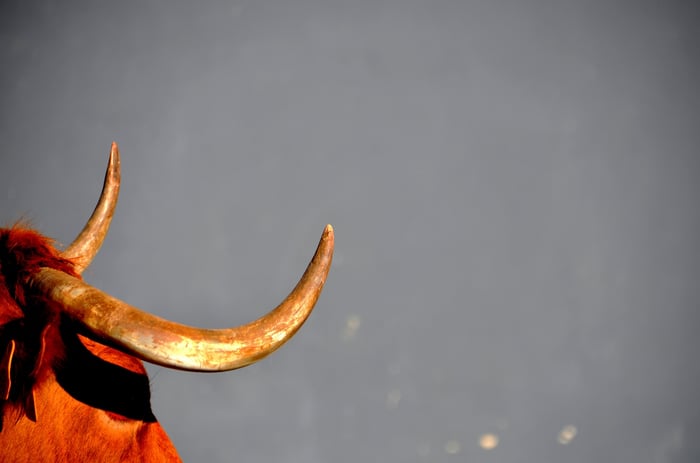 Tech stocks peaked as a group in early September, when the S&P 500 reached an all-time high. Over the three weeks that followed, the index would fall almost 10%, with tech stocks falling by far the most. All four tech giants above fell more than 15% over the next three weeks: 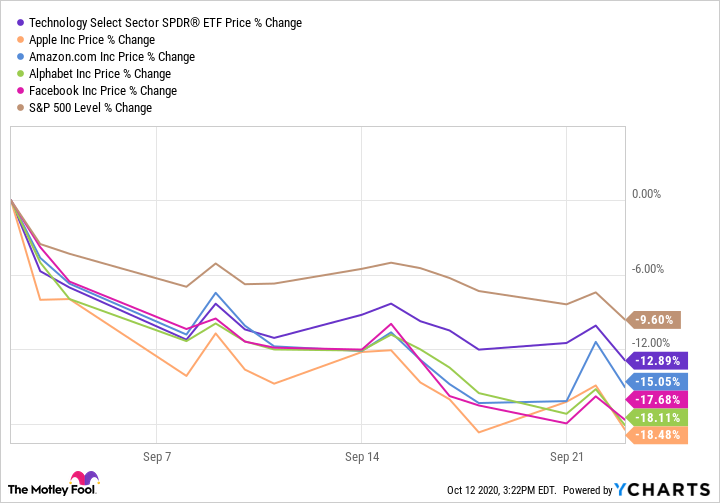 But since Sept. 23, these same stocks have shown some life, gaining back a good portion of those losses, all up more than 11% in the past two-plus weeks.

Today's big gains are the product of a few things. For Apple, the combination of an analyst upgrade and very high hopes ahead of Apple's iPhone event tomorrow has investors coming back to the tech giant en masse. Today's gains push Apple's market cap back to the $2 trillion mark.

Amazon's big day isn't quite as obvious. An Amazon supplier did get an upgrade today, largely on the prospects for Amazon to drive growth, but there's likely a lot of anticipation ahead of the much anticipated Prime Day sales event, which kicks off later this week.

But by and large, today was just a big day for investors who are hopeful of a strong earnings season and expect tech stocks will continue to offer the best prospects going forward, no matter what happens with the economy, the upcoming election, and the coronavirus pandemic that continues to cast a global shadow.

Ford gets a boost

It's been a tough few years for Ford, and a brutal 2020. Despite still delivering solid cash flows prior to the coronavirus pandemic, Ford has spent the past several years struggling to revamp its business in much of the world. Enter 2020, and even its vaunted dividend -- which was put on ice for the foreseeable future -- wasn't enough to make it worth owning for many investors.

But Michael Ward at Benchmark says it's time to buy shares of the Blue Oval, setting a share price of $10 along with raising his rating. Shares jumped more than 5% on the news, but if Ward is right that Ford's recently results should start improving, that Jim Farley was the right pick as CEO, and Ford's new products are moving the right direction, then today's closing price, below $8 per share, represents a great value.

We are officially into earnings season, and this week is dominated by the biggest of the big banks. The "Big Four" of JPMorgan Chase (JPM 0.19%), Bank of America (BAC 0.24%), Citigroup (C 0.10%), and Wells Fargo (WFC 0.23%) all report quarterly results this week, along with investment banking giant Goldman Sachs (GS 0.68%).

In addition to understanding their results on an individual basis, no other group of companies can offer as much insight into the current and near-term prospects for the economy. Banks are tied to every aspect of the consumer economy, housing, commercial and industrial real estate, and every category of lending. Investors would do well to pay attention when the Big Four, plus investment banking giant Goldman, report to investors over the next four days.

Has the S&P 500 Outperformed Its Historical Gains in the 21st Century? You Might Be Surprised