Three Fool.com contributors give their thoughts on who the winners on Wall Street will be after the election.

After more than a year of campaigning and seemingly millions of robocalls, the United States goes to the polls this Tuesday.

Elections, as they say, have consequences, and investors understandably are focused on what happens on Tuesday and what it will mean for their portfolios.

To be clear, we at The Motley Fool advocate for investing for the long-term and picking stocks that will generate strong returns for much longer than one presidential cycle.

But for those looking for investment ideas tied to the upcoming election, here's why we believe ManTech International (MANT), Ford Motor (F -2.86%), and Huntington Ingalls Industries (HII -0.71%) are three stocks to buy. 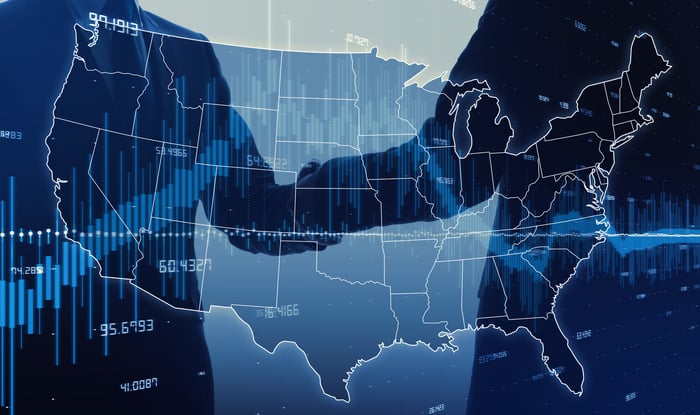 Bet on government IT to survive budget battles

Lou Whiteman (ManTech): Defense stocks have underperformed this year, largely because of election concerns. The SPADE Defense Index is off 21% year to date, losing to the S&P 500 by 20 percentage points. Government services companies, specialists that focus on running IT systems and assuming other outsourced tasks, have done far worse than more traditional defense contractors that build fighters, tanks, and ships.

The stocks are down because the last time there was gridlock in Washington it led to sequestration, which cut Pentagon spending. This time around it could be worse due to the large unexpected outlays the government has paid to fight COVID-19, leaving Washington with only a limited amount to spend.

I think the concerns are overdone, as both presidential candidates have committed to defense spending. And while government services did feel the bulk of the pain last decade when cuts happened, that neglect helped contribute to IT snafus including the Edward Snowden incident. Officials tend to overcorrect after mistakes, and given the recent emphasis on nation state hacking and IT security I believe it is unlikely the government's current tech modernization is derailed this time around.

The Pentagon also doesn't have the same amount of foreign military activity to fund this time.

There are a handful of beaten-down government IT companies I think are poised to outperform, but ManTech is my top pick because it offers a lot of ways to win. Its top-secret-heavy portfolio should hold up better than more-commoditized IT providers.

ManTech also has a strong balance sheet and should be able to do deals to take advantage of valuation discounts due to these worries. And the company, with an enterprise value of $3.19 billion and a well-performing business, would be an enticing mid-sized target for some of the larger companies in the business.

Company co-founder George Pedersen ran ManTech for five decades, and during that time the assumption was ManTech was not for sale. But Pedersen gave up the CEO role in 2018 and in September transitioned from executive chairman of the board to chairman emeritus.

ManTech doesn't need to be acquired for investors to win, but I like the number of different ways for the stock to propel higher.

Why this all-American icon is a good buy now

John Rosevear (Ford Motor Company): Ford's stock has been sinking for years now, along with, it must be said, its profit margins. While General Motors has jumped from strength to strength, and Tesla has done the Tesla thing, Ford has looked, well, low on gas.

So why buy Ford now? Things are looking up.

New CEO Jim Farley represents a big change from his predecessor, the now-retired Jim Hackett. While the professorial Hackett was admired inside Ford, he often had trouble communicating his vision for the company to people outside -- particularly auto investors and Wall Street analysts. Not surprisingly, investors looked elsewhere. Ford's all-new 2021 F-150 is just one of several important new products due over the next few quarters. It'll be out by the end of 2020. Image source: Ford Motor Company.

But that is changing -- in fact, it has already changed. Farley, a longtime Ford executive who took over the top job on Oct. 1, made a strong positive impression during Wednesday's earnings call. Among other things, Farley spoke clearly about his near-term vision for Ford, and promised to present a comprehensive update on the company's longer-term strategy next spring.

Ford's third-quarter results were surprisingly strong, but it's still a big automaker in a recession, and sales are likely to be only so-so until the COVID-19 pandemic recedes. That said, recessions can be a great time to buy cyclical stocks like automakers, as auto sales tend to be a leading indicator -- they, and automakers' profits, tend to jump early in economic recoveries.

I don't know when this recession is going to end, of course. But I do know that Ford, with plenty of cash in the bank and a slew of new products on the way over the next few quarters, is likely to be in a great position to benefit when the economy turns back up. I think it's a good bet that investors holding Ford stock (I'm one) will benefit as well.

Whoever wins in the White House, America will still need a Navy

Rich Smith (Huntington Ingalls): For four long years, President Donald Trump has been promising to build a 355-ship Navy for America. As his second term winds down, though, the number of ships on the Navy's "Battle Forces" register remains below 300 -- and only 253 of those are active in commission. Clearly, we still have a ways to go before America's Navy is up to snuff, and that means that whoever wins the White House next week, the U.S. Navy is going to have to keep buying warships.

One of only two or three companies remaining that are capable of building large warships for the Navy (General Dynamics and sometimes Lockheed Martin are the two others), Huntington Ingalls' fortunes are inextricably tied to the Navy's expansion plans -- and a Navy that needs to grow by another 40%, I'd argue, is a Navy that will be expanding for years, no matter who sits in the Oval Office.

Even assuming I'm right about that, though, why choose to invest in Huntington Ingalls instead of General Dynamics or Lockheed Martin?

Mainly, I base my decision on valuation. At 11.5 times trailing earnings, Huntington Ingalls stock is more of a bargain than General Dynamics (12.1 times earnings), and it's much cheaper than Lockheed Martin (15.6 times). The disparity in valuations gets even clearer when you compare stock prices to sales. Here, Lockheed Martin is once again the most expensive stock of the group, selling for a price-to-sales ratio of 1.6. General Dynamics looks significantly better at just a little over one times sales -- very close to the usual, historical average valuations for defense stocks.

At a valuation of less than 0.7 times sales, however, Huntington Ingalls is far and away the cheapest defense stock of the group -- and my favorite to outperform the market regardless of who wins Election 2020.