Aurinia Pharmaceuticals and Axsome Therapeutics are two names that growth investors should have on their radars right now.

Biotech stocks have been on a wild ride in 2021. Thanks to a spate of surprise rejections by the Food and Drug Administration, an increasingly politicized regulatory landscape for COVID-19 vaccines, and widespread profit-taking in response to the industry's strong 2020, the SPDR S&P Biotech ETF initially lost over 12% of its value during the first six months of 2021.

However, this closely watched biotech ETF quickly sprang back to life last month in the wake of Pfizer's decision to buy cancer specialist Trillium Therapeutics. This early-stage buyout was widely regarded by investors as a positive sign that merger and acquisition activity within the industry could soon pick up in a big way, a central theme that ought to provide a much-needed boost for biotech valuations for the remainder of the year. 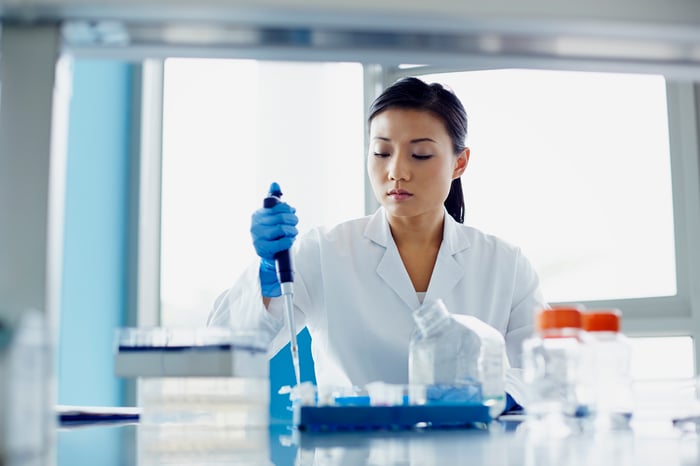 Which biotech stocks are poised to ride this wave higher? Aurinia Pharmaceuticals (AUPH -0.68%) and Axsome Therapeutics (AXSM -2.42%) are both positioned for a strong finish to the year. Here's what potential investors need to know right now.

Aurinia's core value proposition is its lupus nephritis (LN) medication known as Lupkynis. The drug is geared toward an underserved market estimated at approximately 100,000 U.S. adults with LN, which causes inflammation of the kidneys. What's particularly exciting about this mid-cap biotech stock is that Lupkynis only has to capture around 16% of its target market in the U.S. to achieve blockbuster status.

Keeping with this theme, Lupkynis is presently on track to possibly surpass $1 billion in sales by the end of 2024, based on its super early run rate after roughly two quarters on the market. Moreover, there's a real chance that this novel LN drug could haul in somewhere around $1.9 billion by the middle of the decade, even after accounting for competition from GlaxoSmithKline's injected LN drug Benlysta.

What does this all mean? Aurinia's market cap currently stands at right around $3 billion, which translates to $23.51 a share. That's a respectable valuation for a company expected to bring in between $40 million to $50 million in revenue this year, according to the company's own forecast.

But a longer-term view suggests that Aurinia's shares could be worth upward of at least $50 within two to three years' time, assuming this $1.9 billion sales estimate proves correct. What's more, there is a distinct possibility that this novel LN drug could make Aurinia an attractive bolt-on acquisition for a number of cash-rich big pharmas.

All told, Aurinia's growth story is only starting to unfold given that Lupkynis' commercial launch is just getting underway. Aggressive investors, therefore, might want to take advantage of this rapidly emerging trend soon.

Axsome: Multiple irons in the fire

Wall Street thinks that shares of Axsome Therapeutics, a specialist in disorders of the central nervous system (CNS), could jump by as much as 161% over the next 12 months. The reason: Axsome has two high-value drugs -- AXS-05 for major depressive disorder and AXS-07 for migraine headache -- under review by the FDA right now.

Analysts have estimated that AXS-05 alone could rake in sales in excess of $1.3 billion, while AXS-07 might be able to generate a respectable $300 million in sales at peak. The bad news is that AXS-05 doesn't look like it will get approved during this ongoing review cycle (although an approval isn't totally out of the realm of possibility), and investors will have to wait until April 30, 2022, to learn about the FDA's decision on AXS-07.

But patience could pay off in a big way for investors when it comes to this clinical-stage biotech. Axsome's CNS pipeline offers long-term investors two clear-cut ways to win.

First, AXS-05, despite its prolonged regulatory review, is likely to get approved at some point. The drug posted stellar pivotal-stage results, after all. So while it might take a second regulatory review to get AXS-05 across the finish line, the drug's underlying value proposition shouldn't be diminished in the long run. Second, there are multiple blue chip biotechs that could use a top-notch CNS pipeline like Axsome's. Therefore, this small-cap biotech stock could very well turn out to be a top buyout target in the not-so-distant future.