Blockbuster drugs are those that generate at least $1 billion in revenue a year for the pharmaceutical companies that produce them. While it's true that many pharmaceutical companies are extremely profitable, there's also a lot of time, work, and money that goes into the development of new drugs. That's why certain breakthrough drugs are a real reason for pharma companies and their investors to celebrate -- especially those that wind up being blockbusters. The problem, however, is that due to patent laws, the success of blockbuster drugs is often short-lived. 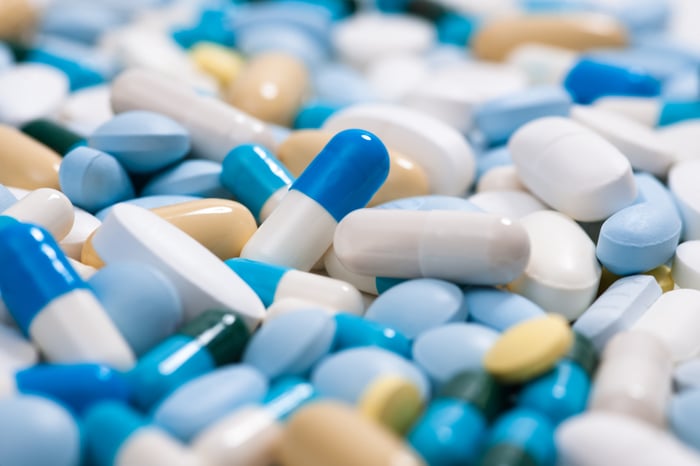 Blockbuster drugs are those that are typically used to treat chronic or long-term medical problems, as opposed to acute or short-term conditions. Common examples of blockbuster drugs include medications for diabetes, cholesterol, high blood pressure, and cancer. Part of the success of these drugs stems from the fact that they're needed over a long period of time, and that they play a key role in helping doctors manage their patients' conditions.

Cimetidine (marketed as Tagamet), a heartburn and stomach acid treatment, was the first drug to generate over $1 billion a year in sales and, as such, has gone down in history as the first ever blockbuster drug on the market. It has since been joined by popular drugs such as Lipitor, which treats high cholesterol, Advair, an asthma treatment, and Nexium, which treats gastroesophageal reflux disease (GERD ).

Pharmaceutical companies rely heavily on blockbuster drugs to bring in profits. The problem, however, is that when a blockbuster drug's patent expires, the company behind it can start to see a major dip in revenue.

In order to retain exclusive rights to sell a drug, a pharmaceutical company must obtain a patent. But because drug companies need to file for patents while their products are still in development, patents only give them a limited window of exclusivity in practice. Patents are effective for 20 years from the date of filing, which may sound like a decent window, but considering that it can take a decade or more to actually bring a new drug to the market, pharma companies don't actually have all that much time to recoup the money and resources they put into researching and developing their products.

Once a drug's patent expires, competitors can introduce generic versions to the market at lower prices, thus leading to a major loss in market share for the original developer. One such example is Pfizer. When its blockbuster drug Lipitor lost its patent protection in 2011, sales dropped over 90%, and Pfizer has yet to recover since.

Another problem with blockbuster drugs is that companies rely on them heavily to generate revenue, so when a blockbuster product fails, it can spell disaster. If a blockbuster drug is discovered to have major side effects or is subjected to a recall, the financial losses can be catastrophic. In fact, any sort of blockbuster drug scandal can cause pharmaceutical companies and their investors to lose millions overnight. For this reason, pharma companies often aim to develop a diverse and successful array of products rather than rely on one or two blockbuster drugs to keep themselves profitable.