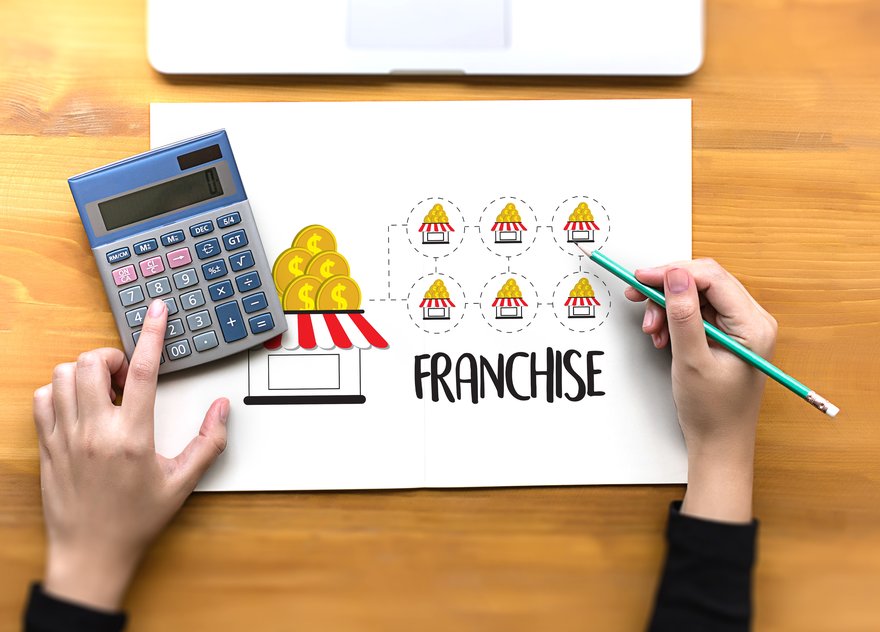 The franchise business model has long been a popular one, and franchising is an easy way to develop a business. Once you have a successful concept, you can outsource the work of opening new stores to franchisees, who replicate that concept as the franchise owners. This creates a win-win situation for both parties -- the franchisees get the benefits of a well-known brand, a blueprint for operating a business, and ongoing support, while the franchisors get to collect franchise fees, including royalties on sales and money to fund advertising.

If you’re not interested in actually running your own small business, one of the best ways to get exposure to this industry is by investing in franchise stocks or the stocks of publicly traded franchise companies. Franchising is a popular business model among fast-food restaurants, and it’s also common for hotels, gyms, travel planning services, and commercial cleaners. At scale, franchise stocks tend to generate high profit margins because franchisors have relatively low fixed costs and collect recurring revenue from royalties.

Let’s take a look at some of the best available publicly traded franchise stocks today.

Below is a list of some of the most popular non-restaurant franchise companies.

Planet Fitness was a model of excellence before the coronavirus pandemic as the company steadily expanded across the country. Its low-cost model, with monthly membership prices starting at $10, helped to ensure consistent demand.

Since its 2015 IPO, the stock price is up more than 400%. Planet Fitness shares have recouped nearly all of their losses from the pandemic, and its future continues to look bright once the COVID-19 pandemic fizzles out. While luxury fitness equipment maker Peloton (NASDAQ:PTON) has gotten much attention over the past year, working out at home isn’t always a substitute for the gym. Many people don’t have room in their home for gym equipment, prefer to exercise outside of their homes, or enjoy the range of equipment that gyms offer.

The company's number of locations recently surpassed 2,000 in the U.S., and it expects to expand to 4,000 gyms or more, giving Planet Fitness plenty of room to grow. With a high-margin business and a budget-priced product, the gym stock looks like a good long-term bet.

Marriott became the world’s largest hotel chain in 2015 with its acquisition of Starwood Hotels & Resorts, meaning that it’s also one of the biggest franchisors in the world.

While the company has struggled during the pandemic, one of the strengths of the franchise model is that it insulates the franchisor from economic downturns by removing many of the fixed costs that operators are obliged to pay.

Marriott’s revenue fell by about 50% in 2020 to $10.6 billion, but its net losses were comparatively small at just $267 million. The company performed much better than many of its travel industry peers such as airlines and cruise lines, which have higher fixed costs.

While the delta variant extended the ban on international travel, the company has been solidly profitable through the first half of 2021, indicating that the stock has mostly recovered from the pandemic despite lingering headwinds.

Snap-on Tools calls itself the world’s No. 1 tool brand, and franchisees sell its products from mobile stores, which are essentially trucks branded as Snap-on Tools stores.

Snap-on has delivered steady growth over its history, and the company has also recovered well from the pandemic. Its organic sales rose 10.8% in the fourth quarter of 2020, and the company posted an operating profit margin of 20%, which is a reflection of the strength of the franchise model. Results were strong in the first half of 2021 as well.

The company’s brand and its wide range of tools and equipment have made the stock a historical outperformer. Its business model should continue to deliver solid results since there is always a market for its products.

The housing market has boomed since the pandemic, so it shouldn’t be a surprise to find RE/MAX on this list. The company is the world leader in residential real estate sales by transactions and is therefore well-positioned to capitalize on the housing boom, which has shown little sign of slowing down. Today, the brand has 135,000 agents in 8,000 offices across 110 countries and territories.

After a decline during the 2007-2010 housing bust, the business has been growing steadily in recent years, although revenue fell in 2020 due to incentives offered during the pandemic in the spring when the housing market briefly froze. So far, however, the market is looking bright, with existing home sales on track to reach post-2021 highs and revenue rebounding through the first half of the year.

The company also has a track record of raising its dividend, and it currently offers a dividend yield of 2.9%, making RE/MAX an appealing choice for dividend investors.

Restaurants are the best-known type of franchise business. Take a look at some of the best restaurant franchise stocks below

The fast-food giant has more than 35,000 locations around the world, with the vast majority -- more than 90% -- owned by franchisees. A recent initiative under former CEO Steve Easterbrook converted many of the company’s restaurants in China and other international markets into franchises, giving the company even more of an “asset-light” model that freed it of the fixed costs of running restaurants. McDonald’s also owns much of the real estate on which its franchise restaurants are built, allowing the company to collect rent from franchisees.

The company has weathered the pandemic well, thanks to its focus on drive-thru service and recent embrace of delivery. McDonald’s is strongly positioned to gain market share as the economy reopens, and it is already operating above pre-pandemic levels.

Wingstop is much smaller than McDonald’s, but the chicken wing seller offers a low-cost initial franchise fee and a simple menu, making its franchises easy to operate. It’s also been a big winner during the pandemic since its small-footprint model lends itself well to takeout and delivery. The company has even begun experimenting with “ghost kitchens,” a delivery-only format. Domestic same-store sales jumped 21.4% in 2020, and it managed to tack on modest comparable sales growth in 2021 as it surpasses the boom year of 2020.

Chicken at fast-food restaurants also has proven popular, as evidenced by the success of peers such as Chick-fil-A and Popeyes, the latter owned by Restaurant Brands International (NYSE:QSR). Wingstop now has more than 1,500 locations around the world, giving it plenty of room to grow.

You might be surprised to learn that Domino’s has been one of the best-performing stocks on the market over the past 10 years, with its share price up nearly 2,000%. A successful turnaround plan that included reformulating the company’s pizza recipe has helped to drive the company’s growth during the decade, and its strength in delivery has made it popular in the pandemic.

This means a company offers shares of its stock for the public to buy.

Topping your portfolio with one of these three pizza stocks could be a good idea.

Are franchise stocks right for you?

Franchise stocks aren’t easy to pigeonhole since they hail from a wide range of sectors, including restaurants, retail, and travel.

However, publicly traded franchise companies tend to have a few things in common. They are high-margin businesses since the franchise model shifts the risks and fixed costs on to the franchise owner, and they tend to have well-known, valuable brands, which create competitive advantages.

Because the franchise model works best with well-known brands, these companies tend to be mature businesses, although there are some exceptions. Many franchise companies are also dividend-paying stocks, a sign of a business with reliable profits.

Overall, this business model offers a number of advantages, including high margins, the ability to rapidly expand, and low fixed costs. If you’re looking for a combination of growth and reliable profits that are recession-resistant, then franchise stocks likely deserve a place in your portfolio.

Calculated by average return of all stock recommendations since inception of the Stock Advisor service in February of 2002. Returns as of 01/28/2023.