Crypto gaming is on the rise, and gaming coins are becoming a popular choice as an investment.

With so many different types of cryptocurrency, investors have a variety of projects they can check out. Gaming coins, a relatively new type, have become a popular choice.

Gaming coins combine two extremely popular industries -- crypto and video games. Many are online games that use a cryptocurrency as the in-game currency. Players can use the game's crypto for purchasing characters and weapons. These games also often use a play-to-earn model, where players can earn crypto as they complete tasks.

Blockchain games were responsible for half of all blockchain usage in 2021, and in-game collectibles alone generated $2.32 billion in sales during the third quarter of the year. Progress has been stop-and-go since then, but this is a new industry, so gaming coins could still have serious potential. 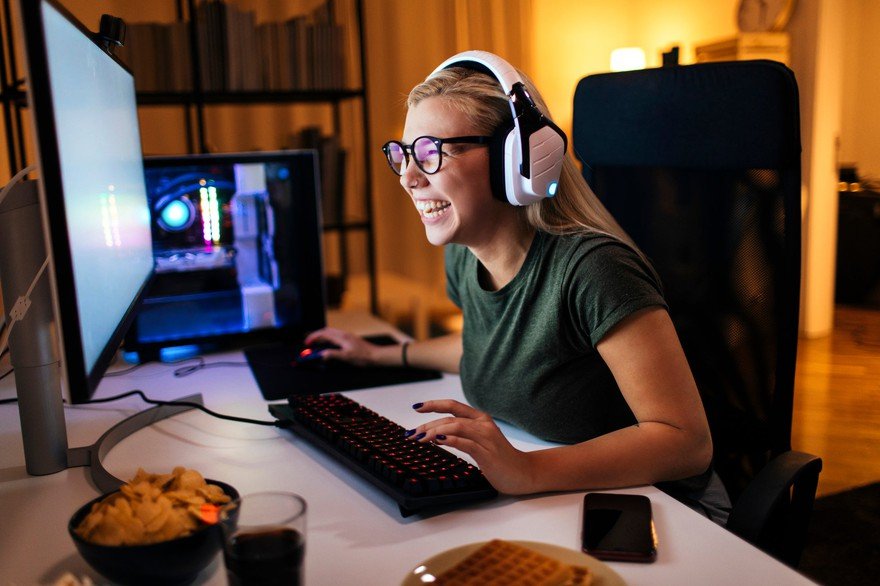 Here are some of the best gaming coins to watch and consider as an investment:

Built on the Ethereum (CRYPTO:ETH) blockchain, Decentraland is a decentralized metaverse that's built, owned, and governed by its users. Similar to other virtual worlds, it offers plots called LAND that players can purchase and use however they want.

What makes Decentraland special is its freedom for players. LAND can be used for games, artwork, activities, digital tourism, and much more. Decentraland also has communities, called Districts, dedicated to specific themes. For example, one of the largest Districts, Aetheria, is built around the cyberpunk aesthetic.

The native token for Decentraland, MANA, is used for in-game transactions such as buying LAND. It's also a governance token that gives holders voting rights.

Decentraland is still in the early stages of building its user base. Like other blockchain games, it has had trouble attracting more players in 2022. But it does have the first-mover advantage since it was one of the first platforms with a fully functional virtual world. That has also made it one of the most well-known gaming platforms.

This game became extremely popular in 2021, in large part because players can earn AXS gaming tokens for playing. Some players report earning hundreds to thousands of dollars worth of crypto per month.

Early investors were undoubtedly happy with Axie Infinity's stock performance. It was worth about $0.54 at the beginning of 2021 and would later surpass $150, an increase of more than 28,000%.

Axie Infinity has cooled off since then, losing a significant amount of value and seeing player numbers fall during the first half of 2022. However, more than 75% of active monthly users play Axie Infinity every day, so the game is good at keeping people coming back.

The Sandbox is a decentralized platform where players create their own 3D game worlds using visual scripting tools, which means no coding knowledge is required. Players make games and store assets on LAND, The Sandbox's digital real estate.

SAND tokens power The Sandbox. Players use these tokens for in-game transactions, such as buying equipment and LAND. There are a limited number of LAND plots available; only 166,464 will exist.

So far, The Sandbox has amassed a large and varied list of partnerships that could help build its user base. It's working with gaming company Atari to create virtual theme parks. Several celebrities, including Snoop Dogg and Deadmau5, have also gotten involved with The Sandbox and set up their own virtual estates.

Enjin Coin is a different way of investing in gaming coins. It's not tied to one specific blockchain game. Instead, Enjin Coin is made to work with a variety of different games.

The company behind this cryptocurrency, Enjin, offers software development kits. Developers can use the kits to create digital assets such as in-game currencies or special items for their blockchain games. Players can use Enjin's wallet to store their inventory for games connected to Enjin's platform.

Enjin Coin started 2021 at $0.13, hit $4.85 in November, and ended the year at $2.58, recording total gains of more than 1,800% that year. Although no one should expect it to repeat that performance, this cryptocurrency's versatility could help it do well in the future.

My Neighbor Alice is an upcoming multiplayer farm and builder game. Players can buy land spread around six islands, farm it, and buy animals from the marketplace. It has a lighthearted design that will remind many gamers of the Animal Crossing series. The character Alice serves as an "in-game friend," which could make this more beginner-friendly than most blockchain games.

ALICE tokens serve as the in-game currency. They're used for marketplace purchases, and players can earn ALICE tokens by completing quests. Token holders can also stake crypto and earn rewards.

My Neighbor Alice is one of the riskier crypto games for investors. The value of ALICE tokens fell considerably after their release, and the game has gone through a lengthy testing and development phase. It's hard to predict whether it will be a hit or even when it will launch. If the game takes off, the price of its cryptocurrency likely will as well.

Set to launch this year, Illuvium is an open-world role-playing game with elements of the Final Fantasy and Pokémon games. Players control characters called Hunters, and, as they explore, they encounter creatures called Illuvials. The Illuvials are NFTs, and, when you capture one, it's stored in your wallet. Since this is a play-to-earn game, players will be able to earn Illuvium tokens for winning competitions and tournaments.

Although Illuvium has been compared to Axie Infinity, there are several major differences. Unlike Axie Infinity, Illuvium will be in 3D with an open world and will have a story mode. If it lives up to the hype, it could be the rare crypto game that also connects with traditional gamers.

Illuvium's price and market cap rose significantly in anticipation of the game's release but fell off with the rest of the crypto market. It's still on the pricey side for a game that isn't out yet. If nothing else, it's worth keeping an eye on Illuvium to see what gamers think when it's released.

Most of the popular blockchain games use NFTs. Yield Guild Games is a decentralized organization that aims to maximize the value of investing in NFTs used in different games, including Axie Infinity and The Sandbox.

It does that by selling and renting NFTs. This allows owners to make money from their NFTs and lets other players purchase or rent them. For example, if you own any Axies (the creatures used in Axie Infinity), you could offer them through Yield Guild Games. Another user could then rent your Axies in return for a share of the profits they make playing the game.

Yield Guild Games is a relatively new project, launching in July 2021. Over the following month, it rose in price by almost 550%, but then it lost more than half its value. Considering how important NFTs are to blockchain gaming, Yield Guild Games has a clear use case, and it could do well if the industry keeps growing.

Should you invest in gaming coins?

Even for crypto, gaming coins are a risky investment. Although quite a few of them had extraordinary success in 2021, practically the entire blockchain gaming market fell off after that, and several popular projects lost 80% or more from their previous highs.

The bottom line is that gaming coins have a very uncertain future. It's easy to see the potential of virtual worlds and games built on blockchain technology, but they have a long way to go to catch up to the video game industry. Even if blockchain gaming manages that, there's no telling which, if any, of the current games will survive.

If you don't want to spend too much time diving into gaming coins, or if you're concerned about the risk, cryptocurrency stocks are a good alternative. You could also stick to some of the market leaders, such as Bitcoin (CRYPTO:BTC) and Ethereum, which tend to be a little safer than smaller cryptocurrencies (although they're still risky and volatile).

For those who decide to pursue crypto gaming as an investment opportunity, the traditional advice of doing your research is more important than ever. Since gaming coins are new, they don't yet have an established track record. Take your time learning about what they offer and what their goals are to make an informed decision.

Here's Why the Worst Is Over for AGNC Investment Stock