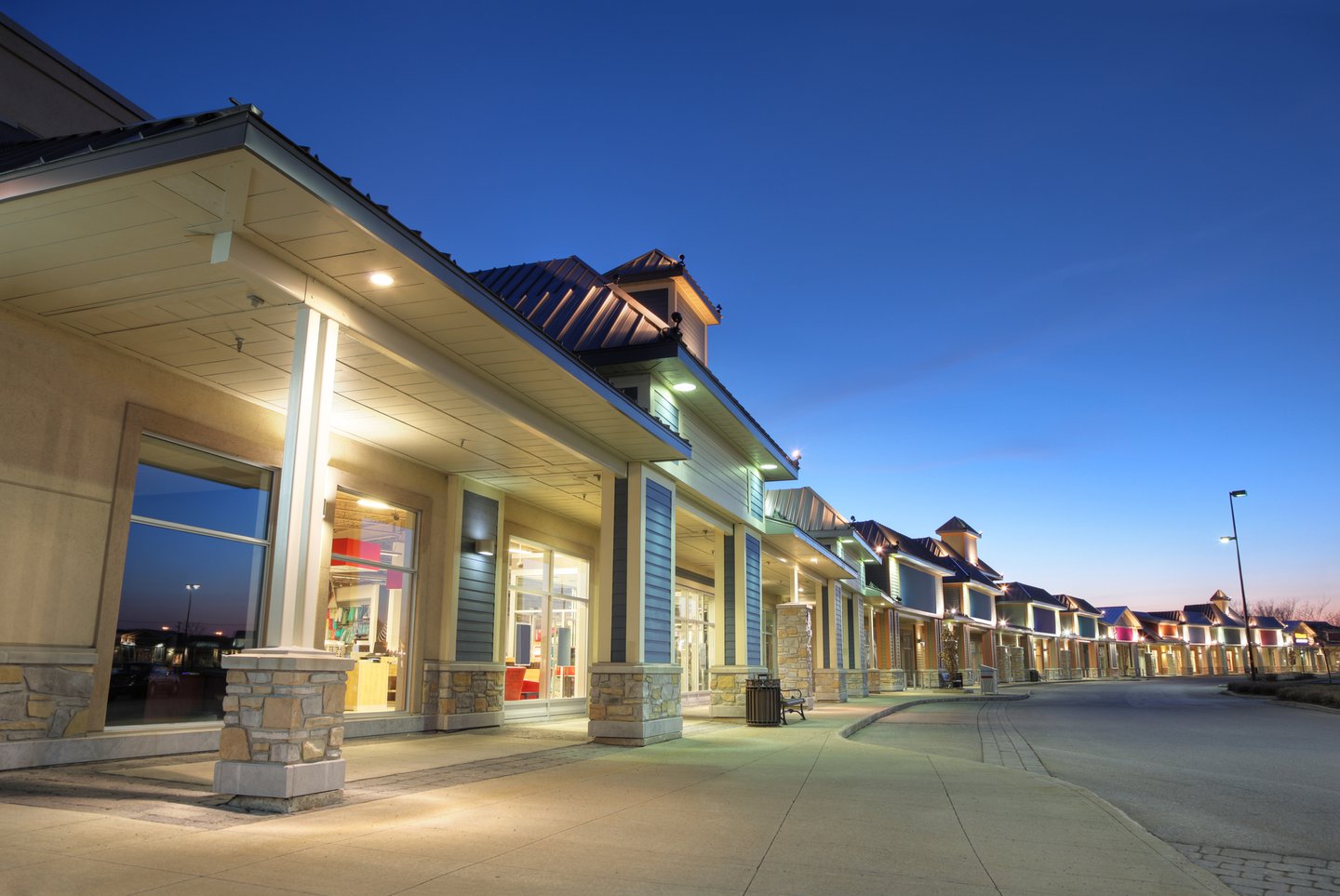 The term "retail REIT" refers to any real estate investment trust whose primary tenants operate retail businesses. And for the purposes of commercial real estate, restaurants, bars, entertainment businesses, and service-based businesses are also typically considered to be part of the retail category.

Most retail REITs specialize in a certain subtype of property. While there are many different retail REITs, each with a somewhat different investment strategy, the vast majority of retail REITs can be classified into one of three categories:

Why have many retail REITs been so beaten down in 2020?

This shouldn't come as a major surprise. After all, retail real estate is occupied by tenants that mostly depend on people being able and willing to go out and spend money. When the pandemic worsened in March, most non-essential retail businesses in the United States were forced to shut down, and many of those that were deemed essential continued to operate on a limited basis (such as curbside service only).

While the profitability of the underlying retail businesses doesn't directly affect the retail REITs that own them, the disruption caused by the pandemic made many retail tenants unable or unwilling to pay rent. Just to name a couple of notable examples, restaurant chain Cheesecake Factory (NASDAQ: CAKE) and apparel retailer Gap (NYSE: GPS) both refused to pay rent during the shutdown. And they weren't the only ones. In fact, Commercial Observer reported that just 46% of retail tenants paid rent in May 2020.

Should investors worry about the threat of e-commerce disruption?

The short answer is yes, but there's more to the story.

First, it's important to note that retail REITs were dramatically underperforming the market before the COVID-19 pandemic set in, and e-commerce was the primary reason. Since 2010, the percentage of retail sales that can be attributed to e-commerce has steadily risen from 4% to 11.5%, and this trend doesn't show any signs of slowing down.

However, not all retail is particularly vulnerable to e-commerce disruption. Service-based retail like restaurants and hair salons are an obvious example, as are convenience stores (especially if they sell gasoline), fitness centers, and auto repair businesses. These businesses sell things that can't be sold online. Discount-oriented retail is another type that isn't particularly vulnerable, as businesses like warehouse clubs and dollar stores tend to offer bargains that even Amazon.com (NASDAQ: AMZN) can't match.

Furthermore, there's a big difference in e-commerce vulnerability when it comes to the quality of the properties and the tenants. As a simplified example, a national big-box retail chain has more resources to compete with e-commerce giants than a local retail establishment. And retail properties with modern dining establishments, entertainment venues, and other attractions are in a better position to keep foot traffic coming in than retail properties that are somewhat run down and depend mainly on the strength of their anchor tenants. In short, quality is very important when it comes to the ability to compete against e-commerce.

Without further delay, here are three top-quality retail REITs you might want to put on your radar, followed by why I'm a fan of each one.

A mall operator, but so much more

You'll notice in the chart that Simon Property Group is the worst-performing of the three REITs, and it's not hard to see why. While many shopping centers and freestanding retail tenants are considered essential and have been open throughout the pandemic, Simon's malls were entirely closed in mid-March and remained that way for the next few months.

However, there are some good reasons to be optimistic about Simon's future. For starters, Simon is the largest mall operator in the U.S. and also has some of the most high-quality mall properties. In fact, in a recent list of the 10 malls in the U.S. with the highest annual sales, Simon owns seven of them. Its retail tenants actually reported a year-over-year increase in sales per square foot in 2019 at a time when many retailers are struggling, which shows how desirable and productive its properties are.

The reason is that Simon has been investing billions into its properties to transform them into modern mixed-use properties with tons of non-retail elements, such as entertainment venues, hotels, and office spaces. The idea is that if Simon's malls become destinations, the retail sales will take care of themselves.

Simon recently reported that all of its U.S. retail properties were reopening by July 6 and that "since reopening, many tenants have reported higher-than-expected conversion rates and sales." In a nutshell, it may take some time for Simon's mall traffic to return to pre-pandemic levels, but the company should be just fine long term, and now could be a smart time to buy at a discount.

Not your typical retail REIT

Realty Income has experienced the smallest hit to its stock price out of the three REITs mentioned here, and for good reason. The company is a net-lease REIT with about 6,500 properties throughout the U.S. and U.K. And most of them operate so-called essential businesses that have remained open throughout the pandemic.

Just to name a few examples, Realty Income's largest types of tenant businesses include convenience stores, grocery stores, drug stores, and dollar stores -- all of which have mostly remained open in the U.S. Because of the "essential" nature of the portfolio, Realty Income's June rent collection rate of more than 85% is well above most peers, even in the net lease space.

I've previously referred to Realty Income as the best all-around dividend stock in the market, and I still feel that way. The recession- and e-commerce–resistant nature of its tenant businesses should help minimize vacancies, and its net-lease structure locks tenants in for decades at a time, and with automatic rent increases built into the leases.

The proof is in the performance. In July, Realty Income is set to pay its 600th consecutive monthly dividend, and it has increased the payout for 91 quarters in a row. What's more, the REIT has generated 15.3% average annual total returns for investors since its 1994 NYSE listing, handily beating the S&P 500.

Kimco Realty is a large retail REIT that focuses on shopping center real estate. During the COVID-19 pandemic, Kimco has a slightly above-average rent collection rate (58% in May), but the nature of its tenants should allow the company to do just fine over the long run.

While only about 43% of its tenants are in essential retail businesses, most of its tenants are rock-solid large companies. Anchors such as Walmart (NYSE: WMT), Target (NYSE: TGT), and Albertsons (NYSE: ACI) account for 76% of Kimco's leasable area, and national mid- or small-size stores make up another 17%. Just 7% of Kimco's space is occupied by local small shops, which are the most vulnerable as the pandemic continues. And, with $1.8 billion in net liquidity, Kimco should be able to make it through a longer-than-expected period of depressed rent collection relatively unscathed.

It's also worth mentioning that much of Kimco's uncollected rent isn't lost money -- it's simply deferred, meaning that Kimco will likely get paid eventually. Now, I'm under no delusions that Kimco will ever collect 100% of its rent from the pandemic months, but the point is that the actual rent collection number will be significantly better than 58% when all is said and done.

Above all, I'm a fan of Kimco because of the quality of its properties and tenants. Most of its properties are in high-value metropolitan markets, and Kimco's portfolio is 96% occupied. When the pandemic is behind us, I'm confident that the current valuation will look like a steal in retrospect.

To be clear, if the pandemic worsens, these stocks could certainly come under pressure. And I'd expect a high level of volatility regardless for as long as the pandemic lasts. I'm not expecting a smooth upward trajectory by any means, but patient long-term investors with a relatively high level of risk tolerance could be handsomely rewarded for getting in during the tough times.