In 2014, Colorado and Washington became the first states to allow the sale of cannabis products. Less than a decade later, a majority of states now allow the distribution of medical and/or recreational marijuana, or have ballot initiatives in place that would do so.

The map below from the Federation of Tax Administrators shows the status of marijuana laws across the United States. 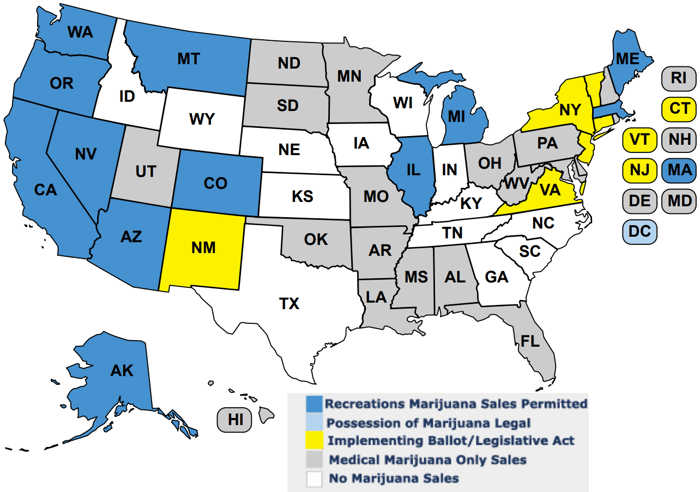 Legalization of cannabis products has been a boon for state budgets, with states reporting a combined total of $10.4 billion in tax revenue from cannabis sales as of the close of 2021, not including any revenue produced by medical marijuana distribution. Local towns and cities with thriving marijuana operations have also generated millions.

Here are the statistics on how much states make from marijuana taxes, how they tax cannabis, and what they use that money for.

The table below shows the revenue collected in states with operational marijuana programs in 2021. Total tax collected varies depending on state population, how long the program has been established, and the method of taxation.

A number of states have legalized recreational marijuana but have a less-than-fully operational market. In 2021, the Tax Foundation has estimated excise tax revenue for states with a market that has been operational for at least three years. Here's how much these states may stand to make once their markets are fully established:

Of course, these states aren't likely to see these numbers in excise tax revenue until at least three years after they establish a market. Seeing numbers in the $2–$10 million range is more likely in early years.

But these states are taking steps to bring in some of that revenue, even if they're moving slowly.

How much revenue are other states leaving on the table?

Using average excise tax figures and the number of marijuana-using residents in each state, the Tax Foundation estimated the potential excise tax revenue with a market established for at least three years.

Here's what they found:

Not all states break down their revenue reports by medical versus recreational marijuana, but the table below shows the sources of tax revenue by type of cannabis use when data is available.

Colorado and Washington were leaders in the recreational marijuana movement, acting as early as 2012 to move toward legalization. As a result, it comes as no surprise that they've generated more revenue from marijuana taxes than other states, some of which have had an operational market for two years or less.

Still, the tables below show the tremendous potential for states to generate significant revenue over time. In fact, the Tax Foundation estimates the market for legal marijuana could be worth as much as $30 billion by 2023.

With states facing budget shortfalls resulting from COVID-19, revenue from recreational marijuana could be a much-needed lifeline in locations that pursue legalization or facilitate the expansion of current markets.

Now let's take a look at how cannabis tax revenue has grown over the years for each state -- as well as how those states are using that money.

Alaska approved the legalization of marijuana in 2014 under Ballot Measure 2. Retail sales began in October of 2016. The Marijuana Control Board was tasked with both licensing and tracking cannabis operations statewide.

How does Alaska tax marijuana?

Arizona voters approved Proposition 216, the Marijuana Legalization Initiative, in 2020. This ballot initiative legalized recreational marijuana under the purview of the Arizona Department of Health and Human Services. DHS began to license retail establishments on January 16, 2021.

In its first year of operations, Arizona collected more than $217 million in tax revenue from both adult use sales, medical use sales, and excise taxes.

How does Arizona tax marijuana?

Excise tax revenues are dedicated to:

California legalized marijuana in 2016 under Proposition 64, a ballot initiative. The first retail sales in the state began in January of 2018 and in November of that year, medical marijuana was exempted from the state sales tax. The Department of Cannabis Control was vested with responsibility for taxation and licensing.

How does California tax marijuana?

How does Colorado tax marijuana?

Colorado has a 15% wholesale excise tax on marijuana as well as a 15% retail excise tax. Recreational marijuana is exempted from general sales tax.

The cannabis tax revenue from the wholesale tax goes to the Building Excellent Schools Today (BEST) fund. The first $40 million is earmarked for constructing new schools.

On June 22, 2021, Governor Lamont signed SB 1201 into law, legalizing cannabis for recreational use. Retail sales will begin by the end of 2022.

The State Office of Fiscal Analysis anticipates total state and municipal tax revenue will equal $4.1 million in fiscal year 2022, and will reach 73.4 million by fiscal year 2026.

How will Connecticut tax marijuana?

Connecticut will impose the following taxes on recreational marijuana:

During the first two fiscal years, revenue generated from Cannabis sales will be used to support administrative costs. In subsequent years:

Recreational cannabis use was approved in Illinois in May of 2019 when the Cannabis Regulation and Tax Act passed under House Bill 1438. The Governor signed the legislation into law in June of the same year, and retail sales began January 1, 2020.

How does Illinois tax marijuana?

Maine legalized marijuana in 2016 under a ballot initiative, Ballot Question 1. In response, the Legislature passed LD 1719, an Act to Implement a Regulatory Structure for Adult Use Marijuana. The Legislature overrode the governor's veto of the bill and retail sales began on October 9, 2020.

The State of Maine operates on a fiscal year that runs from July 1 through June 30. Accordingly, revenue and expense information from state fiscal year 2020 covers the period from July 1, 2019 through the conclusion of the fiscal year on June 30, 2020.

How does Maine tax marijuana?

Recreational marijuana use was approved in 2016 under Ballot Question 4. While retail sales were originally set to begin in January of 2018, this was delayed until July 1, 2018 under Legislation H 3818. The state's first retail store opened in November of 2018.

How does Massachusetts tax marijuana?

In Massachusetts, retail cannabis customers pay a retail excise tax of 10% plus a general sales tax of 6.25%.

The excise tax support programs like the Alcoholism Administration and the Cannabis Control Commission.

Marijuana was legalized in a 2020 ballot initiative, Montana I-190. Under the Marijuana Legalization and Tax Initiative, retail sales began in 2022.

In January of 2022, an estimated $22.6 million in marijuana sales were made and generated $2.96 million in tax revenue.

How does Montana tax marijuana?

Michigan legalized recreational marijuana in 2018 and its first dispensaries opened in December of 2019.

How does Michigan tax marijuana?

Consumers currently pay a 10% excise tax and 6% sales tax. The excise tax applies only to recreational, not medical marijuana.

In the first two years of legalization, $20 million in revenue will go to medical marijuana research. The rest will be split between cities, townships, villages, counties, the state's School Aid Fund, and the Michigan Transportation Fund.

Recreational marijuana sales were approved in 2016 under Ballot Question 2. The ballot initiative indicated retail sales were to start in January of 2017, the Department of Taxation pushed the start date back to July 1, 2017.

How does Nevada tax marijuana?

Nevada taxes weed at the retail (10% of purchase) and wholesale (15% of fair market value) levels. There is also a 6.85% sales tax as well as local taxes charged in some municipalities.

Income from the retail tax goes to the state's rainy day fund. Revenue from the wholesale tax goes to cover expenses and boost the rainy fund as well.

In March of 2021, the New Mexico legislature passed the Cannabis Regulation Act to allow commercial production and sales to residents 21 and over. Commercial sales are expected to begin on April 1, 2022.

How will New Mexico tax marijuana?

New Mexico will impose several taxes on recreational cannabis including the following:

The tax on medical marijuana was dropped because of the imposition of the tax on legalized recreational marijuana.

New Mexico will distribute the proceeds from the excise tax to municipalities and counties.

Recreational marijuana sales were legalized in New York by S. 854, which was signed into law by Governor Andrew Cuomo in March 2021. Retail sales are expected to begin on April 1, 2022.

How will New York tax marijuana?

New York will impose the following taxes on marijuana sales:

New York is expecting to use the tax revenue from marijuana sales to offset the decline in revenue resulting from a reduction in taxable cigarette consumption.

Oregon legalized recreational marijuana in 2014 when voters approved Initiative Measure 91. In 2015, the legislature approved a bill allowing retail sales to start October 1, 2015. Sales were initially managed through medical dispensaries and the state began granting recreational licenses in October of 2016.

How does Oregon tax marijuana?

Vermont legalized the possession of recreational marijuana in 2018, though taxes have only more recently been passed. Retail sales operations are expected to begin on October 1, 2022.

How will Vermont tax marijuana?

The state of Vermont imposes a 14% excise tax on marijuana at the point of sale. There's also a 6% general sales tax.

A research report published by the RAND Corporation suggests that aggressive taxation could produce between $20 and $75 million in annual revenue for the state.

Bill S.54 states that "revenue from the sales and use tax imposed . . . on retail sales of cannabis or cannabis products in this State shall be used to fund a grant program to start or expand afterschool and summer learning programs, with a focus on increasing access in underserved areas of the State."

Sales of marijuana were legalized in 2012 after voters approved Measure Initiative 502. The State Liquor Control Board was vested with responsibility for regulating and taxing cannabis sales. Retail sales first began in July of 2014 and medical dispensaries have been required to have a retail license since June of 2016.

How does Washington tax marijuana?

Washington charges a 37% retail tax on marijuana as well as a 6.5% retail sales tax. Medical cannabis is exempt from sales tax.

It goes to a variety of places. Here are a few of the places that money went in 2020:

The status of marijuana legalization around the United States

All of this tax revenue may play a part in legalization discussions. But some states haven't been swayed. Here are the states where cannabis is legal, illegal, criminalized, or somewhere in the middle: