As more employers offer both retirement plans, it's important for employees to know the difference.

More and more employers are adding Roth options to their 401(k) plans. If you recently gained the option to save in a Roth account, you may need to examine the advantages and disadvantages of a Roth 401(k) versus a traditional 401(k). 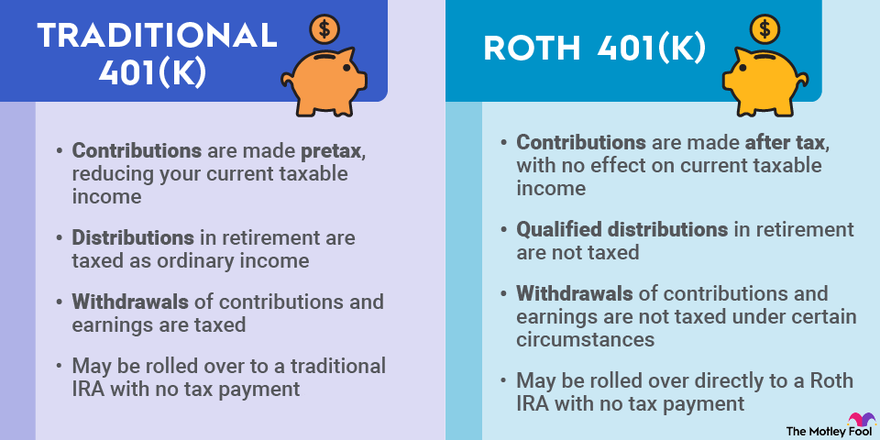 Both a traditional 401(k) and a Roth 401(k) are tax-advantaged accounts. That means there are tax savings to be had from using a 401(k) account instead of a taxable brokerage account.

Both accounts produce their biggest advantages if you don't withdraw funds before you reach age 59 1/2. Withdrawing from your 401(k), whether traditional or Roth, before that age may require you to pay a penalty and additional income tax. There are certain exceptions, such as first-time home purchases and medical or educational expenses. You can also withdraw funds starting the year you separate from service if you turn 55 or older that year, but that lets you avoid only penalties and not the taxes on early withdrawals.

If you make it all the way to retirement age without touching your funds, you can save a lot of money. Withdrawals from a Roth 401(k) come out entirely tax-free for both your contributions and your earnings. You'll still owe income taxes on the full withdrawal from a traditional 401(k), but you won't be subject to that nasty 10% penalty.

There are a few other differences between traditional and Roth accounts.

Traditional 401(k) accounts have required minimum distributions starting the year after you turn 73 (previously 72). If you don't take the minimum distribution, which is based on the account value and average life expectancy, you'll be penalized. The penalty is 50% for 2022 and previous tax years, but it drops to 25% beginning in 2023.

Roth 401(k) currently have required minimum distributions starting at 73, however, under the Secure Act 2.0 rules, RMDs will be eliminated from Roth-designated accounts in 2024. Until then, you can avoid them RMDs by rolling over the account into a Roth IRA before the year you turn 73.

Another rule to keep in mind is that you cannot take withdrawals from a Roth 401(k) within the first five years of establishing the account without paying a penalty. Even if you're over 59 1/2 or withdrawing earlier with the separation of service qualification at age 55 or older, you'll still pay both the penalty and the taxes on part of the withdrawal attributable to the earnings. So if you're starting to save late, and you think you might tap the account in just a few years, stick with a traditional 401(k).

Choosing the Best Retirement Plan for You

How Much Do I Need to Retire?

The end of work doesn't mean the bills stop. How much should you save for a great retirement?

How Much Money Should I Have Saved by 30?

Saving for retirement should start early. Here's how much to have saved with 30-plus years to go.

Since the biggest difference between a traditional 401(k) and a Roth 401(k) is in how they're taxed, which is best for you is a matter of your current tax situation and what you expect your taxes to look like in the future.

The important comparison is what your marginal tax rate is today versus what you expect your effective tax rate to be when you start taking withdrawals.

This decision can be challenging because it's impossible to know what tax rates will be in the future, so it's an inexact equation.

When Can I Retire?

What Is a Retirement Annuity?

12 Ways to Manage Inflation in Retirement