Learn the differences and similarities between a 401(k) and 457 retirement savings plan.

If your workplace offers both a 401(k) plan and a 457 plan to help you save for retirement, you may be wondering which one to invest in. The two retirement plans look very similar, and the super-creative numerical names based on IRS tax codes don't distinguish them much.

457s are savings plans primarily offered to government employees, including state and local government officials, public school teachers, county and city employees, and first responders. By contrast, 401(k) retirement plans are usually offered by private enterprises. But some big government employees might offer both. Here's how to decide which is the best choice for you. 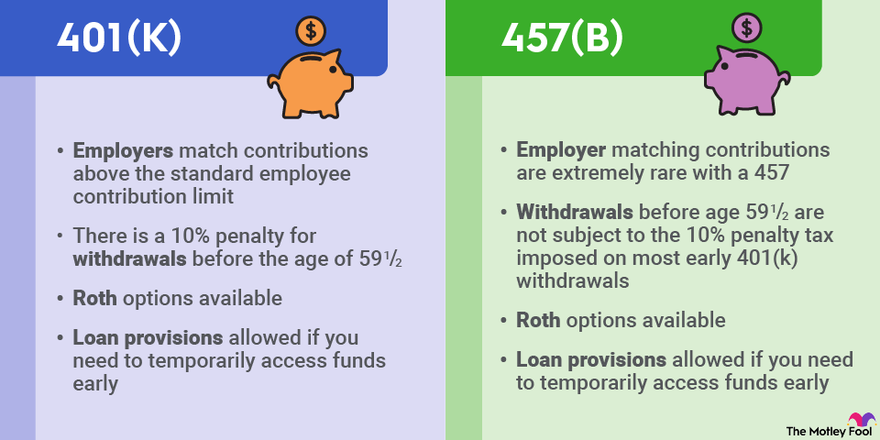 401(k) plans are qualified retirement plans, which means they conform to laws established by the 1974 Employee Retirement Income Security Act (ERISA). Those laws ensure private employees offer the same 401(k) retirement benefits to all employees, but they can also have their drawbacks.

The biggest drawback is restrictions on withdrawals. The IRS will impose a 10% penalty for 401(k) withdrawals before the age of 59 1/2, with only a few exceptions. This ensures that 401(k) savings go toward an employee's retirement.

A 401(k) also allows for matching contributions from the employer above the standard employee contribution limit. Employers will typically offer to match a certain percentage of an employee's salary if the employee contributes that much to their 401(k) plan. 401(k) matches can add up to a meaningful portion of compensation, especially as you earn raises.

457 plans are not qualified retirement plans, so they play by slightly different rules.

Since a 457 isn't subject to ERISA laws, withdrawals before age 59 1/2 aren't subject to the 10% penalty tax imposed on most early 401(k) withdrawals. That makes it easy to access your funds if you retire earlier than usual.

Which is better for you?

There are more commonalities than differences between a 401(k) and a 457.

The big differences are the penalty on early withdrawals and the potential employer match.

If your employer offers a match on the 401(k), it behooves you to contribute at least up until the match. Even if you expect to retire early, paying a 10% early withdrawal penalty on a 100% free match is still a good deal. Otherwise, those with plans for an early retirement ought to favor the 457.

All else being equal, investors should consider the investment options and fees for each plan. If one plan offers the ETFs or mutual funds you like or it has considerably lower fees, opt for that one. Fees can be a major drag on your investment returns over 30 or 40 years, so it pays to keep them low.

But maybe you don't have to make a choice at all -- there's nothing that says you can't contribute to both! If you want to get the employer match on the 401(k) but also want the flexibility of early withdrawals, invest in both plans.

Moreover, since a 457 isn't a qualified retirement plan, the contribution limits for a 457 and qualified retirement plans like a 401(k) don't overlap. That means you can contribute the maximum amount to both plans, and that's totally fine with the IRS. In 2023, that's a potential $45,000 in tax-advantaged savings if you're under 50 and your employer offers both a 401(k) and a 457. If you can swing it, that's probably the best option of all.

Learn how these employer-sponsored retirement plans work and if they’re right for you.

Government employees can take advantage of this retirement plan.

Choosing the Best Retirement Plan for You

How Much Do I Need to Retire?

How to Save on Healthcare in Retirement

Understanding Taxation of Your Retirement Income

How to Retire Early: 7 Steps