It's usually not easy to find a good mix of high yield and safety for dividend investors who want to avoid risk. However, it can be done, and believe it or not, the out-of-favor energy industry is home to two companies low-risk investors should be looking at today. Chevron Corporation (CVX 0.11%) is a good option if you can get past the relatively low price of oil, and Enterprise Products Partners L.P. (EPD 0.04%) is still as steady as a rock in the midstream space.

Chevron is one of the world's largest integrated oil majors. It yields around 4% today, with a dividend that's increased each year for 29 consecutive years. That, in and of itself, doesn't make the company safe, but it shows a true dedication to rewarding shareholders. Here's the thing: The oil downturn led the company to hold off on dividend hikes for 10 quarters -- the streak only remained alive because the company's dividend is historically increased in the middle of the year. The company finally started upping the dividend again in the fourth quarter of 2016, which is a telling move. 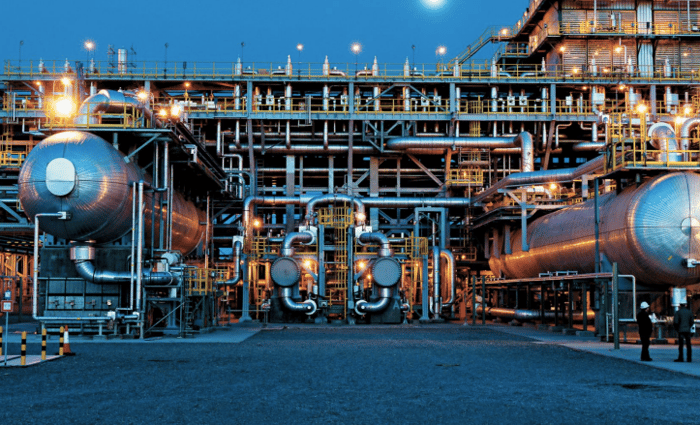 You see, Chevron lost money in 2016, but that fact hides what could be an important inflection point. After three consecutive quarters of red ink, the oil major was in the black in the third and fourth quarters last year. Notably, the company's U.S. upstream business, which was easily one of its most challenged during the downturn, actually made money in the fourth quarter.

It's been tough, but it appears that Chevron has started to adjust to the new oil landscape while protecting its dividend. And debt, while higher than it was, is still a fairly modest 25% or so of the capital structure. It's not out of the woods just yet, but this recovering oil major is worth a deep dive for risk-averse dividend investors now that oil prices, and the company's results, have risen from their lows. 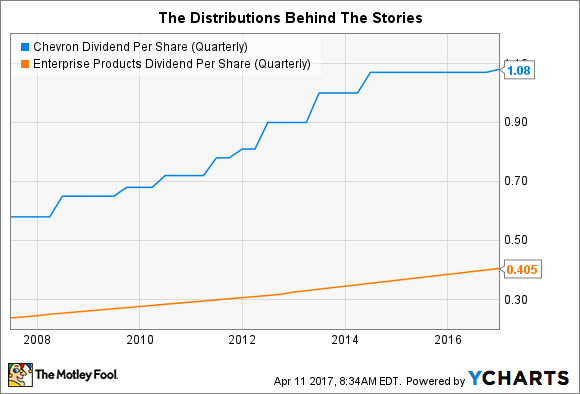 2. Slow growth from the middle

Enterprise Products Partners is very different from Chevron because it acts as a middleman, taking a toll for moving and processing oil and gas. Its assets span the gamut from pipes to ships, and just about everything in between (like processing facilities and storage). The price of oil and gas is far less important than the demand for the fuels, which is what affects the amount of oil and gas that flows through Enterprise's system. Yes oil prices plummeted, but demand didn't -- which is why Enterprise's distributable cash flow held steady through the downturn despite the deep drop in oil prices.

Enterprise, one of the largest midstream players in the United States, offers a distribution yield of nearly 6% backed by 20 years of annual dividend increases. That streak includes 50 consecutive quarterly hikes! Distribution coverage, meanwhile, was roughly 1.2 times in 2016, which provides plenty of room for the distribution increases to continue. That said, the coverage ratio was a far more robust 1.5 times in 2013, before oil prices started to fall. 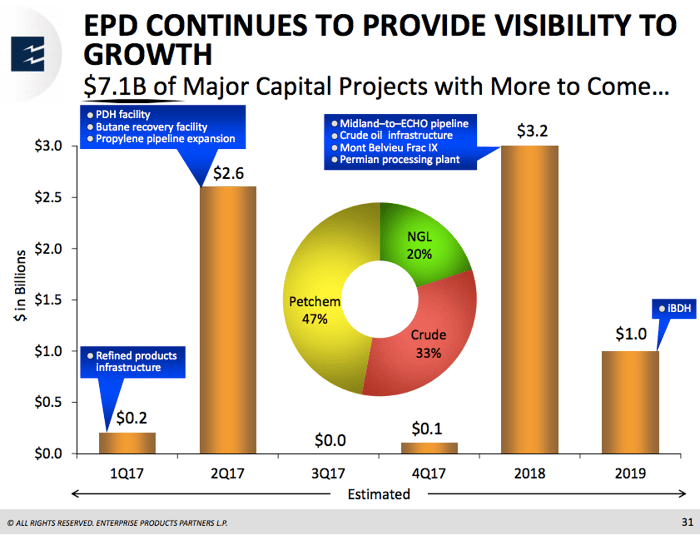 Enterprise is growing its business as you read this. Image source: Enterprise Products Partners L.P.

This is why it's so important that Enterprise has not stopped spending on expansion projects. Top- and bottom-line growth is going to come from the over $7 billion worth of projects expected to come online between now and 2019. And the partnership has proven very capable of expanding in this way, with more than $36 billion worth of organic growth projects under its belt since it came public in 1998 (in addition to $26 billion in acquisitions). Enterprise will never be exciting, but if you can get behind slow and steady, you should be looking at this midstream giant.

Chevron and Enterprise Products Partners are from the same industry, but they operate in very different spaces. Chevron is interesting because it's shown a commitment to shareholders right through a painful downturn. But the industry appears to be stabilizing, with Chevron increasingly looking like it has managed to adjust to the new dynamics. You get a nice 4% yield for sticking around.

Enterprise, meanwhile, didn't have much adjusting to do, it just keeps doing what it has always done. But that's rewarded investors with a roughly 6% yield and a distribution that's kept growing despite the oil headwinds. With more growth spending on tap, there's no reason to expect anything to change.

Why Shares of Chevron Are Falling Today
413%