Please ensure Javascript is enabled for purposes of website accessibility
Log In Help Join The Motley Fool
Free Article Join Over 1 Million Premium Members And Get More In-Depth Stock Guidance and Research
By Howard Smith - Mar 15, 2021 at 11:29AM

A major shareholder gives up control, but there's better news for the business today.

Shares of AMC Entertainment Holdings (AMC 2.95%) have been on a wild ride: from closing during the pandemic, to becoming a WallStreetBets forum favorite, to announcing reopening progress. The stock jumped again Monday, with shares up almost 22% as of 11 a.m. EDT.

Today brought company news on two fronts. First, Dalian Wanda Group, the Chinese controlling shareholder, has given up its majority control, while still remaining the company's largest shareholder. But perhaps more related to the stock move, the company announced that it is starting to reopen its theaters in the important Los Angeles market today. 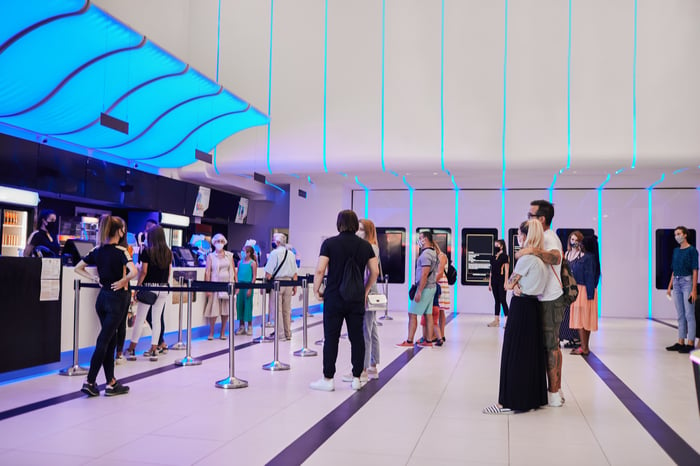 The struggling theater operator has raised capital to keep it afloat until business restarts. Now that is happening, and investors are showing approval. The company's Burbank and Century City locations in Los Angeles County are reopening this afternoon. And AMC is planning to open all its remaining 23 movie theaters in Los Angeles beginning on March 19. Also, pending local officials' approval, the company said it hopes that all 53 California locations will be open by March 19.

"The reopening of movie theatres in Los Angeles County and throughout California is a momentous occasion for AMC Theatres, for our guests, for our associates, for our studio partners," AMC CEO and president Adam Aron said in a statement. He noted that the Los Angeles market is about double the size of the New York City market. It being physically near the movie production studios is also symbolically significant.

Investors are cheering both the reopening progress, as well as the fact that shareholders can now meaningfully vote their shares, rather than control being with the former owner.