Please ensure Javascript is enabled for purposes of website accessibility
Log In Help Join The Motley Fool
Free Article Join Over 1 Million Premium Members And Get More In-Depth Stock Guidance and Research
By Dominic Rinaldi - Apr 17, 2021 at 10:55AM

Companies that beat the market consistently and deliver multibagger returns accomplish these successes by being able to innovate and reinvent themselves over the years. Sea Limited (SE 2.17%) has been doing this since its founding in 2009. Founder-CEO Forrest Li and his teams have created multiple business segments that integrate with one another. Sea Limited is focused on capturing leading positions in Southeast Asia and Latin America for mobile gaming, eSports, e-commerce, digital payments and banking, food delivery services, and artificial intelligence. In the past few years some of these segments have generated triple-digit revenue growth, growing margins, and the stock has delivered multibagger returns to shareholders. 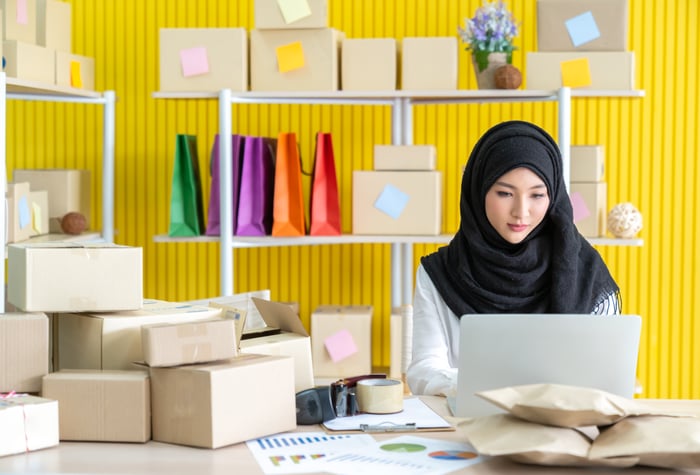 Li realized that social media users want better ways to connect with people. They flock to mobile gaming and eSports to compete with friends without weathering the negativity of other social sites. Combining this insight with his love of video games, in 2012 Li created Garena+, a mobile game and social platform with an interface similar to instant messaging platforms. Garena+ allows gamers to create friend groups, chat with friends online, see in-game achievements, and make in-game purchases with its virtual currency, Shells. Players are also able to form groups or clans, and chat with multiple players simultaneously through public or private channels within Garena+.

Garena Digital Entertainment also published local-language editions of the popular mobile games like Fifa Online, League of Legends, Speed Drifters, and Arenas of Valor. Garena took this ambition to another level when it started developing its own games; in 2017, it created Garena Free Fire, which became the most played mobile game globally in 2019 and 2020;.

Investors regard any stock that produces 30% or more annual revenue growth a high performer. For several years now, SEA Limited has nearly tripled that figure. Here are the astounding results for Garena in Q4 2020:

Branching out beyond gaming

Sea Limited's second business arm, Shopee, enables companies and shoppers to buy and sell goods online, making purchases faster and more convenient -- especially since the COVID-19 pandemic hit. Shopee operates in all seven major regions in Southeast Asia, with locale-specific branding and communications that resonate with customers locally. This specific regional approach to products and marketing has kept Shopee's customer base growing while preventing Amazon.com and other big players from gaining a foothold in its native markets.

Even before COVID, a report by 99 Firms Statistics predicted that some 95% of all commerce will take place online by 2040 . Shopee has created a logistics system that delivers products quickly at a lower cost. Garena's mobile gaming market helps to introduce customers to Shopee, but the service's great execution in sales and marketing keeps them coming back.

As of Sea Limited's most recent quarter, more customers than ever are using the Shopee platform to meet their e-commerce needs. Shopee saw one of it's best quarters in Q4 2020, with 178% year-over- year GAAP revenue growth to $842 million. For the first time ever, its quarterly gross order volume reached $1.0 billion with a gross market value of $11.9 billion.

Sea started its third core business arm, Sea Money, because a large portion of Southeast Asia and Latin America is underbanked and underserved financially. Forrest Li understood that mobile digital wallets help people in those regions transfer money to each other and give people the ability to make online and offline purchases, which can help grow Sea Limited's other businesses. Sea Money integrates with Shopee e-commerce and Garena Digital Entertainment, making it easy for customers to buy things online.

Sea Money has generated $60 million in revenue since being launched a year ago, and its volume of users is growing. In Q4 it had more than 23.2 million quarterly paying users for mobile wallet services, and for the year, it had a total payment volume of $7.8 billion.

Is Sea Limited thinking about new problems to solve?

There are excellent underdeveloped tech start-ups in Southeast Asia that need to be acquired to survive financially. Sea Limited has hired seasoned venture capital investor David Ma to lead its new investment capital firm, Sea Capital, built upon Sea's purchase of Ma's successful hedge fund, Composite Capital Management. Sea Capital is committed to injecting more than $1 billion over the next few years to allow Ma and his team to identify the next acquisitions that will strengthen the Sea Limited ecosystem.

Sea Limited has just started a fifth division, Shopee Food Delivery, capitalizing on its vast existing customer base to compete against other food delivery services such as Grab and Gojek. According to a report from The Asean Post, the region's food delivery market will grow from $2 billionin 2018 to $8 billion by 2025. If Shopee Food Delivery could capture 10% of that 2025 market , it would bring in an additional $800 million of revenue annually for Sea Limited -- an amount equal to roughly 20% of its nearly $4.4 billion in current trailing-12-month revenue.

Why would someone not want to purchase shares of Sea Limited?

Given Sea Limited's rapid success, some investors may feel like they missed the boat. Other investors are concerned with its lack of profitability -- Sea Limited projects a $1.6 billion net loss in 2021. But by 2024, analysts project the company to be fully profitable.

Sea Limited is executing at phenomenal growth rates and adding more businesses that will play an important role in the economies it serves. It's projected to double total year-over-year revenue again in 2021, and grow sales fourfold from that figure by 2024. Since mid-February 2019, Sea Limited's shares have grown more than 1,400%, dwarfing the S&P 500's roughly 50% return. In 2021, investors should watch for growth in revenue and earnings in the Sea Money business division and continued earnings growth at Shopee, and see whether the company's overall adjusted EBITA grows. These could be indicators of how fast the stock might rise in the year ahead.