Please ensure Javascript is enabled for purposes of website accessibility
Log In Help Join The Motley Fool
Free Article Join Over 1 Million Premium Members And Get More In-Depth Stock Guidance and Research
By Leo Sun - Apr 30, 2021 at 7:20AM

Should you buy this holding company instead of its main investments?

Liberty SiriusXM Group (LSXMA 2.22%) (LSXMB 0.51%) (LSXMK 2.19%) can be a confusing stock to own. It's one of the three main branches of Liberty Media, which also owns Formula One and the Atlanta Braves through the Liberty Braves Group.

Liberty SiriusXM is mainly a tracking stock for Liberty's stakes in two other public companies: Sirius XM (SIRI 1.30%), the satellite radio company that also owns the streaming service Pandora; and Live Nation (LYV 0.58%), the events promoter that merged with Ticketmaster in 2010. 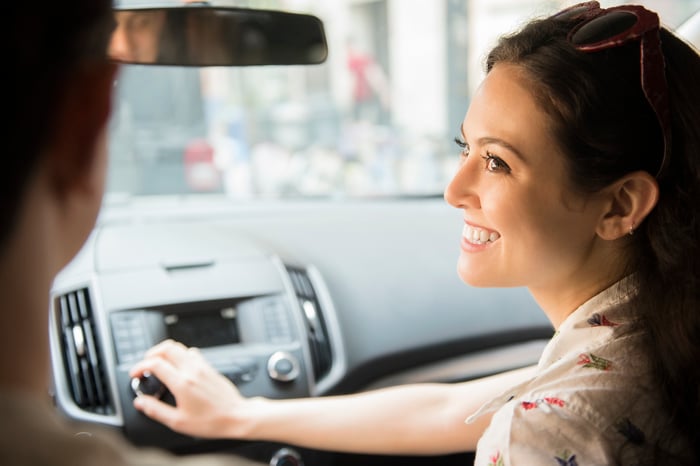 Liberty SiriusXM owns 76% of SiriusXM and 33% of Live Nation. Liberty SiriusXM's stock has risen more than 40% over the past 12 months, which outperformed Sirius XM's gain of about 10% but trailed far behind Live Nation's rally of nearly 100%. Does it make sense for investors to own Liberty SiriusXM, or should they simply buy its two main holdings separately?

How fast is Liberty SiriusXM growing?

Liberty SiriusXM's total revenue rose 3% to $8.04 billion in 2020. All of that revenue came from SiriusXM, which operates as a consolidated subsidiary. It holds its stake in Live Nation as an equity investment, which affects its profits instead of its revenue. It also incurs additional corporate expenses that don't impact SiriusXM's stand-alone financials.

Liberty SiriusXM's operating income dropped 51% to $749 million during the year, while Sirius XM's own operating income fell 48% to $858 million. Those declines were mainly attributed to its acquisitions of Pandora and the podcast producer Stitcher. On a GAAP basis, it posted a net loss of $2.33 per share, compared to a profit of $1.48 per share in 2019.

However, Liberty Sirius XM's adjusted OIBDA (operating income before depreciation and amortization), which excludes those expenses and other one-time charges, still rose 4% to $2.54 billion. SiriusXM doesn't use that metric, but its adjusted EBITDA rose 6% to $2.58 billion in 2020 as its EPS grew 25%.

Analysts expect Liberty SiriusXM's revenue to increase 5% to $8.4 billion this year, with a full-year profit. Based on those estimates, the stock trades at 24 times forward earnings and two times this year's sales -- which are slightly elevated valuations relative to its growth rates.

However, its number of subscribers still declined 1% to 34.7 million at the end of the year, due to lower auto sales, fewer automakers offering trial subscriptions, and shorter trial periods for certain automakers.

Pandora, which was already struggling against Spotify before being acquired, posted declining ad revenue and listener hours, and its monthly active users (MAUs) fell 7% to 58.9 million for the full year.

On the bright side, SiriusXM's growth offset Pandora's declines, and it's gradually expanding Pandora's reach into vehicles to pivot away from the saturated mobile market. SiriusXM also recently extended its contract with Howard Stern for five more years of live shows, which allays fears about the platform losing its top broadcaster.

Analysts expect SiriusXM's revenue and adjusted earnings to rise 5% and 8%, respectively, this year. The stock trades at 20 times forward earnings and three times this year's sales -- which actually makes it cheaper than its parent company.

Why did Liberty SiriusXM outperform SiriusXM?

It might seem odd that Liberty SiriusXM generated bigger gains than SiriusXM over the past 12 months. But if we pull the chart back further, we'll notice that SiriusXM outperformed its parent company over the past five years -- although neither stock can keep up with Live Nation. 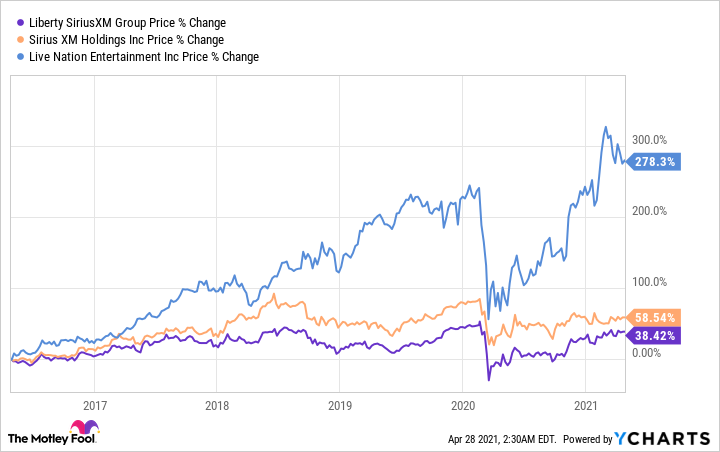 Meanwhile, Live Nation struggled in 2020 as the pandemic shut down live events, but analysts expect its revenue to more than triple this year and more than double next year as those events resume in a post-pandemic world. Live Nation isn't profitable right now, but it trades at just three times this year's sales -- which makes it cheaper than many other high-growth stocks.

Is Liberty SiriusXM worth buying?

I'm not eager to buy Liberty SiriusXM, for three reasons: its business model is confusing, the stock isn't cheap, and its two main holdings seem like better stand-alone investments that offer either better value or growth.

Is Liberty SiriusXM Stock a Buy?

Is Liberty SiriusXM Group a Buy?

Liberty SiriusXM Stock Upgraded: What You Need to Know