Please ensure Javascript is enabled for purposes of website accessibility
Log In Help Join The Motley Fool
Free Article Join Over 1 Million Premium Members And Get More In-Depth Stock Guidance and Research
By David Moadel – Sep 14, 2021 at 7:45AM

Health-insurance specialist Clover Health (CLOV 4.88%) appears to have gotten caught up in 2021's meme-stock mania. Retail investors' attempt to bid up shares and squeeze out rivals' bets against the stock nearly tripled its price in June. But informed investors should weigh Clover's very real, tangible pros and cons carefully before deciding whether to buy in.

The advantage of Medicare Advantage

Clover Health is a health insurer with a Medicare contract focusing on Medicare Advantage, which offers plans that often incur lower out-of-pocket costs than the original program. 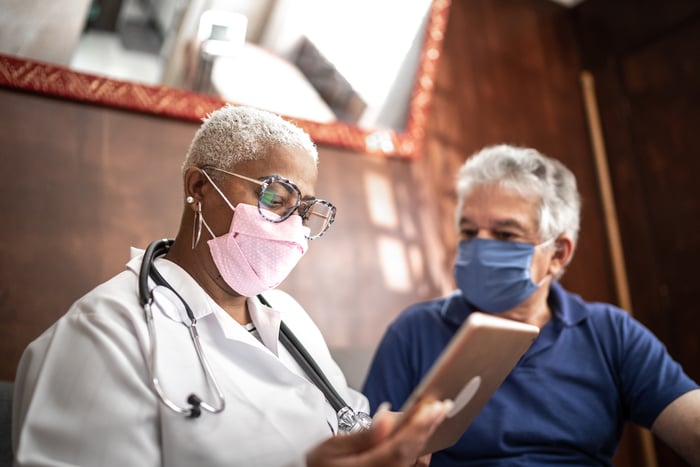 However, not all enrollees are the same financially: 52.7% of all Medicare Advantage beneficiaries live below 200% of the federal poverty level, compared to 39.1% of beneficiaries in traditional fee-for-service Medicare.

To better serve this group, Clover Health says its plans feature "$0 or low premiums, low copays, and low prescription drug costs, plus there's a cap on out-of-pocket expenses." The company can even help people apply for programs that may help pay for premiums, prescriptions, and even utility bills.

Clover's Medicare Advantage plans aren't necessarily cheaper than other insurers'. But Clover tries to make up for this with superior service. Its care team will actually follow up after tests such as blood tests and X-rays to confirm that patients understand the results and next steps.

A high-tech approach to healthcare delivery

To further bridge the gap between practitioners and patients, Clover offers a web application known as Clover Assistant. Through it, a patient's primary-care physician can access clinically useful and even potentially life-saving information, such as past diagnoses, medications, possible gaps in care, clinical recommendations, and available supportive services -- all brought to the doctor's attention through the power of machine learning.

Clover Assistant tells doctors what they need to know, so that patients and other healthcare practitioners don't have to -- for example, it'll notify a doctor if a patient is at risk for diabetes, congestive heart failure, or chronic kidney disease. It uses automated data feeds from hospitals and skilled nursing facilities to flag recent hospital stays to clinicians, encouraging doctors to check in sooner with patients home from the hospital -- and reducing the odds that those patients will get hospitalized again. This machine-learning-enhanced tool could prevent unnecessary hospital visits and patient illness while holding down healthcare costs.

A bright spot in the financial data

Does any of this translate to fiscal fitness for Clover Health? The company's second-quarter 2021 fiscal data suggests so -- at least on the top line.

During that quarter, Clover Health generated $412 million in total revenues, up 140% year over year. Clover Assistant was critical during this quarter; according to Clover Health, the platform is on track to manage over $1 billion of annualized revenues.

For comparison, the company took in around $200 million in Q1 2021 revenues, and $166.2 million in Q4 2020. But before that steady sales growth spurs you to buy in, take a closer look at how much of those sales makes its way to the company's bottom line.

Not necessarily a clean bill of health

Unfortunately, Clover Health sustained a net earnings loss of $317.6 million during Q2 2021, compared to a $48.4 million loss in Q1 2021, and a slim profit of $5.4 million in the year-ago quarter. Since the company's losing money at the moment, it has no P/E ratio to speak of. It might be cold comfort, but perhaps we can at least identify the potentially temporary reasons for Clover Health's losses.

First, the company is continuing to invest both labor and dollars in developing Clover Assistant. Regarding this, President and CTO Andrew Toy hinted at forthcoming features such as deeper electronic health record integrations, as well as the potential for Clover Assistant to support specialized services like diabetes management.

Second, Clover Health spent $107.8 million on salaries, benefits, and general and administrative expenses for 2021's second quarter, up from $40.7 million for the year-ago period. According to the company, most of this increase came from stock-based compensation -- new shares it issued to reward its own employees.

Only time will tell whether these expenditures keep weighing on Clover Health. Currently, the company has burned through $135 million in cash over the trailing 12 months, with $160 million in cash remaining on its balance sheet. Investors should keep a close eye on whether Clover Health's management implements aggressive cost-containment measures in the near future.

Investing in Clover Health requires a firm belief that its high-tech app and superior service will let the company ride the rapid growth of the Medicare Advantage insurer market toward profitability -- not an assured outcome, by any means.

Meanwhile, bear in mind that Clover's share price has already essentially erased its Reddit-fueled run-up. Unless the short-squeeze mob returns for round two, the stock's future depends on its fundamentals, and on investors' faith in Clover Health's business model.

Clover Health isn't necessarily a screaming bargain compared to the company's peers by one traditional metric. It sports a trailing 12-month price-to-sales (P/S) ratio of around 3.7, compared to rival insurers Cigna's (CI 1.27%) roughly 0.4 or Humana's (HUM 0.49%) 0.65.

To be honest, Clover Health is still a work in progress. Cautious investors can be optimistic about the Medicare Advantage insurer market as a whole, while remaining wary of Clover Health's difficulty with turning revenues into earnings. Investors who want to start a position now might consider buying in small chunks over time, to take advantage of any price drops if and when Clover Health's anticipated swing to profitability takes longer than expected.