This company has a strategy well adapted to the times and is making the most of it.

Chip shortages have applied the brakes on revenue for many major automakers, but at least one related company is thriving amid 2020's and 2021's auto sector disruptions -- car part seller Genuine Parts Company (GPC -1.44%). The company posted excellent third-quarter (Q3) 2021 results on Oct. 21, prompting a share-price boost as traders responded positively. Zooming out to the bigger picture, Genuine Parts may have several more years of growth ahead, with conditions favorable to other sector companies, too.

A promising future for Genuine Parts and similar companies

The engine driving much of Genuine Parts' success, and that of similar companies, is the chip shortage causing a production bottleneck and dropping numbers of new passenger vehicles available, even as demand soars in the wake of COVID-19 lockdowns. Various analysts expect the shortage to continue until anywhere from mid-2022 to sometime in 2023. Car analytics firms J.D. Power and LMC Automotive worked together on a report showing a lack of new cars caused August 2021 sales to drop 13.7% year over year and plunge 25.3% since August 2019. 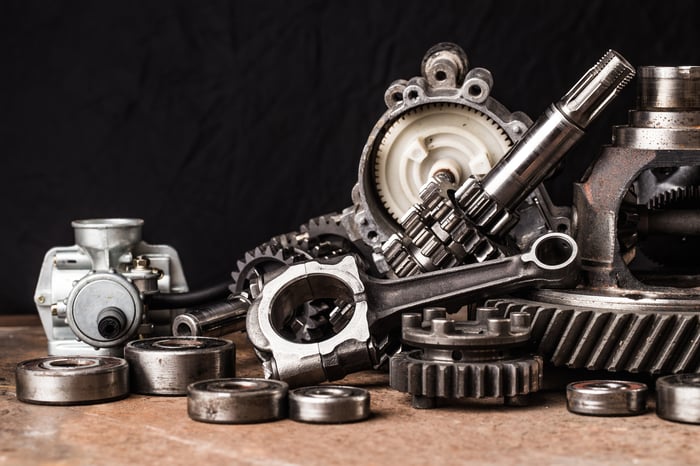 A J.D. Power executive, Thomas King, also noted that "dealers currently have approximately 942,000 vehicles in inventory available for retail sale, compared with roughly 3.0 million in inventory two years ago," with vehicles selling out as fast as they are transported to dealerships. The average new car price has jumped 12.1% to more than $45,000 in September 2021 according to Kelley Blue Book data.

Lack of new cars has made used cars a high-demand item, as reflected in their rising prices. KAR Global data from Oct. 27 shows wholesale used car prices up 39.4% from September 2019 and up 20.3% year over year at an average $15,546. These more affordable cars will, of course, need repairs much more frequently than new vehicles. Whether DIY or at a local mechanic or service center, parts replacement to keep these autos operational will drive ongoing car part demand. Further rises in used car prices will also motivate used car owners to "stick with the devil they know" and pay for parts rather than buying a more expensive "new" used car likely to eventually need repairs, too.

Even once the chip shortage ends, new car prices may not drop to previous levels. Ben Lee, a senior analyst on the semiconductor research team at Gartner, told ZDNet that even if the chip shortage eases by mid-2022, semiconductor prices will stop growing as quickly, rather than collapsing back to earlier levels -- "[so] far we don't see that any sign that we're going to see [a] crash." As a production input for new vehicles, the chips will continue increasing the price of automobiles even when manufacture ramps up again. With steel, plastic, and other raw material prices also very high, new cars will likely continue to be more costly even when they're abundant in showrooms again, once more providing a boost to more affordable used car demand.

Genuine Parts' share price has risen since its most recent quarterly results, the latest in a winning streak that's seen its stock surge 43% over the past 12 months and approximately 33% year to date. The company delivered positive surprises above analyst consensus predictions at both the top and bottom lines, surpassing the average forecast by 2.8% with its $4.82 billion in revenue and 14.6% with its $1.88 adjusted earnings per share (EPS). Q3 revenue surged 10.3% year over year, while EPS jumped 15%.

While Genuine Parts is obviously benefiting from the bullish environment, it also appears to be making the most of its strategic opportunity. The company grew its margins even in the teeth of supply chain disruptions, its 16th sequential quarter of margin growth, according to CEO Paul Donahue during the company's Q3 earnings conference call. This was achieved using worldwide sourcing of parts, Donahue noted, allowing the company to pick the most affordable suppliers. It also bought out an auto parts supplier in Ireland during the quarter, increasing its international presence from 13 to 14 countries in addition to the USA.

The company bought back $283.9 million in shares, repurchases that help to increase the value of stock still held by shareholders. It paid a quarterly dividend totaling $349.3 million and still managed to end the quarter with $919.1 million in cash. This excellent liquidity, combined with its overall balance sheet health, positions it to pursue "a robust pipeline of additional strategic and bolt-on acquisitions in both automotive and industrial segments," Donahue said.

Backed by its strategic agility at adapting to conditions, Genuine Parts raised its guidance for full-year 2021. Total anticipated sales growth increased from 10% to 12%, to 12% to 13% in its new outlook, while adjusted EPS also received a significant boost. Free cash flow is expected to inch up around $50 million at both the low- and high-end estimates. The company appears to be executing well despite the current challenges of the economy, wracked as it is by COVID-19 fallout, inflation, supply chain interruptions, and labor shortages, among other difficulties.

For at least the next year or two, it appears Genuine Parts will be operating in a growth sector. Even beyond this time frame, new car prices are likely to remain permanently elevated after full production resumes due to increased input costs, making this dynamic auto parts stock worth considering for your portfolio.

Here's Why Genuine Parts Is a No-Brainer Dividend Stock