Shares of Sirius XM hit a 52-week high yesterday. Let's take a look at how it got here to find out whether there are still clear skies ahead.

How it got here
This isn't just Sirius' yearly high -- the satellite radio company hasn't been at these levels since the 2008 recession. It's yet to recapture pre-recession highs, but many shareholders who jumped in after the fall expect to reach those levels again. Based on Sirius' performance, they could be proven right soon enough: 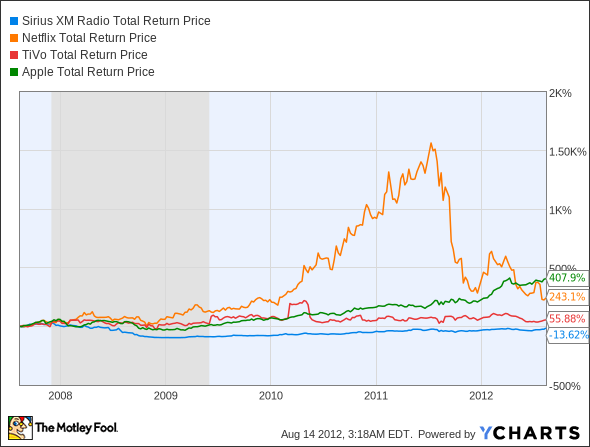 Sirius is the only stock in this basket of next-gen content providers that hasn't posted gains for the trailing five-year period. However, it's so close to breakeven that the simple forward march of time will hopefully get it there, thanks to the stock's cratering in 2008 and the company's improving fundamentals. Shorter time frames look much more favorable: 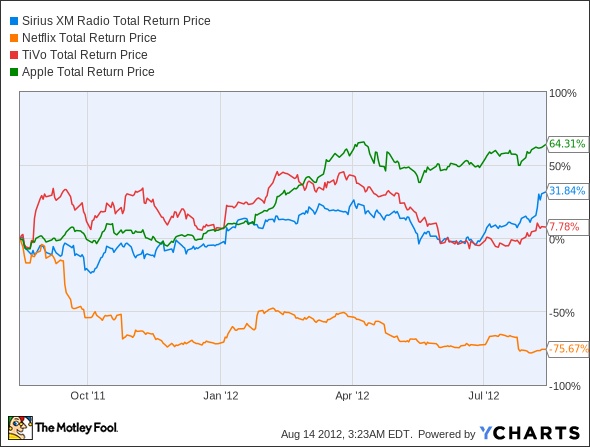 Let's take a look at how these companies stack up on some key metrics, to find out if Sirius can continue to be one of the top-performing entertainment content stocks.

What you need to know
At this point, it's pretty safe to say that Sirius' P/E ratio doesn't have a lot of bearing on its true value. Thanks to a massive one-time boost, the company reported $3.1 billion in quarterly profit, which pushed its P/E and net margin to ridiculous levels:

Source: Morningstar. NM = not material due to negative results.

However, when you look at Sirius' price-to-free-cash-flow ratio, it actually looks quite attractive for a company that's posted such consistent growth since evading bankruptcy years ago. It's certainly far less dearly valued than Netflix, which has had a harder time keeping its subscribers happy while simultaneously boosting their available content choices.

Given its growth, Sirius is still reasonably valued with price-to-earnings-before-taxes at 22.4. TiVo's got a better price-to-free-cash-flow ratio, but that company's been at a revenue standstill compared to Sirius: 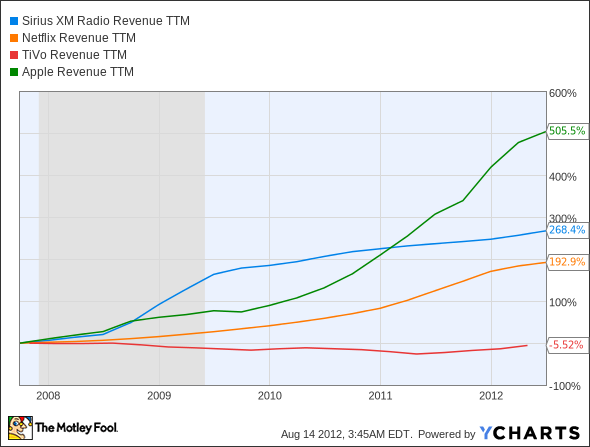 Sirius has certainly performed better than streaming-radio rival Pandora , which has faced an uphill battle converting ad-supported listeners to cold, hard cash. Now that Sirius has its own beefed-up streaming service available on Apple's iDevices, it should be able to put further distance between itself and any would-be challengers.

What's next?
Sirius has been gaining greater numbers of subscribers with each passing year, and its auto penetration rate is still quite low. The company seems committed to and capable of paying off its debts, and should end the year with impressive subscriber growth and nearly a billion dollars of cash in the bank. I'd be surprised if Sirius ends the year at a lower share price than it has today.

The Motley Fool's CAPS community has given Sirius XM a three-star rating, with 82% of our CAPS players expecting the company to continue its ascent. I'm one of them, having made an outperform CAPScall a year ago that's now solidly in the green.

Interested in tracking this stock as it continues on its path? Add Sirius XM to your Watchlist now, for all the news we Fools can find, delivered to your inbox as it happens. For more detailed analysis and information on Sirius, consider subscribing to The Motley Fool's new premium research service. For less than the cost of one typical trade, you'll get a year's worth of timely, regular in-depth updates on your favorite stock. Click here to get started today.