In recent months, investor perception has largely been that Apple (NASDAQ:AAPL) is stumbling while Samsung is having the time of its life. That belief is being perpetuated by negative associations surrounding Apple while Samsung is being shown in a positive light, although in absolute terms Apple still earns more than Samsung by a long shot.

This discrepancy is underscored by looking at investor reaction to sales milestones for each company's latest flagship smartphones: the iPhone 5 and Galaxy S4.

What did you expect?

The day that Apple announced that it sold 5 million iPhone 5 units during launch weekend was the day that Apple began its prolonged plunge that would end up slicing off 45% of the company's value over the subsequent seven months (the stock has since rebounded from its lows). That was 5 million units sold in a matter of three days, yet investors were disappointed because they were expecting the iPhone maker to sell anywhere from 6 million to 10 million units based on pre-order activity.

In contrast, Samsung said earlier this month that it was approaching 10 million in channel unit sales for the Galaxy S4, a threshold that the South Korean company proceeded to cross the following week. Samsung actually sold off following the Galaxy S4 unveiling while Apple rallied, as investors weren't impressed with the Galaxy S4's iterative update and gimmicky features.

Samsung shares have mostly recovered since, and remain near its highs, while Apple remains near its lows.

Simply put: investors were disappointed with Apple selling 5 million iPhone 5 units in three days, but are impressed with Samsung selling 10 million Galaxy S4 units in a month. Also, don't forget that Samsung's figures are channel sales reported on a sell-in basis. Since Samsung relies heavily on third-party distribution, adjusting for sell-through has more meaningful (and negative) impact than for Apple.

There are other examples of lofty expectations and tough comparisons weighing on the Mac maker. For instance, headlines that Apple's second quarter profit was down 18% weren't as impressive sounding as Samsung's bottom line soaring 42%. Combining those two year-over-year comparisons led to sensational headlines like "Samsung Profit Hits Record High As Apple Collapses," among others. However, in absolute terms, Apple's net income still beats Samsung's by a long shot. 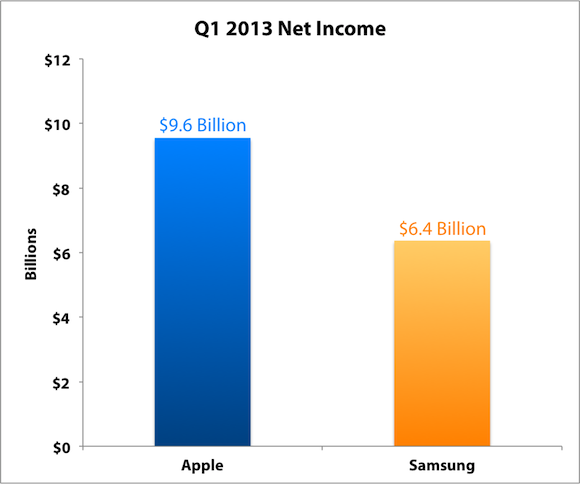 Will investor sentiment about Apple ever turn around?