What: After taking a beating last year, shares of Noodles & Company (NASDAQ:NDLS) got 2016 started off right, gaining 24% as enthusiasm built for the company's turnaround potential. As you can see from the chart below, the jump came largely from a handful of sessions during the month. 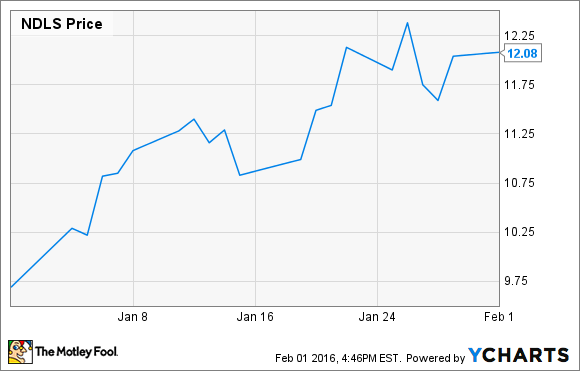 So what: The fast-casual chain's first bump came on Jan. 6 when shares gained 6% as the company touted its "Made. Different." platform, which promotes its healthy meals and fresh ingredients. Noodles revamped its website to make nutritional information easier to interact with. Other additions included a gluten-free cheese sauce and a free kids meal on Thursday nights in January.

Two weeks later, the stock jumped another 10% likely in response to the company's presentation at the ICR Xchange Conference, where it sold investors on its new platform and other changes it's making. The stock was also upgraded to "hold" by Zack's Investment Research.

Now what: Nothing in last month's surge really offers evidence of improving performance at the struggling pasta chain. Shares are still down 70% from post-IPO highs as the company has put up flat same-store sales and missed earnings estimates in its last quarterly reports.

In order for the stock to continue bouncing back, Noodles will have to prove its innovations are driving growing profits and same-store sales. The company may need more than an interactive website and a couple of new menu items to galvanize the brand to live up the expectations of its IPO. We'll know more when the company reports fourth-quarter earnings later this month. The bar is set low as analysts are expecting breakeven earnings per share.