With each passing year, a handful of the world's best-selling drugs lose patent protection, and when that happens it can blow a hole in the top line of even the largest drugmakers. To help offset the revenue decline, many big pharma companies shell out billions of dollars on acquisitions in an effort to build out their portfolio of products and stabilize their sales.

Whenever an acquisition is announced, the shares of the targeted company tend to skyrocket, and any investors who were smart enough (or lucky enough) to have bought the stock before the acquisition announcement tend to score a huge profit.

Knowing that, we reached out to a team of our Motley Fool healthcare analysts and asked them to share a company that they think could be the shopping list of one of the big boys in the industry. Read on to see what companies they singled out.

Kristine Harjes: Johnson & Johnson’s (JNJ -1.86%) CEO Alex Gorsky has been very upfront about wanting his company to engage in M&A but keep a focus on small opportunities. Gorsky is looking for “the next Imbruvica… the next Darzalex… the next minimally invasive surgery platform with a contact lens,” as he put it at this year’s J.P. Morgan Healthcare Conference. Once such an opportunity is found, Johnson & Johnson can then leverage its expertise to grow it into a blockbuster drug.

It seems like no secret to me where this next opportunity lies: Johnson & Johnson has already expressed interest in small-cap Geron (GERN -8.45%) and its lead compound imetelstat. Imetelstat in phase 2 studies for a treating myelofibrosis -- and based on data so far, it looks like if it clears FDA approval it has a good shot at displacing the current new standard of care.

Why would Johnson & Johnson take the plunge and acquire Geron? I’d argue that the value proposition is extremely strong. While it’s hard to measure the valuation of a company without any revenue, Geron’s sub-$500 million market cap is tiny for a company with a promising compound that could become the big dog in a $2 billion market.

Plus, Johnson & Johnson has already invested $35 million as an upfront payment in a collaboration agreement with Geron on imetelstat. And that’s just the beginning. The agreement also puts Johnson & Johnson on the hook for up to another $900 million in potential milestone payments -- the sum of which, I’ll point out, is double Geron’s market cap. If Johnson & Johnson believes imetelstat will continue its promising track, the pharma giant would be remiss to pass up on buying Geron in its entirety now.

Brian Feroldi: One company I could easily see catching a buyout offer is Acadia Pharmaceuticals (ACAD -5.92%). Currently, Acadia is still just a clinical-stage biopharma, but that could change later this year if its lead compound, Nuplazid, manages to win regulatory approval. The drug is currently in the FDA's hands as a potential treatment for Parkinson's disease psychosis, and its PDUFA date is May 1, so we won't have to wait long to see if the drug will find its way to market.

I think the odds of an approval are quite good. An FDA advisory committee recently voted 12-2 in favor. and voted on whether they think the drug should win approval. While those results don't guarantee an FDA approval, I'd argue that they tilt the odds toward success.

Nuplazid also has other attributes going for it that may sway the agency's decision. Currently there are no approved products to treat Parkinson disease psychosis, which is one of the reasons the FDA gave Nuplazid both the breakthrough therapy and priority review designations. That indicates that regulators are well aware of the lack of treatment options and are eager to bring one to market.

If all goes well for Nuplazid, it looks like it could be a blockbuster. Analysts see peak sales in excess of $3 billion, which could prove to be a conservative number if Nuplazid also wins label expansion claims for Alzheimer's disease psychosis or schizophrenia. I think that's a big enough number to grab the attention of many big pharma companies, and that's why it wouldn't surprise me one bit to see one of them make an offer to buy Acadia outright.

Cory Renauer: Now that Ireland-domiciled Jazz Pharmaceuticals (JAZZ -3.15%) stock has left the stratosphere, it's at the top of my potential big pharma buyout list. Its enterprise value -- a metric that accounts for market cap, debts, and cash -- of around $7.4 billion is in the Goldilocks zone for big American pharmas looking to lower their tax burden and pick up a company with strong earnings growth. 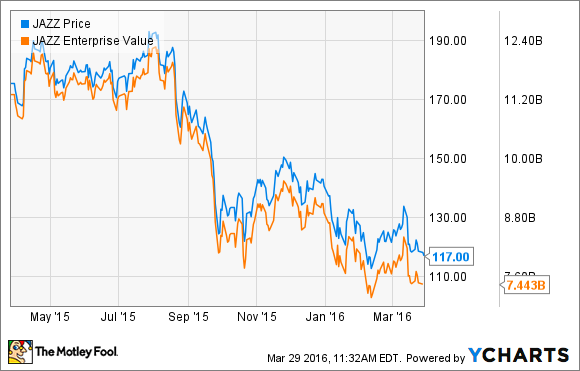 Sales of Jazz's top product, Xyrem, for treatment of narcolepsy symptoms grew about 23% to $955 million last year. Before we hear of any offers, one important event needs to play out.

While Xyrem has been a spectacular growth driver, it's also the subject of ongoing patent legislation. Jazz holds 20 Xyrem patents, but not the almighty composition-of-matter patent.Smelling an opportunity, seven different drugmakers have filed applications for approval of generic versions, although Jazz insists its patents will stand up for the drug that made up about 73% of the company's total sales last year. Potential suitors are right to be concerned.

Last summer, the Patent Trial and Appeal Board began proceedings involving six Jazz patents regarding distribution of Xyrem. The company expects a decision in mid-July. If the judge rules strongly in favor of letting Jazz maintain Xyrem exclusivity, expect acquisition offers to pop up like dandelions.

If judges rule unfavorably for Jazz, and Xyrem begins facing generic competition, there's still a chance some suitors could come calling later in the year. Jazz is awaiting phase 3 results for JZP-110, a candidate for both narcolepsy and the much wider obstructive sleep apnea indication. If approved for both, it could top Xyrem's success. Results from this trial aren't expected until the end of the year, so we'll have to wait a bit longer to see how it plays out.

Cheryl Swanson: Big pharma companies, like all of us, enjoy bargains. And gene therapy company Bluebird Bio (BLUE -8.01%) is flashing blue-plate special pricing right now, making this company a much more enticing takeover target. While the clinical-stage biotech is no stranger to takeover speculation, no one could call Bluebird a bargain last year. Inflated expectations sent the stock up 750% in less than two years, to reach an all-time high last summer.

Bluebird has since fallen out of favor with Wall Street, however. In November, a somewhat disappointing update on Bluebird's Lenti-D phase 2/3 trial had analysts slashing price targets to the bone. The question now is whether the clinical-stage biotech could bounce back, especially since more definitive data is due on the Lenti-D program in a few weeks at the American Academy of Neurology conference.

Whatever that data shows -- or analysts assume it to show -- Bluebird has another asset much more important to big pharma buyers. Along with Kite Pharma (NASDAQ: KITE) and Juno Therapeutics, Bluebird is a leader in CAR-T therapies, often touted as the next big thing in cancer treatment. Late last year, preliminary studies from the National Cancer Institute showed selective data on Bluebird's CAR-T cancer program that was impressive. One advanced cancer patient with multiple myeloma experienced a complete remission eight weeks after treatment. Celgene has already opted into Bluebird's first CAR-T clinical trial, handing over $10 million to jump in, which could end up a "try before you buy" deal. There's no guarantee Bluebird is on the right track with its curative drugs. But the well-funded company is now trading at less than twice its cash level, making it the kind of bargain not often seen in smaller biotechs with a highly promising pipeline.

Todd Campbell: I think Cheryl is on to something with her theory that formerly white-hot stocks working on next-generation CAR-T cancer therapies could be the focus of future M&A, but I think that it's Kite Pharma that's the more likely buyout candidate.

Kite Pharma is conducting a pivotal phase 2 trial of KTE-C19, a CAR-T therapy targeting diffuse large B-cell lymphoma (DLBCL), and interim results are expected this year. Kite Pharma thinks that solid interim data could allow it to file for FDA approval ahead of final data in 2017. If so, then Kite Pharma could conceivably have its first CAR-T on the market next year.

That accelerated timeline could be very attractive to a large biopharma, such as Gilead Sciences or Amgen (AMGN -0.57%) -- two companies that might otherwise balk at forking out big money to buy an early stage cancer company.

Adding conviction to my thinking is that Kite Pharma's C-suite is packed with people who have been previously associated with M&A. CEO Belldegrun was at Cougar Biotechnology when J&J bought it. CFO Butitta was CFO of NextWave when Pfizer bought it in 2012. and, Chief Commercial Officer Shawn Cline Tomasello worked for Pharmacyclics when AbbVie bought it. The list goes on and on.

Who might acquire Kite Pharma is anyone's guess, but Amgen is already collaborating with the company, and Kite Pharma's chief medical officer, David Chang, is the former head of oncology at Amgen.

Sean Williams: The air has been let out of a number majority of biotech stock valuations in 2016, which is beginning to make this industry quite attractive from a possible takeover standpoint. One company that I suspect could begin to draw some interest, and a possible buyout, is Radius Health (RDUS -0.85%).

The lynchpin of Radius Health's portfolio is abaloparatide, a once-daily injectable therapy designed to treat osteoporosis. Wall Street and Radius' shareholders had anxiously been waiting for Amgen and its partner UCB to report late-stage data on romosozumab, a once-monthly injectable solution for osteoporosis that was viewed as abaloparatide's greatest competitor. In February Amgen and UCB delivered. Their late-stage trial hit both co-primary endpoint of reducing the relative risk of vertebral fractures through 12- and 24-months by 73% and 75%, respectively. However, romosozumab did not reach clinical significance in a secondary endpoint of reducing relative risk of non-vertebral fractures in the 12- or 24-month periods examined.

On the other hand, abaloparatide reduced vertebral fractures by 86% in the ACTIVE study at the 18-montn mark, and it did lead to a statistically significant reduction in non-vertebral fractures of 43%. In other words, Radius Health's lead drug looks as if it has a clear path to superiority. This could very well make it an attractive asset for a larger drugmaker to acquire.

Additionally, Radius Health is more than likely looking for a partner in Europe that'll help market abaloparatide. In effect, it's actively seeking a world-renowned drug giant to for assistance, or perhaps a buyout. While nothing is written in stone, I'd keep a close eye on Radius as a buyout candidate within the industry.